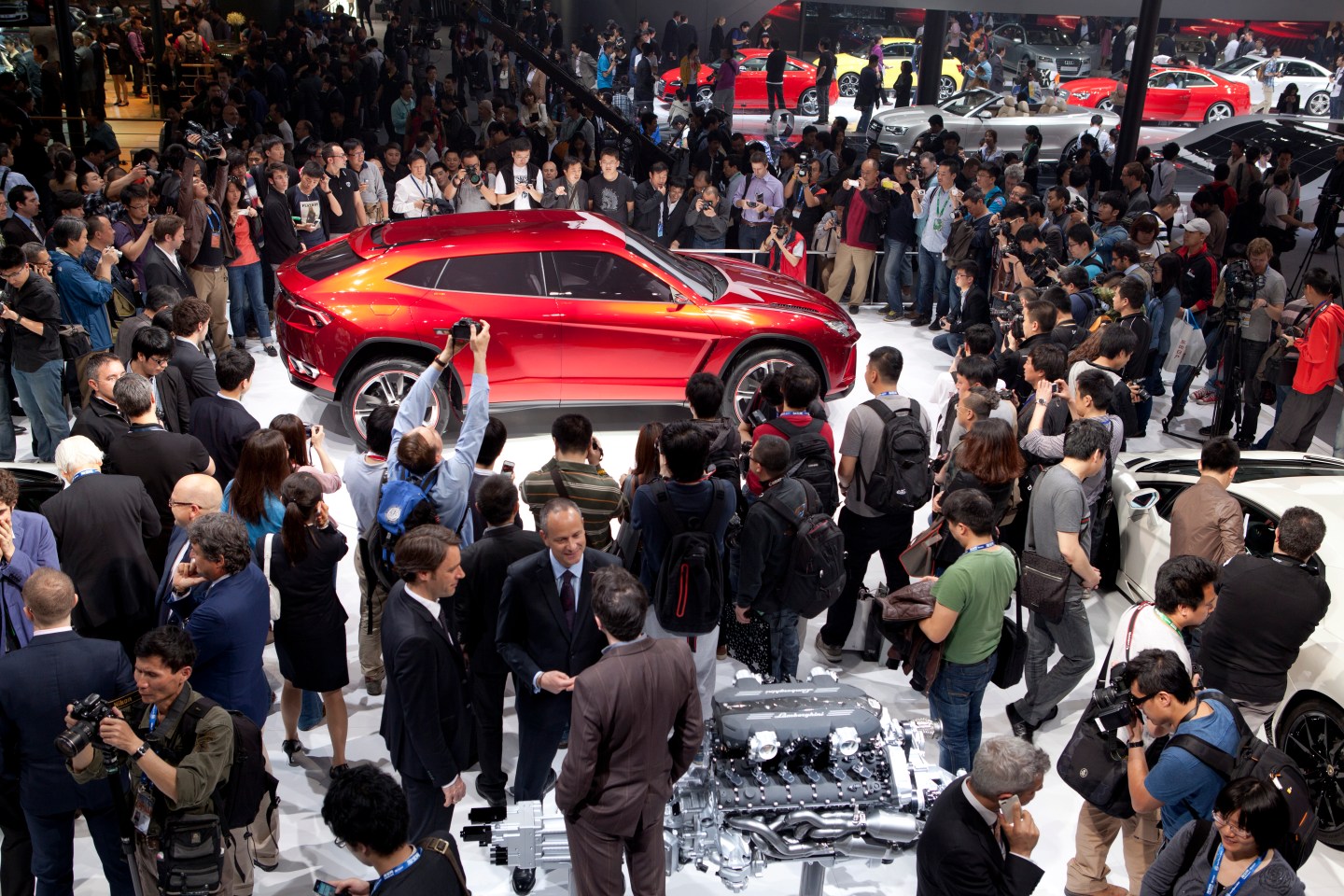 Earlier this summer, Lamborghini, the Italian supercar brand that counts annual car sales in the thousands but price tags in the hundreds of thousands, announced it was building a sport utility vehicle. The angular-looking concept version called Urus, unveiled for the first time in Beijing in 2012, had the same built-for-playboys appearance as Lamborghini’s cars: sharp lines, wide rims, race-car aesthetics. Blogs marveled at the specs: it houses a 600-horsepower engine and sports ample ground clearance despite its relatively modest height (just shy of six feet).

Lamborghini already tried and failed once to market a popular SUV in the 1980s, with what became the Hummer-like LM002. This time Lamborghini is more confident.

It says SUV sales will double total Lamborghini sales practically overnight, to 6,000 vehicles a year, and diversify a famously un-diverse company. The idea: Customers who own its supercars, but drive another company’s luxury SUV when they need more space beyond a tiny front-trunk, would upgrade to a Lambo SUV with the same Italian styling.

After Lamborghini starts selling the Urus in 2018, many may pop up in Manhattan or Los Angeles. Probably many in Moscow, too. But the biggest potential market for the SUV is located in China, where Chinese tastes are boosting and even influencing luxury goods makers more than ever, and automakers most of all.

Looking to China for growth

Lamborghini’s SUV provides a window into what’s happening at several industries relying on China for growth even as its economy slows. Lost amid the talk about China’s sputtering economic engine is that the rise in consumer spending is a big reason why the headline GDP growth figures aren’t worse than they are. In the first half of the year, for instance, consumer services grew almost 8.5%, while industrial output lagged behind at 6.1% growth, according to China’s National Bureau of Statistics. Services are now 50% of GDP, trailing the U.S.’s 80% figure, but still growing. Chinese consumers are ever more powerful.

Multinationals, in turn, play to Chinese tastes in everything from electronics (the Chinese were a big reason for gold iPhones and gold Apple watches, Apple CEO Tim Cook has said) to food (Coke’s Chinese hit, a milky orange drink, may expand abroad) to cars.

Lamborghini said it is offering an SUV because SUVs are a hot seller in general. “The SUV segment is still fast growing worldwide,” Lamborghini’s CEO Stephan Winkelmann told Autoblog this month.

So Winkelmann could have said, more directly, ‘China, our second biggest market after the U.S., is falling in love with SUVs and we don’t dare miss that.’

China loves SUVs and all they stand for—elevated status on the road, a sense of power, the freedom to take a hard right out of city traffic and scale the nearest mountain. In the first quarter almost half of new vehicle registrations in China were for SUVs. China is now the largest SUV market in the world. SUV sales rose more than 30% in the country last year while passenger cars sales climbed only around 10%, says China’s Association of Automobile Manufacturers. Anecdotally, you also hear that luxury SUVs are less ostentatious than luxury sedans—good at a time when there’s an anti-corruption movement underway in the central government.

Porsche is the exemplar of this new automotive thinking. In the wealthy areas of Beijing and Shanghai, Porsche Cayenne SUVs appear to be parked on every corner. Last year Porsche shipped almost one-third its total Cayenne production to China, easily the SUV’s largest market, helping Porsche’s overall China sales increase by 25%. Since 2010, Porsche has almost tripled its sales in China, where its sales trailed the U.S. last year by fewer than 100 vehicles.

Porsche has had remarkable success selling the large Cayenne there. But as the numbers of China’s rich expand and the country’s anti-corruption campaign continues targeting conspicuous consumption, Porsche has offered another, cheaper option. The Macan SUV was released in 2014, equipped with an optional four-cylinder engine, Porsche’s first in two decades, and sold for almost 50% less than the Cayenne in China partly because of reduced taxes on engine size. The Macan sold more vehicles in China— 9,374— than any other country in its abbreviated first year, says researcher IHS, which estimates China sales of the model to triple to 29,376 in 2015.

Porsche isn’t the only automaker changing its lineup in ways that align with Chinese demand. BMW and Mercedes Benz have also offered smaller versions of their SUVs. Ford, meanwhile, is re-introducing the boat-sized Lincoln Continental with China squarely in mind. “This is not a vehicle we developed for the U.S. and then said, ‘We will see how it does in China,'” a Ford group vice president told the Los Angeles Times this year. “The rear seat was designed for the Chinese customer first and foremost.”

For now, Ford designing explicitly for China remains the exception, not the rule. “Lamborghini and others are building for Chinese buyers but keeping tightly faithful to their original heritage and brand cues,” Michael Dunne, CEO of Hong Kong-based auto consultant Dunne Automotive, wrote in an email.

But there’s evidence automakers like Lamborghini are making decisions with China close in mind.

That breadth gives Volkswagen economies of scale, and the company is developing new Lamborghini and Bentley SUVs on the same architecture as the next Porsche Cayenne. “Small investment but big profit return—that maybe the biggest influence for VW group to roll out” Lamborghini’s SUV, says Boni Sa, senior consultant at IHS Automotive in Shanghai. “We do expect the Lamborghini SUV to incentive the sales of Lambo in China.”

“Of course the new car will make use of the synergies the Volkswagen Group offers,” says Lamborghini spokeswoman Liu Na. “Nevertheless it will be a true Lamborghini in line with our brand DNA.” Bolstering her point: Lamborghini, Porsche, and Bentley’s SUVs will be built at home in European factories—which, for Chinese consumers, is a big part of the prestige of buying one.

Many have pointed out that Lamborghini picking Beijing to unveil the concept version of its SUV several years ago was no accident. The Urus should be released in the world’s hottest market for SUVs.

Now the only question is if Chinese buyers will like it.