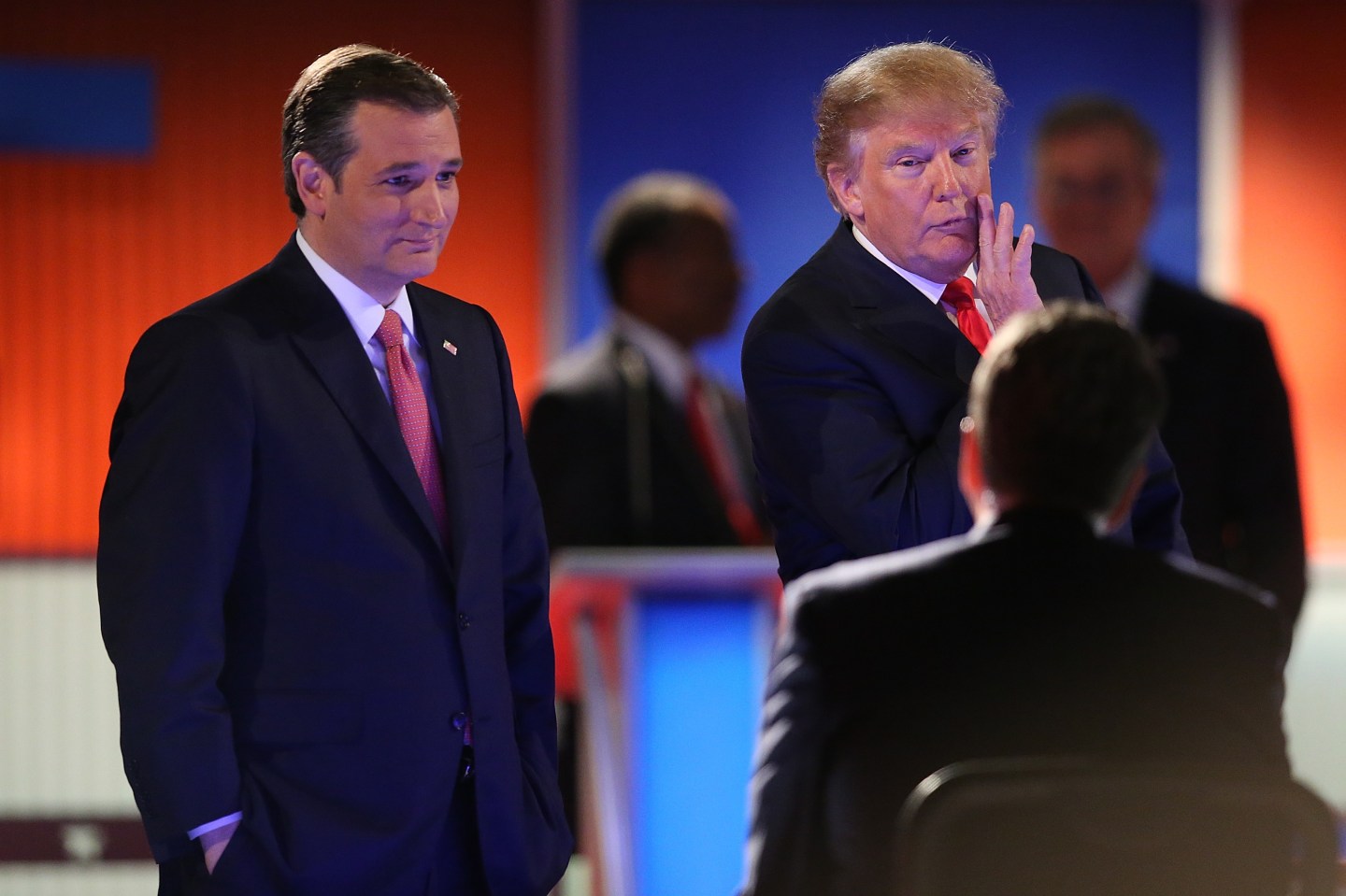 NORTH CHARLESTON, SC - JANUARY 14: Republican presidential candidates (L-R) Sen. Ted Cruz (R-TX) and Donald Trump speak to the moderators during a commercial break in the Fox Business Network Republican presidential debate at the North Charleston Coliseum and Performing Arts Center on January 14, 2016 in North Charleston, South Carolina. The sixth Republican debate is held in two parts, one main debate for the top seven candidates, and another for three other candidates lower in the current polls. (Photo by Scott Olson/Getty Images)
Photograph by Scott Olson — Getty Images

In an interview on ABC’s “This Week” with George Stephanopolous, Donald Trump attacked Ted Cruz’s likability.

“He’s a nasty guy. Nobody likes him,” Trump said in the interview. “Nobody in Congress likes him, nobody likes him anywhere once they get to know him.” This is just the latest installment in a heated rivalry between the two Republican candidates.

Trump questioned Cruz’s eligibility to run for president, since the Texas senator was born in Canada. The issue was raised during the last Republican debate, after a lawsuit claimed Cruz didn’t meet the constitutional requirement limiting the presidency to “natural-born” citizens. The New York Times reports that the suit, filed by 85-year-old trial lawyer Newton Schwartz Sr., wants the Supreme Court to concretely define the phrase.

Trump, who has previously said that Cruz is eligible because his mother is American, told Stephanopoulous that he’d considered filing a lawsuit himself, saying, “I’d like to talk to Ted about it, see how he’d feel about it. ‘Cause you know, when I file suits, I file real suits.”

As for Cruz’s competence as a leader, Trump said, “He’s got an edge that’s not good. You can’t make deals with people like that.” Trump himself has lost numerous deals as a result of his edgy campaign.

Trump’s Twitter feed underscores his focus on beating back Cruz’s campaign. In a rant on the social media site, he described his fellow Republican as a dishonest hypocrite and invoked 9/11 to turn Cruz’s attack about Trump’s “New York values” back on him.

Ted is the ultimate hypocrite. Says one thing for money, does another for votes. https://t.co/hxdfy0mjVw

Everybody that loves the people of New York, and all they have been thru, should get hypocrites like Ted Cruz out of politics!

Is this the New York that Ted Cruz is talking about & demeaning? pic.twitter.com/rYGX9vazku