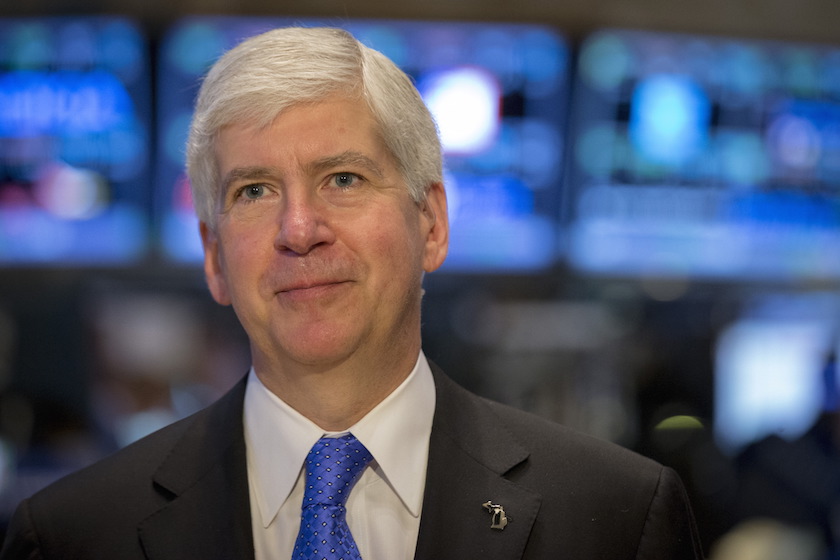 Michigan Governor Rick Snyder gives an interview on the floor of the New York Stock Exchange May 8, 2015. Snyder, a Republican, will not run for U.S. president in 2016, Politico reported on Wednesday, citing two sources familiar with his planning. REUTERS/Brendan McDermid - RTX1C4SZ
Brendan McDermid—Reuters

As National Guard troops patrol Flint handing out bottled water, Michigan Governor Rick Snyder defended his handling of the crisis and defied calls for him to resign.

“As soon as I became aware of elevated lead levels in blood,” Snyder said on Jan. 14 in an exclusive interview with TIME at his office in Lansing, “we took action.”

The crisis in the struggling industrial city of 100,000 dates to April 2014, when Flint switched its water supply from Lake Huron to the Flint River in order to save money. The river water turned out to be highly corrosive to the city’s pipes, leaching toxic levels of lead into water being used for drinking, cooking and bathing. Shortly after the switch, residents began complaining of discoloration in the water, bad odors and health effects like headaches and rashes. Last summer, researchers at Virginia Tech found that the water in some homes contained enough lead to be considered toxic waste. On Jan. 5, months after testing revealed the city’s water supply was unsafe, Snyder declared a state of emergency. Nine days later, the governor announced that he had asked the Obama administration to designate the county surrounding Flint as a federal emergency area.

What the state and its governor, a Republican who was re-elected in 2014 after helping Detroit emerge from bankruptcy, knew and when they knew it have emerged as critical questions as the crisis stretches into its 19th month. Residents and a growing number of local and national officials have accused Snyder of ignoring a public health emergency, with some calling for him to step down as a result.

In an interview with TIME shortly before he announced the federal emergency request, Snyder says he first knew about potentially serious problems with the water supply on Oct. 1, 2015, when testing by state environmental officials confirmed elevated levels of lead. Pressed on whether that was the first time he became aware of any concern with Flint’s water, Snyder says, “Obviously, I knew there were water issues in Flint. But did I know there were unsafe blood levels? No.”

In a recently-released email from July 2015, Snyder’s former chief of staff, Dennis Muchmore, wrote to a state health department official that he was concerned that Flint residents believed they were getting “blown off” by state officials. Snyder says the email shows that his office was not neglecting the city, and Muchmore was “concerned that we were getting straight answers so he asked tough questions and he got answers.”

Asked if he waited too long to declare a state of emergency, Snyder defended the state’s response. “There was some time period where we were offering filters, we were working hard to get water. All these kind of things. But not enough of it was being accepted. Now we’re to the point now where hopefully we’re fully engaged and have everyone working hard to make sure everyone in Flint has access to a water filter.”

Snyder did fault the Michigan Department of Environmental Quality, which repeatedly told Flint residents the water was safe to drink despite reports within the department that some Flint homes showed extremely high lead levels, for “being probably too technical in their interpretation of things or following a traditional pattern of doing things rather than stepping back to look at what else you might see in data.”

“There were issues in terms of getting appropriate answers,” Snyder tells TIME. “That was unfortunate. It would’ve been good to have that information sooner. And I am responsible for those people. I don’t deny that.”

Flint has since stopped using the river for its water, but concern remains that the system’s pipes will continue to release lead. State officials are now focused on providing water filters and drinking water to Flint residents. But protesters, who marched onto the Michigan Capitol Building Thursday, say they’re going to keep the pressure on the governor, who admits that it will be a challenge to regain residents’ support.

“We are working hard to earn their trust back,” Snyder says. “I can appreciate the concerns that they have and we’re trying to work hard to show them that we really do care.”