Airbus Now Has $1 Trillion Worth of Jets on Order 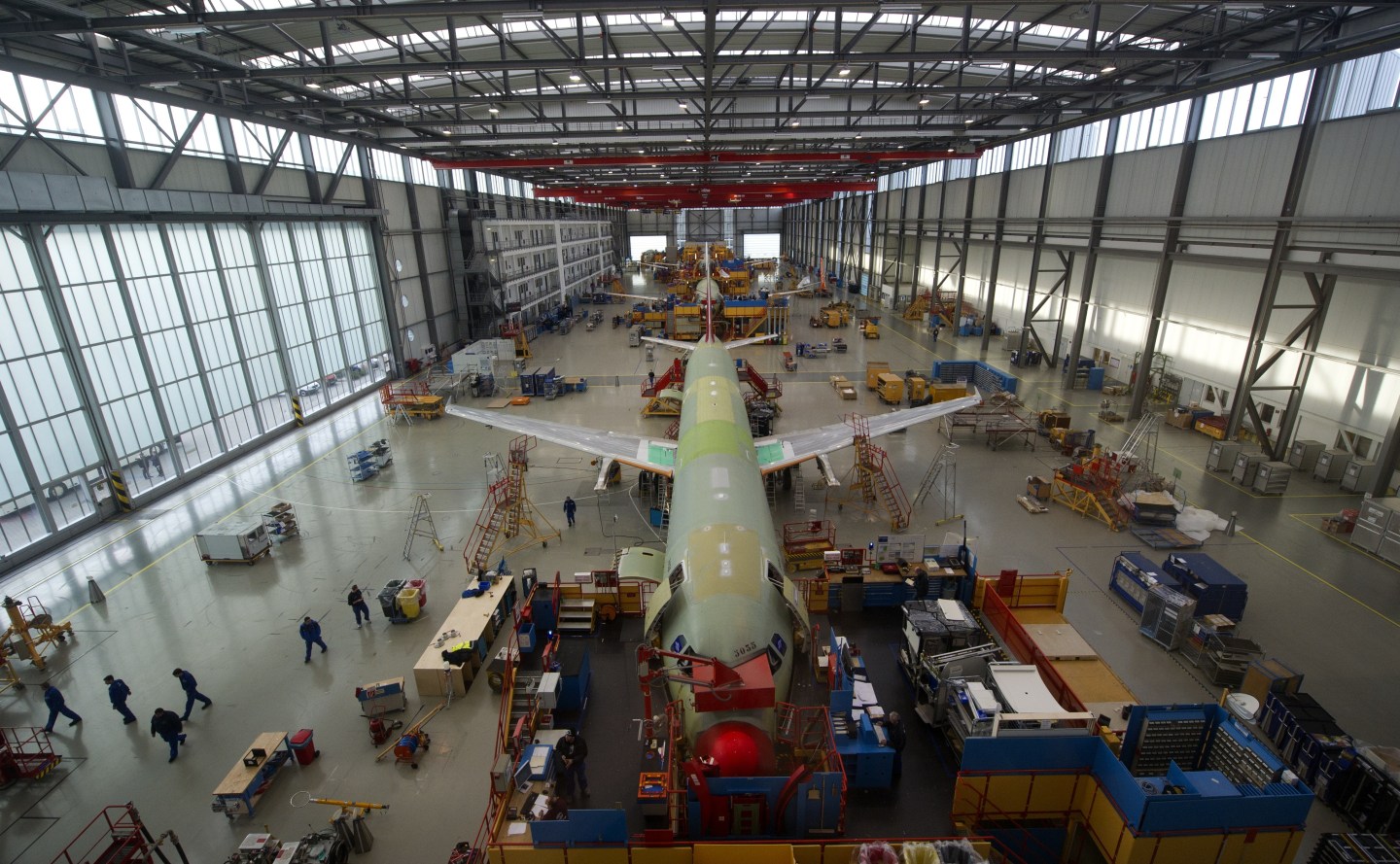 Employees of aircraft manufacturer Airbus work on an Airbus A320 plane under construction at a production hall of Airbus in Hamburg, northern Germany. A new Airbus factory has been unveiled in Alabama, setting itself up for a fierce fight with Chicago-based Boeing.
Photograph by Johannes Eisele—AFP/Getty Images

On Tuesday, European aerospace giant Airbus (EADSY) announced it had drummed up 1,036 plane orders last year, figure that has the company soundly beating rival Boeing (BA) in 2015. Pushing Airbus’s total order backlog to a record-setting 6,787 aircraft, the new orders mean the company has roughly $1 trillion dollars worth of new airplanes slated for delivery over the next decade.

But orders are one thing, finished commercial airliners another. Boeing retains the title of world’s biggest plane maker for at least another year, as Airbus still lags its chief rival on deliveries. In fact, Boeing bested its own record for aircraft delivered in 2015, handing over 762 commercial airplanes to customers, 39 more than the previous year. Meanwhile, Airbus managed just 635 deliveries in 2015.

As airlines across the globe continue to retooling their fleets with newer, more fuel-efficient aircraft, both Airbus and Boeing continue to ramp up production. But rising interest rates and continued low oil prices could blunt the unprecedented demand that’s driven the duopoly’s combined backlog to more than 12,000 total jets, analysts say.

The impact of low oil prices is already be manifesting itself, says Richard Aboulafia, vice president for analysis at aerospace consultancy Teal Group. Compared with the previous year, both companies saw orders slow in 2015—even as Airbus’s total backlog reached new highs for the industry. “With oil at $33 a barrel, retirements [of old aircraft] are doing exactly what they should be doing, which is declining fast,” Aboulafia says. “That means maintaining the upward angle of production as planned would be ill-advised.”

But that hasn’t stopped either Boeing or Airbus from forging ahead with plans to deliver even more aircraft in 2016. For its part, Airbus plans to deliver 650 total aircraft in 2015–15 more than last year–even as some of its new production lines continue to suffer growing pains. The company plans to produce 50 wide-body A350 jets this year, an astounding figure when you consider it only delivered 14 of them in 2015 (one shy of its production goal). The first delivery of Airbus’s new, more fuel-efficient A320neo is also running behind schedule, due to supply chain issues.

Boeing also plans to dial up its production numbers in 2016, though it has yet to release production targets for the new year.

Overall, with nearly 1,400 combined jetliner deliveries between the two companies last year, the industry is producing roughly double the planes it did a decade ago. Demand for new jets has been driven jointly by high oil prices, and an increased consumer demand for air travel in growing markets like China, India, and the Middle East.

And the backlog of 12,000 airliners might seem like a guarantee of demand for the foreseeable future, but if rising interests rates tighten airlines’ supply of cheap cash, or prolonged low fuel prices curb the need for more efficient aircraft, it could prove more difficult for Boeing and Airbus to deliver their orders as quickly as they’d like, says Aboulafia.

WATCH: For more on the aerospace industry, watch this Fortune video.

Moreover, given that significant chunks of those backlogs are for new aircraft that are still under development, like Boeing’s 737MAX, the conditions that pushed airlines to place orders in the first place could change drastically by the time the jets are ready for delivery.

The airplane makers themselves seem optimistic that variables like fuel prices are already factored into customer demand. This is because airlines will likely continue upgrading their fleets to more fuel-efficient aircraft, even if fuel prices remains low, Airbus CEO Fabrice Brégier told reporters Tuesday. Airlines “do not expect oil prices to stay low forever,” said Brégier.