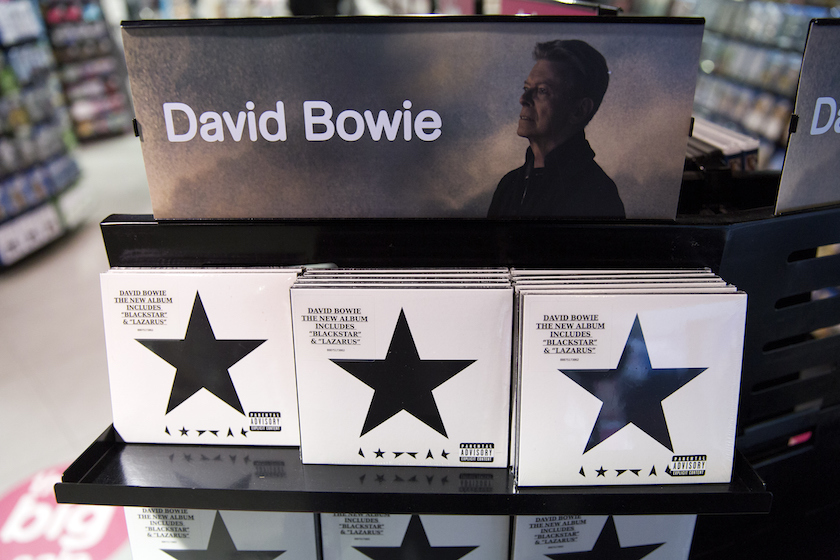 Copies of "Blackstar" the latest album by British musician David Bowie are on sale in a branch of HMV in central London on January 11, 2016. British music legend David Bowie has died at the age of 69 after a secret battle with cancer, drawing an outpouring of tributes for one of the most influential and innovative artists of his time. AFP PHOTO / JUSTIN TALLIS / AFP / JUSTIN TALLIS (Photo credit should read JUSTIN TALLIS/AFP/Getty Images)
Photograph by Justin Tallis — AFP via Getty Images

Sales of David Bowie‘s last album—released two days before his death of cancer—soared on Monday along with downloads of the greatest hits of his storied career.

Streaming giant Spotify said that streams of Bowie‘s music were up 2,700% on Monday.

In the U.K., the Official Charts Company said Bowie‘s Blackstar album already was headed to the top spot on the charts with sales of 43,000 since its release on Friday.

“I knew for a year this was the way it would be. I wasn’t, however, prepared for it,” Visconti wrote on his Facebook page.

Bowie, who framed hits such as “Ziggy Stardust” with daringly androgynous displays of sexuality and glittering costumes, died age 69 on Sunday.

Blackstar was the top-selling album on Apple’s iTunes U.S. and U.K. platforms on Monday morning. The 2002 Best of Bowie compilation album was the second most popular on the U.S. site, outpacing Adele’s blockbuster album 25.

Bowie‘s 1972 album The Rise and Fall of Ziggy Stardust and the Spiders from Mars was in fifth place on the U.S. iTunes platform, according to the site. Apple (AAPL) does not generally release iTunes sales or download figures.

Overall album sales and streaming data in the U.S. will not be available until next week.

On Amazon’s (AMZN) U.K. website, “Blackstar” was the No. 1 “best seller,” while it was the second most popular MP3 download behind “25” on Amazon in the U.S.

Twitter exploded with some 4.3 million Tweets about Bowie‘s death in the seven hours after his death was announced, Twitter (TWTR) said.

Blackstar has only seven songs, but critics praised it, with Britain’s Guardian newspaper calling it “a spellbinding break with [Bowie‘s] past.”

In a music video accompanying the album’s first single, “Lazarus,” the singer is shown in a hospital bed with bandages around his eyes.

“Look up here, I’m in heaven,” he sings. “I’ve got scars that can’t be seen. I’ve got drama, can’t be stolen. Everybody knows me now. Look up here, man, I’m in danger. I’ve got nothing left to lose.”

The album is part jazz but full of what NME described as “warped showtunes, skronking industrial rock, soulful balladeering, airy folk-pop, even hip-hop.”