Fly to Work in The World’s First Autonomous, Human-Size Drone 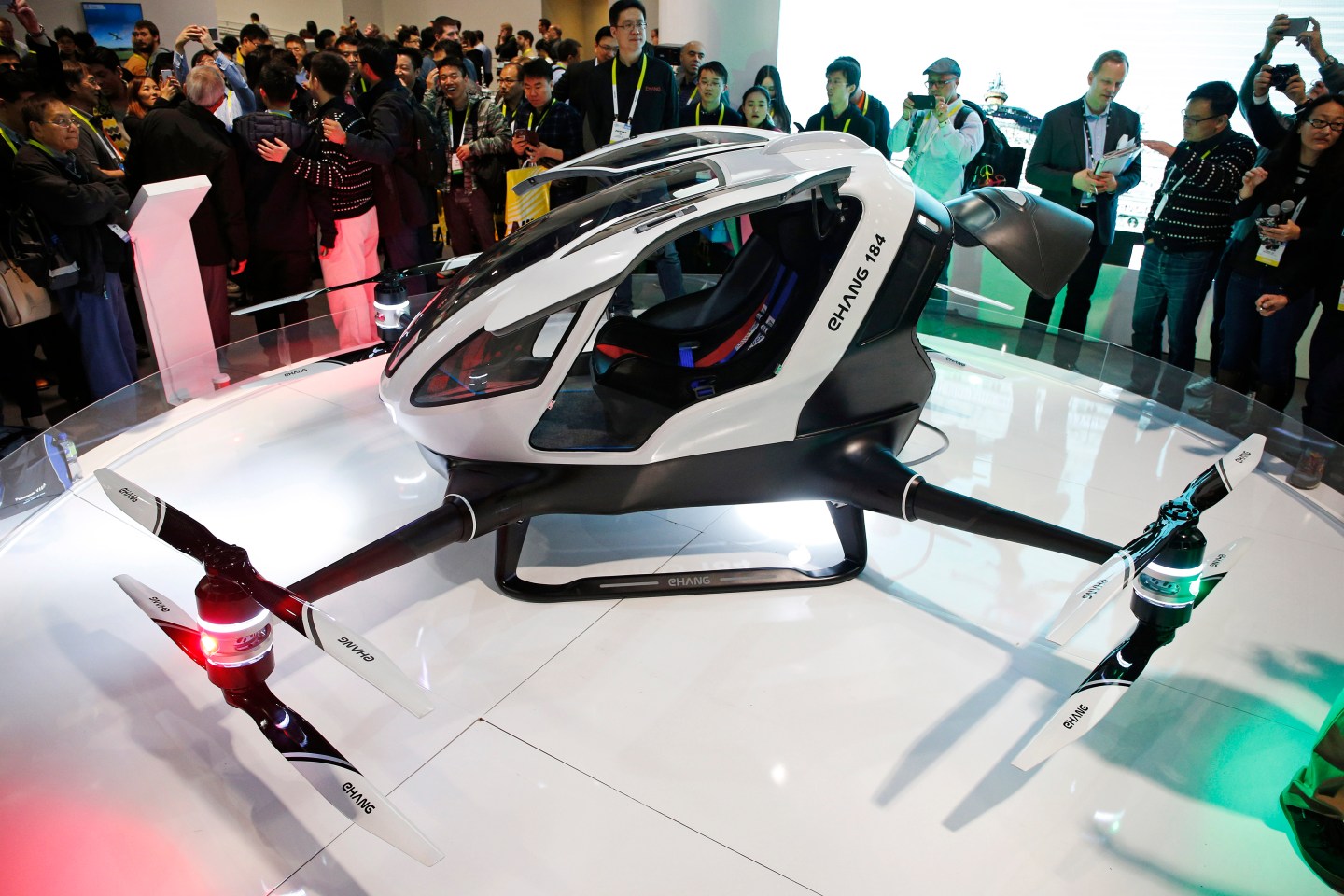 Call off all bets, ladies and gentlemen, because the singularity is here. Florida Gyrocopter Man would be so proud.

On Wednesday at the Consumer Electronics Show, Chinese drone manufacturer EHang unveiled the EHang 184, the first fully electric autonomous aerial vehicle capable of carrying one passenger up to 220 pounds over short distances. Travel is controlled mostly by an onboard tablet inside the pod-like cockpit—a passenger selects their flight destination, and then relaxes in the airborne vehicle’s air-conditioned cabin as the 184 takes off, flies, and lands on its own.

According to company spokespeople showing off the drone at this year’s CES in Las Vegas, 100 successful, manned test flights have already happened in the EHang 184.

The aerial vehicle is certainly something to behold. It’s a four-armed, eight-rotor drone, standing 5 feet tall and weighing in at 440 pounds. The drone has gull-wing doors for passengers, and a trunk for luggage. The arms fold up, allowing for easy parking next to your boss’s BMW convertible. The EHang 184’s battery, which takes between two and four hours to charge, is good enough for a 23-minute flight at a cheetah-like 62 miles per hour.

Naturally, the question of safety in such a vehicle is an open one. With no in-cockpit flying controls for the EHang 184, there’s no way the passenger could steer the vehicle should the tablet fail or cellular connection drop off, as Business Insider pointed out. EHang claims a 24-7 flight control center monitors each flight and can intervene in emergency situations.

WATCH: For more Fortune coverage on drones, watch this video:

Although EHang hasn’t given any indication of when this drone would—or even could—be available for customers, the drone could experience some turbulence in the skies of the U.S., even if the company is billing it as a safer alternative to helicopter flight.

As hobbyist drone pilots found out last fall, the Federal Aviation Administration is requiring all drone fliers to register their unmanned aerial vehicles on a central website. All drone pilots must register by Feb. 19. Already more than 181,000 recreational fliers have registered on the new FAA website. But the online registration process—which is slated to open for commercial and business-related drone pilots in the spring—applies only to drones weighing less than 55 pounds.

MORE: Here’s How Many People Have Registered Their Drones