Managers in Texas Walmarts Now Have to Check for Gun Permits 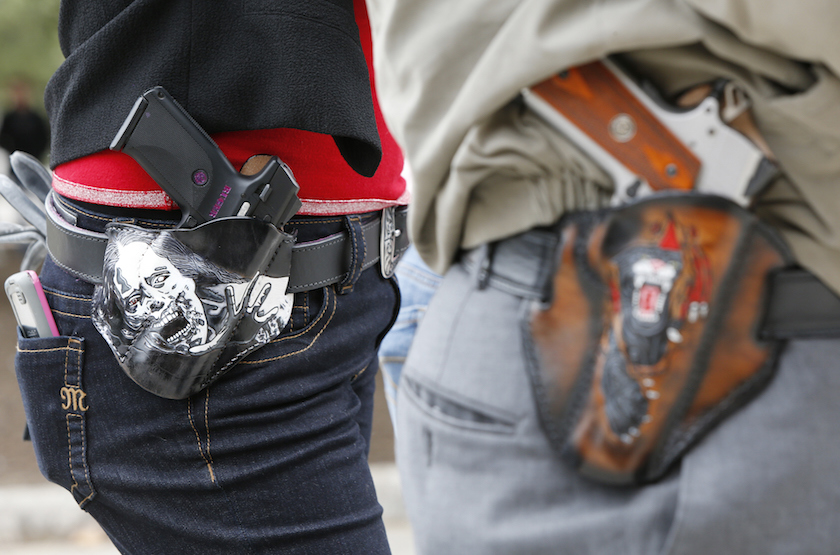 Following a new law in Texas this week that allows licensed people to carry handguns openly in public, Walmart (WMT) store managers there have a new task: asking customers to produce gun permits.

The duty will be limited to managers of Walmart stores that sell alcohol in order to comply with Texas liquor rules prohibiting unlicensed handguns in establishments that sell alchohol to be consumed offsite. An infraction can cost a retailer its liquor license.

Bloomberg reported on Wednesday that ahead of the new Texas law that came into effect this weekend, Walmart had sent a memo last month to stores that sell alcohol, instructing managers to make sure customers openly carrying firearms have licenses. When a cashier or door greeter sees someone with a gun, they are required to let a manager know and that person will then ask to see the paperwork, Bloomberg reported.

“We do try to ensure that people have a licensed firearm,” Walmart spokesman Brian Nick told Fortune. “We are giving direction to our store employees to ask for a license as our management sees appropriate.”

The move could rankle gun-rights activists who take exception to any perceived infringement on their rights by retailers. Starbucks (SBUX) two years ago angered many gun owners when it asked (but did not require) customers to leave guns in their cars when they come in for a coffee, even if they are licensed. Target (TGT) also was criticized by many gun owners for asking them not to openly carry guns even if local laws allow it.

Walmart, the top seller of firearms in the nation, itself angered many such activists last summer when it announced it would stop selling AR-15 assault rifles as well as other modern sporting rifles, citing lower consumer demand for those weapons rather than political reasons.

In Plano, Texas, this week, several stores, including a Chipotle Mexican Grill (CMG), had signs on their doors telling customers they could not bring guns in, despite the new open carry law.

The gun debate presents retailers with tough choices. Many gun-rights advocates say they boycott stores that ban firearms, while gun control advocates are also swift to slam stores that let in customers with guns.

And the battle is certain to keep raging in the wake of President Obama’s announcement this week of his plans for new gun controls.