Volkswagen Wants Its New Electric Microbus to Be Your Buddy 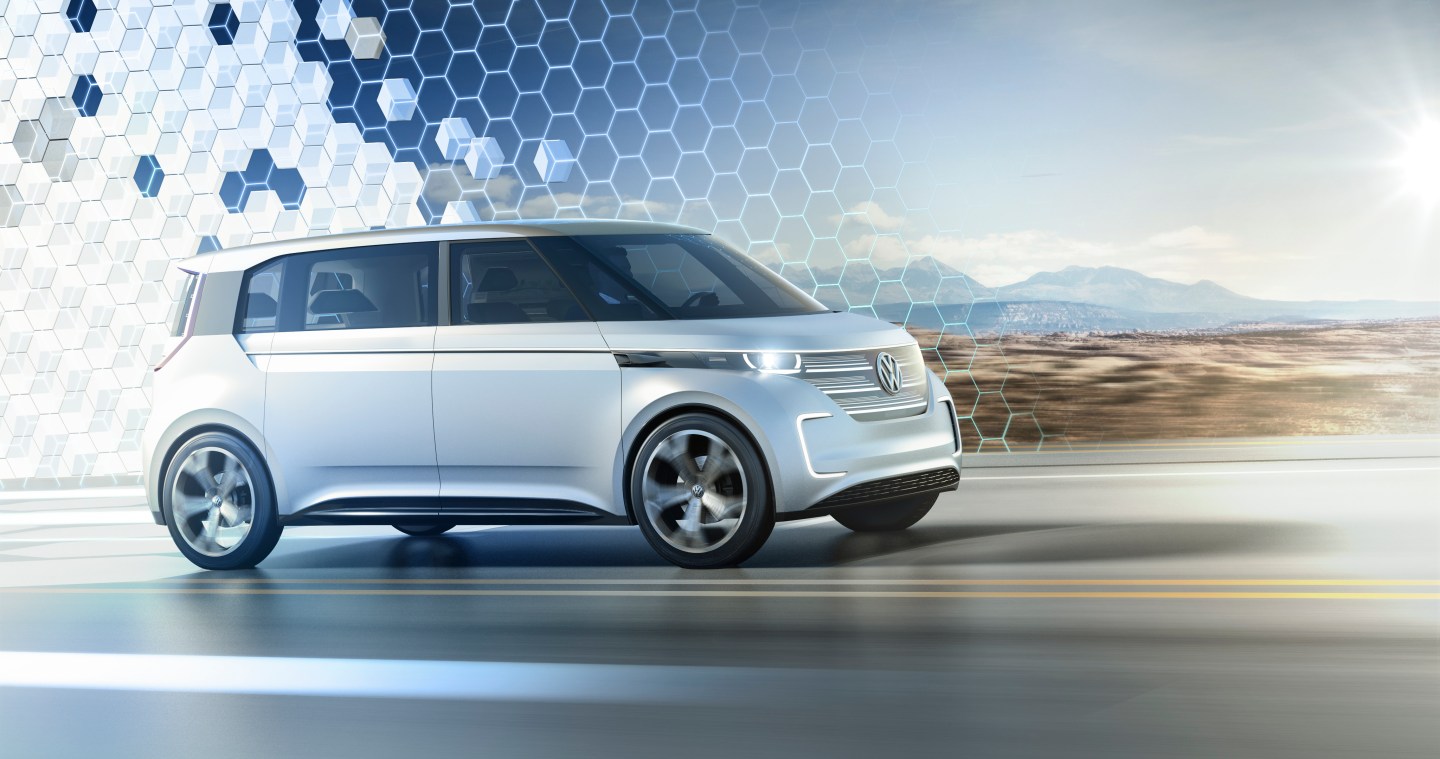 The BUDD.e microbus, a futuristic version of the hippie vans of the 1960s, is intended to show what the company could produce by 2020. The vehicle will have a range of 373 miles, although that number could end up being lower because the European Union test for fuel economy equivalency tends to give higher numbers than the U.S. The battery can be charged up to 80% of its capacity in 15 minutes, about twice as fast as Tesla Motors’ supercharger.

Volkswagen also revealed on Tuesday the e-Golf Touch, a compact car featuring technologies that will be used in production cars in the near future. The hatchback all-electric car was designed to showcase a variety of technologies from touchscreens that users can control by waving their hand and technology that lets drivers wirelessly charge their smartphones.

Volkswagen, which long touted the environmental and fuel efficiency benefits of its now tainted turbocharged diesel injection engines, has wanted to distance itself from the diesel emissions cheating scandal that has eviscerated sales and forced the company to restructure Diess kicked off his keynote with an apology and ended the show with a commitment to fix the emissions problem for good.

As I’ve noted before, Volkswagen’s future depends on its ability to move past the emissions cheating scandal. And that means more than trotting out a concept car—even if it is electric. It means producing all-electric models that include many of the technological advances featured on stage.

Diess laid out a four-part plan for the “new” Volkswagen including a push into electric vehicles. Creating cars that are fully connected to the Internet, autonomous, and customer experience are the other prongs.

But Diess, and others at Volkswagen, also focused heavily on the technology inside the two vehicles shown off on Tuesday. Most people own devices like smartphones, tablets, and smartwatches—and Volkswagen sees an opportunity to integrate those devices into the car.

“The car will become the most important device in the Internet,” Diess said during the keynote.

Concept cars often show where a company is headed in a few years. If that’s the case, expect future Volkswagen vehicles to be loaded with touchscreen displays, wireless Internet, and interiors designed to connect drivers and passengers with the outside world. Passengers in the microbus, for example, will be able to control the air conditioning and lights at home. And the cars are also meant to create a social experience. Passengers on a road trip could, for instance, take information from their smartphones and tablets and integrate into one large touchscreen in the microbus.

“Now instead of staring at your phone, you can experience the journey as a group,” Diess said.

The technology featured in the e-Golf Touch (pictured below) such as the new infotainment system with gesture control will be used in future Volkswagen compact cars.

Other tech that could end up in cars in the next two years includes wireless charging for smartphones in the back seats, a hands-free microphone, and rear speakers that amplify voices—making it easier for the driver and front-seat passenger to talk to back-seat passengers. Another idea is a tablet app to control most infotainment. Passengers can connect a tablet via the vehicle’s Wi-Fi hotspot to control radio, all media sources (USB, CD, DVD, hard drive, online song search) and factory-installed navigation. The media control app, which is in its third version, will debut this summer in Europe.

Volkswagen also talked about intuitive smart home-to-car connections, including the ability to check what’s in your fridge from the car’s dashboard. It’s also possible to see and talk to someone standing at your front door.