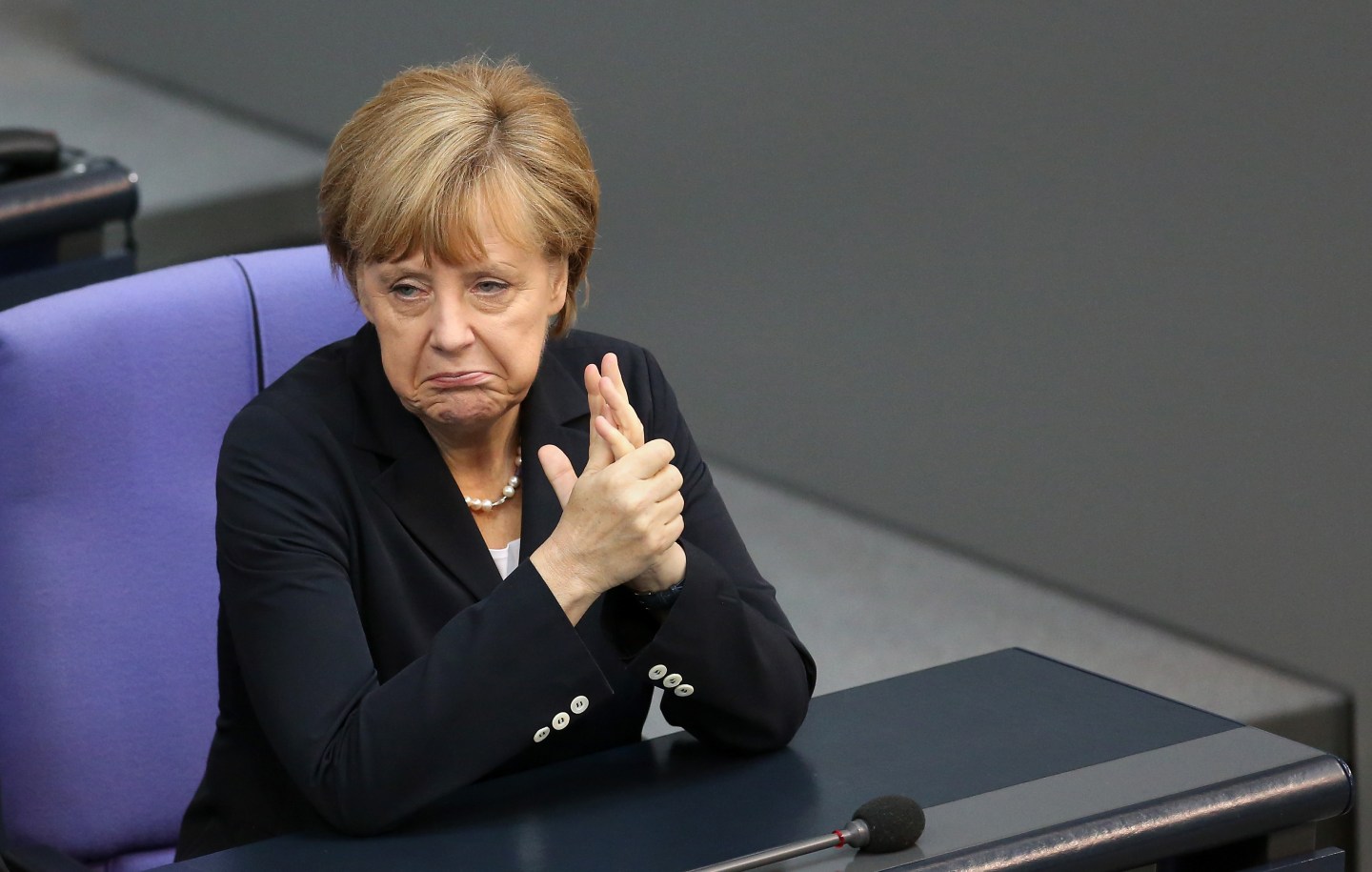 German Chancellor Angela Merkel recently announced that she will make changes to the broad refugee policy she adopted in August, which dramatically expanded the flow of Syrian refugees to Europe and resulted in Germany receiving 1 million migrants this year. Merkel drew – and deserved – widespread praise for the humanitarian spirit of her policy, but her plan produced five major problems, for herself, other European governments, and the asylum seekers. Germany and the European Union, as well as the prospects for genuine and sustained protection of Syrians, could benefit greatly from shifting to a different model of refugee protection.

The first and most obvious problem: The unexpectedly large flows of asylum seekers are imposing major costs on receiving communities. They also strain the sheer logistical capacity of Germany and other European states – despite impressive rallying of support from governments and many parts of civil society. Merkel’s own party had highlighted this concern in pressing her for changes.

Second, the policy has exacerbated divisions within the EU. Merkel did not consult widely before her August offer of refuge, which waived the usual Dublin treaty limitation that would send asylum seekers back to the first country through which they entered the continent. Coming from Europe’s economic powerhouse, the offer immediately attracted tens of thousands of additional asylum seekers, including a great many non-Syrians. It put them on the move through transit countries that were unwarned and ill-equipped to assume the logistical burdens. Not surprisingly, those governments resented the situation, and some, notably Hungary, responded with razor wire.

Third, without the Dublin limitation, the only apparent mechanism to discourage or restrain the flow is cruel and sometimes lethal – though this was not the conscious intention. One observer at a transit point near the Greece-Macedonian border innocently asked what should be an obvious question: : “Why do people have to walk 3,000 kilometers? Only the fittest and the strongest will make it.” Having to get to Germany on one’s own has meant that thousands entrusted their fates to smugglers, who often supplied flimsy dinghies or dangerous sealed trucks for the journey.

The fourth problem, security risks, became apparent in the aftermath of the terrorist murders in Paris. Some attackers appear to have come to France as part of the disorderly flow through Greece. Transit states have tried to do basic registration as migrants pass through, but the circumstances preclude effective security checks.

The fifth problem is perhaps the most alarming in the long run. Right-wing anti-immigrant parties have found a fear-mongering bonanza that has greatly enhanced their electoral chances. Besides the security angle, they can use those staggering scenes of trudging masses filling one lane of a superhighway or being herded in thick columns through pastures and cornfields as proof that ruling parties have lost control of borders. If humane leaders don’t get out in front of this soon, they may be replaced in several countries by hard-liners implementing rejectionist policies along the lines of Hungary’s.

The trick for Merkel is to pull back from the hastily imposed August policy in a way that reassures a restive citizenry, but keeps alive genuine protection opportunities. The vague changes sketched so far seem unlikely to match the challenge. A better alternative is available, but it requires an expansion of traditional European thinking.

To explore such an alternative, imagine what might have happened if Merkel’s advisors had given her some different options when she signaled in August that she wanted to rescue hundreds of thousands of Syrian refugees. The most logical step, one might have thought, would be to set up processing in the first-asylum countries hosting nearly 4 million Syrians – Turkey, Lebanon, and Jordan – and then move approved refugees to Germany or other participating states. German or EU officers could screen for security risks there, before relocation, rather than months later, after an asylum seeker was already resident in Europe. The flow could be better metered to match the pace of Germany’s domestic efforts to ramp up reception capacity. Persuading other states to join in to this kind of orderly and more secure resettlement process would probably find more success than the stalled plan to relocate 160,000 from among Germany’s current arrivals. And such a policy could have saved hundreds of lives, by providing safe air transport directly from the region to the destination country.

This is the quota resettlement or orderly departure model, which is most familiar from its dominant use by the U.S. and Canada. The German government apparently gave little thought to this in August, being afflicted with a kind of models myopia based on the long European tradition of employing an asylum model. A core feature of the latter is that it protects only people who reach the country of potential refuge on their own, and who then present their legal cases to adjudicating officers. But this is exactly that kind of unruly arrival process that has been the major source of the five problems listed above.

Germany – ideally all of Europe – should do all it can to shift to the quota resettlement model, moving Syrians directly from the first asylum countries in the region. That change must be bolstered by reliable international funding for the camps and settlements there, both to make the wait more tolerable for those in the processing queue, and to assure a livable option for those who, for whatever reason, will remain until resolution of the Syrian civil war.

One possible objection is this: that a quota resettlement program, even if desirable, would not do much to rein in the current unruly flow, in part because European law, as construed by the European Court of Human Rights, will not permit maritime interdiction or other blocking measures needed to discourage spontaneous asylum seekers. There is much to both parts of this objection. First, simply adding a new orderly channel for potential refuge will not by itself end the spontaneous flows, especially now that the routes are well-worn. Deliberate enforcement to curb those movements will be required (though of course asylum must remain an option for those who do arrive).

Decisions from the ECHR over the last few years, however, have taken a strikingly inflexible stand against maritime interdiction or other barriers to access by asylum seekers. The human rights logic of these rulings holds considerable appeal on first glance. But they have never been tested on anything like the current scale. Declaring absolute rights does not create guesthouses for shelter, nor provide food or jobs when a single country’s continental arrivals exceed a million in one year. At some point there are inescapable capacity limits. And if anti-immigrant parties come to power, there may be far wider damage to the overall human rights structure within Europe, including withdrawals from ECHR jurisdiction.

To the extent that those court decisions require essentially unlimited access to Europe for people who want to press protection claims, they are not realistic. But it is not beyond the realm of possibility that the Court, now chastened by the magnitude of the recent flow and cognizant of the risks exposed by the Paris attacks, might construe its earlier rulings to find room for carefully executed access restrictions. Such a change in jurisprudence is much more likely to come in the context of an orderly quota resettlement program, coupled with generous material support for the first-asylum camps in the region.

David A. Martin is the Warner-Booker Distinguished Professor of International Law at the University of Virginia. He has held several federal government posts having responsibilities for refugee programs, most recently as Deputy General Counsel of the Department of Homeland Security during the first two years of the Obama administration.