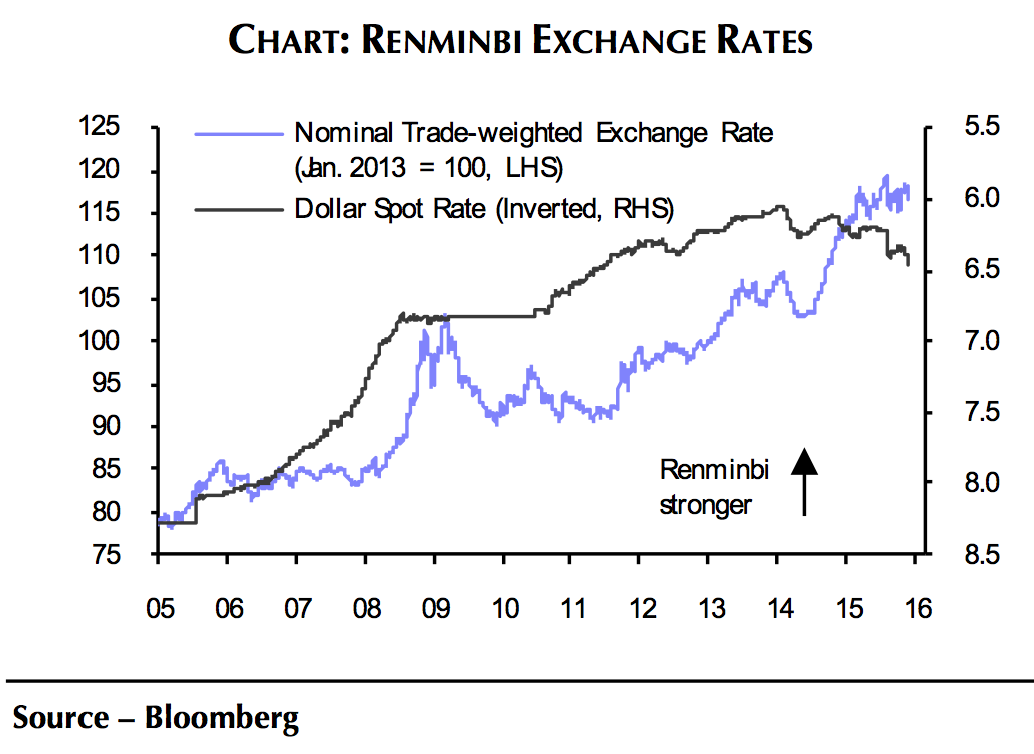 The currency may weaken against the dollar because China’s monetary policies are loosening while those in the U.S. are finally starting to tighten, possibly beginning with interest rate rises this week. The move is also real reform because the currency can’t liberalize until it loses the artificial peg to the U.S. dollar.

Right now, the last thing that Beijing needs is an automatic tightening of monetary policy through the exchange rate channel. Real interest rates are already cripplingly high because producer prices are falling at an annual rate of nearly 6%, while the People’s Bank of China’s official interest rates are still well over 4%.

Until now, casual watchers may not have noticed the dramatic climb the dollar has been on—and one the RMB has followed because of the peg. But the chart above, from Capital Economics, shows how the RMB, forced to rise lockstep with the skyrocketing U.S. dollar, has gotten much more expensive compared to its neighbors’ currencies.

That rising blue line starting in 2014 is the RMB getting much more expensive compared to the currencies of Asian neighbors and European partners. That declining black line is the RMB weakening against the U.S. dollar after ten years of gains.

Another chart from ANZ shows the same trend, just focused on the last two years.

Now you can begin to understand why China’s long-expected currency reform, at least a decade in the making, has recently been taking shape—first in August, when it loosened the peg to the dollar and the yuan fell by 3% over a couple days, and now in December, when that dollar peg is all but over.