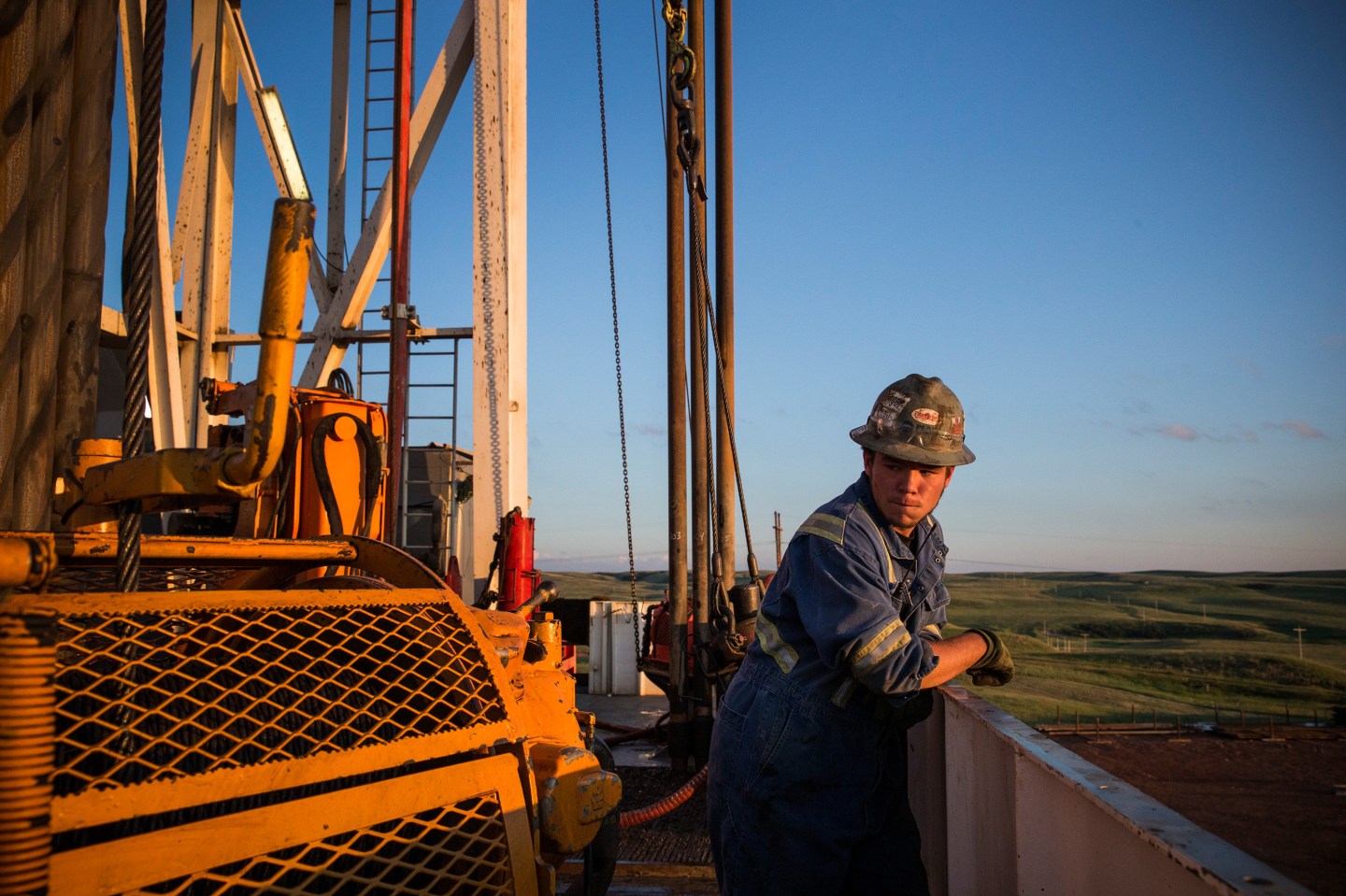 A big problem is growing in low-rated corporate debt.

The sell-off of high-yield debt, or junk bonds, got worse on Monday. Prices of so-called junk bonds fell as much as 1.5% by the middle of the day before rising a bit. That was after dropping 2% on Friday, the biggest daily fall since 2011. For the year, junk bonds are now down nearly 5%. The drop in high-yield prices is odd because most believe the economy is improving. The Federal Reserve is widely expected to raise interest rates on Wednesday for the first time in nine years.

But the sell-off in high-yield bonds could indicate that the economy is in worse shape than many people think. Indeed, on Monday, Goldman Sachs pointed out in a note that it’s rare for the high-yield bond market to have a negative return in a year in which we are not in or entering a recession. And this year would be the worst return for high-yield debt outside of a recession year.

Is the high-yield sell-off really a sign that we are headed for a recession?

Probably not. The biggest driver of the losses in the high-yield market are the bonds of oil companies. Energy sector junk bonds were down nearly 20% this year, according to Goldman. The major sector with the next largest drop was industrial, which was down less than 6%.

Put another way, high-yield energy bonds are trading with a yield that is on average 12 percentage points higher than Treasury bonds. That is much higher than average, suggesting investors believe there will be a high level of potential defaults. Outside of energy bonds, though, the average spread over Treasuries is around 5.5%, according to Martin Fridson, founder of Lehmann Livian Fridson Advisors and a longtime junk-bond analyst. That’s about average, Fridson says, suggesting that concerns about defaults outside of the energy sector aren’t running any higher than normally.

When did the sell-off of high-yield bonds began?

Even though everyone just started to notice, high yield bonds have been performing poorly for a while now. The high yield bond market actually peaked in mid-April. Back then the total value of the high-yield market was $1.41 trillion, according to data from Bank of America Merrill Lynch. As of the end of last week, the value of the high-yield debt market had fallen to about $1.23 trillion. Of course, much of that value has been lost in the past month.

What tipped off the latest sell-off of high yield bonds?

Fundamentals, in the form of the oil price, have been poor for most of the last year, but OPEC’s decision in early December to extend its price war on shale producers rammed crude prices down another 10%. That led within days to what’s known as a ‘liquidity event’, when a fund managed by Third Avenue, Focused Credit, announced it was blocking investors from getting their money out of the fund. Third Avenue said it could no longer meet the crush of redemption requests. The company said it was winding down the fund and could take at least a year to give investors back their money, or what was left of it. The fund was down nearly 30% for the year, as of mid-last week. It’s very usual for a mutual fund to be winding down. And on Monday, the Securities and Exchange Commission said it was closely monitoring the situation.

The reason this gets people so nervous is that individual investors have poured money in to the high-yield bond market in the past six years, as returns on lower-risk investments such as Treasury bonds withered under the pressure of the Fed’s quantitative easing program. There was around $100 billion in high-yield mutual funds in 2009, according to Morgan Stanley. That had grown to nearly around $400 billion last year. Before the recent sell-off there was about $380 billion in high-yield mutual funds. That’s primarily held by individual investors, who tend to be more skittish about avoiding losses.

How risky are high-yield mutual funds?

Not very, as a rule. Observers said the Third Avenue fund that ran into problems was very unusual. According to public filings, the fund had 58% of its assets in bonds that were rated CCC or lower, meaning the fund was taking unusual risk. According to Morgan Stanley, the top 10 high-yield hedge funds hold on average just 7.4% of their assets in bonds rated CCC or lower. What’s more, around 20% of the assets of the Third Avenue fund were in bonds that didn’t actively trade. And couldn’t be sold without taking big losses when investors wanted their money back.

And Third Avenue’s double-digit drop is usual as well. According to Morningstar, the average high-yield mutual fund is down around 4%. In fact, through Friday, there were only 7 out of the top 100 funds that were down 10% or more.

One of the concerns is that the reason high-yield bond prices are dropping so fast is that funds are having trouble selling them. So called bond market liquidity concerns have been rising in the past year. Regulations have forced the big Wall Street banks out of actively trading high-yield bonds, and that may make it harder for others to trade. Indeed, high-yield market observers said there appeared to be some selling problems on Monday. Art DeGaetano of Bramshill Investments, which has $250 million in assets, said it appeared hedge funds were shorting-or betting against the high yield ETFs-in order to hedge themselves, because they were having problems getting out of high-yield positions.

Fridson said he wasn’t as worried about liquidity. He said there was a high volume of buying and selling in the high-yield bond market. And Morgan Stanley in its Monday research note said that the high-yield market has gone through other periods in which withdrawals were high, and done fine. “The market isn’t closed but funds must be prepared to take a hit if they are going to sell,” says Fridson.

Is this a repeat of the financial crisis?

About a month ago, hedge fund Ellington Management, run by well known bond trader Michael Vranos, put out a report comparing the high-yield mortgage market to the subprime market, saying that we’re likely to see a repeat of 2008. Ellington said there was now more high-yield debt outstanding, at $1.2 trillion, than subprime mortgage bonds. “We believe it is now time to batten down the hatches,” wrote Ellington.

But unlike in 2008, banks are not large holders of high-yield debt. They do lend money to hedge funds that invest in debt. And credit hedge funds have grow considerably in the past few years. But Diedrich says those hedge funds generally deploy less leverage than they used to, in part because the banks have made it so expensive (new regulation has made them do so). What’s more, energy debt, the portion of the market that investors are most worried about, only makes up about 15% of the high-yield debt market, and only about half of that debt is considered stressed right now.

Morgan Stanley also wrote in their noted that there are far fewer derivatives tied to high-yield debt than there were to mortgages, which should limit losses if things truly go south. “We believe it is important to note that the systemic implications of the current environment are significantly more muted than in 2007/2008,” wrote Morgan Stanley’s credit analysts in their note.

Correction: An earlier version of this story misstated how much Bramshill Investments has invested in high-yield bonds. The firm has $250 million in assets under management.