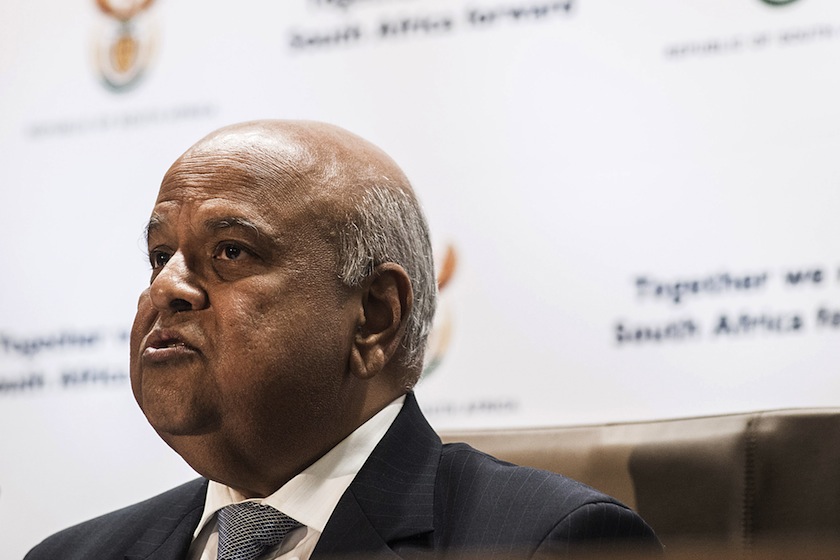 New Finance Minister Pravin Gordhan acted swiftly to calm South Africa investors on Monday, saying he would strive to keep Pretoria’s investment grade rating after days of market turmoil that have triggered calls for President Jacob Zuma to step down.

Zuma appointed the widely respected Gordhan late on Sunday, his second stint in the job, in a dramatic U-turn that gave Africa’s most industrialised economy its third finance minister in less than a week.

Fallout from the sacking last Wednesday of Nhlanhla Nene in favor of relatively unknown and untested David van Rooyen has also clouded the political reputation and future of Zuma, 73, within the his African National Congress party.

His initial appointment of van Rooyen, a Zuma loyalist in parliament, touched off a critical storm and selling frenzy in the rand currency, stock, and bond markets.

Seeking to reassure markets, Gordhan told a televised news conference on Monday: “We take account of the concerns of the rating agencies and investors, and we shall endeavor to protect the investment-grade rating of South Africa.”

By 1216 GMT on Monday, the rand had strengthened by 5.07% against the dollar to 15.0850, recouping some of last week’s losses and putting it on course towards its biggest daily percentage rise since 2008. The rand had traded at 14.4320 per dollar before Nene was fired.

South Africa is girding for local elections next year in which the ANC will face stiff competition from the opposition Democratic Alliance in urban areas, including the economic hub of Johannesburg. The countryside remains an ANC stronghold.

Even some supporters of the ANC, Nelson Mandela’s erstwhile liberation movement that has ruled since the end of apartheid in 1994, expressed dismay about Wednesday’s appointment of a Zuma loyalist to the crucial finance post.

They also described the return to the ministry of Gordhan, who also held the job from 2009 to 2014, as a sign Zuma that was losing his grip. “It may not be his death knell, but it’s certainly the turning of the tide,” said Ben Turok, a former senior ANC legislator and anti-apartheid activist.

But Reserve Bank Governor Lesetja Kganyago said there were no plans for a special session because South African capital markets were deep enough to withstand shocks of this magnitude.

Yields on government bonds recovered sharply in early trading on Monday, with the benchmark paper due in 2026 down 107 basis points at 9.31%.

The banking index shot up 13% in afternoon deals, erasing most of the losses sustained last week, and the broader market seesawed in and out of the red during the session.

“The markets will welcome back Gordhan to National Treasury. He is a known entity, is his own man, and did well when in the post previously,” Rand Merchant Bank currency strategist John Cairns said. “But it is certainly unreasonable to expect all of last week’s losses to be reversed–a huge amount of uncertainty has been created in the past few days.”

Gains in South African assets are expected to be short-lived with some analysts citing lasting damage to South Africa’s image as a stable emerging market and this week’s decision on U.S. interest rates, which are widely expected to be raised.

“Markets should rally back very strongly, but I would not expect a total retracement with a permanent loss of trust in leadership, even if we are in a better place,” said Peter Attard Montalto of Nomura in London.

Zuma has said his about-face on the Finance Ministry was prompted by many calls to rethink his decision.

Kokkie Kooyman, a fund manager at Sanlam Investment Management Global, said the president made it seem as though fiscal prudence was not a concern.

“Members of the cabinet may have managed to convince him to change his mind. However, a leopard doesn’t change its spots. We still have the same president. We will still have high unemployment and high debt. Rating agencies will not re-rate us upwards.”