Like It or Not, The FCC’s Net Neutrality Rules Are Here to Stay 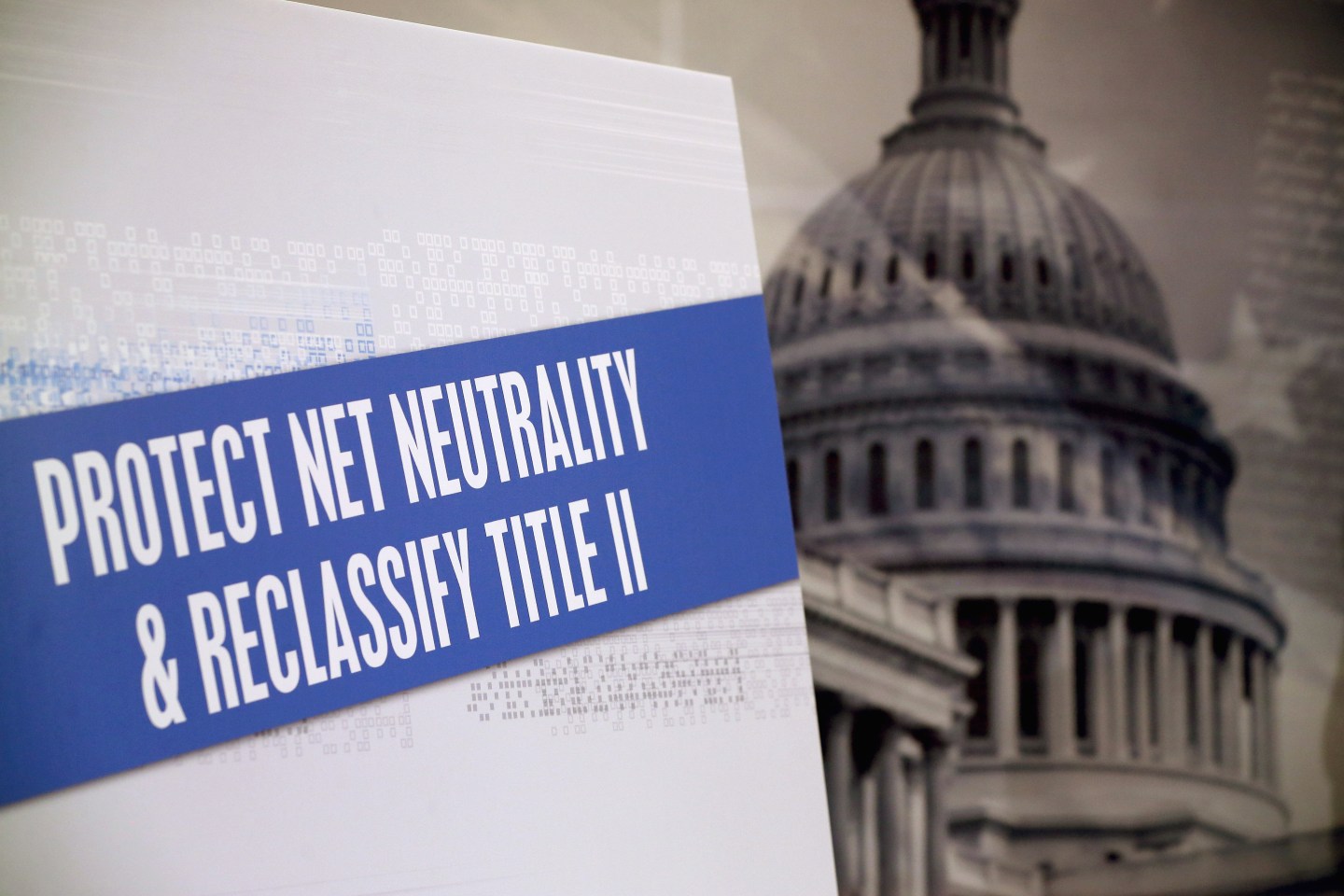 WASHINGTON, DC - FEBRUARY 04: A sign that reads "Protect Net Neutrality& Reclassify Title II is on display during a news conference on Capitol Hill, February 4. 2015 in Washington, DC. Senate Democrats are calling on the Federal Communications Commission to reclassify the transmission component of broadband Internet access as a telecommunications service under Title II of the Telecommunications Act. to prevent broadband providers from creating Internet fast lanes for those who can pay and enforce open internet protections. (Photo by Mark Wilson/Getty Images)
Photograph by Mark Wilson — Getty Images

As observers await the outcome of a federal appeals court’s challenge against the Federal Communications Commission’s net neutrality rules, it’s likely that the court will uphold the agency’s regulations preventing Internet providers from slowing down or blocking Web content that they do not like or charging Web sites a fee for reaching Internet users faster.

When the FCC last February passed these rules amid fierce opposition from telecom companies, the agency used a section of the Telecommunications Act called “Title II,” which gives the FCC very broad powers to regulate telecommunications. Because of the strong legal authority granted to the FCC under Title II, it is likely that the court will support the rules.

And if that happens, it’s a cause for celebration. The net neutrality rules correctly puts the interests of society as a whole above the interests of cable and telecom companies. Network neutrality has facilitated business innovation “at the edge of the Internet” without a need for approval from network operator(s) and without exorbitant payments to network operators. The decentralization of the Internet based on network neutrality fueled innovation and economic growth, resulting in big successes such as Google (GOOG) and Skype, as well as a myriad of smaller innovative companies.

Instead of network neutrality, telecom and cable companies want to give priority to information from companies that would pay them, keeping the rest of the information in the “slow lane.” Paid prioritization would create artificial scarcity — profitable to residential Internet Service Providers (ISPs) but detrimental to the public interest.

By manipulating the size of the paying firms’ lane, an ISP access provider can guarantee a difference in the arrival times of packets originating from paying and non-paying firms, even if the arrival time for paying firms’ packets is not improved over net neutrality. This would create a significant reduction of innovation at the edge of the network as new innovative firms with small capitalization will likely not be able to pay the fees of paid prioritization.

Typically, access to ISPs also provide their own content and applications, or, more generally, they provide substitutes to the content and applications of independent companies. For example, Netflix’s customers may use Comcast’s Internet to download video from Netflix (NFLX), while Comcast (CMCS-A) sells video services delivered through cable TV. Similarly, both telecom and cable ISPs provide their own phone services that are also provided by independent VOIP providers such as Vonage. Without network neutrality rules, ISPs may favor their own services and degrade transmission of rivals that use their pipes. This is likely to distort competition and reduce the social benefits of the Internet.

Finally, there are political opinions and news diversity concerns if content in newspapers and websites is delayed in comparison with sites and newspapers that pay for prioritization.

Network neutrality has contributed very significantly to the fast and vigorous growth of the high technology sector in the US while ensuring a level playing field in competition. Hopefully the rules will be upheld by the Court of Appeals.

Nicholas Economides is a professor of economics at the NYU Stern School of Business. Professor Economides testified before Congress on net neutrality earlier this fall.