Abe Looks to India for Growth (and Insurance Against China) 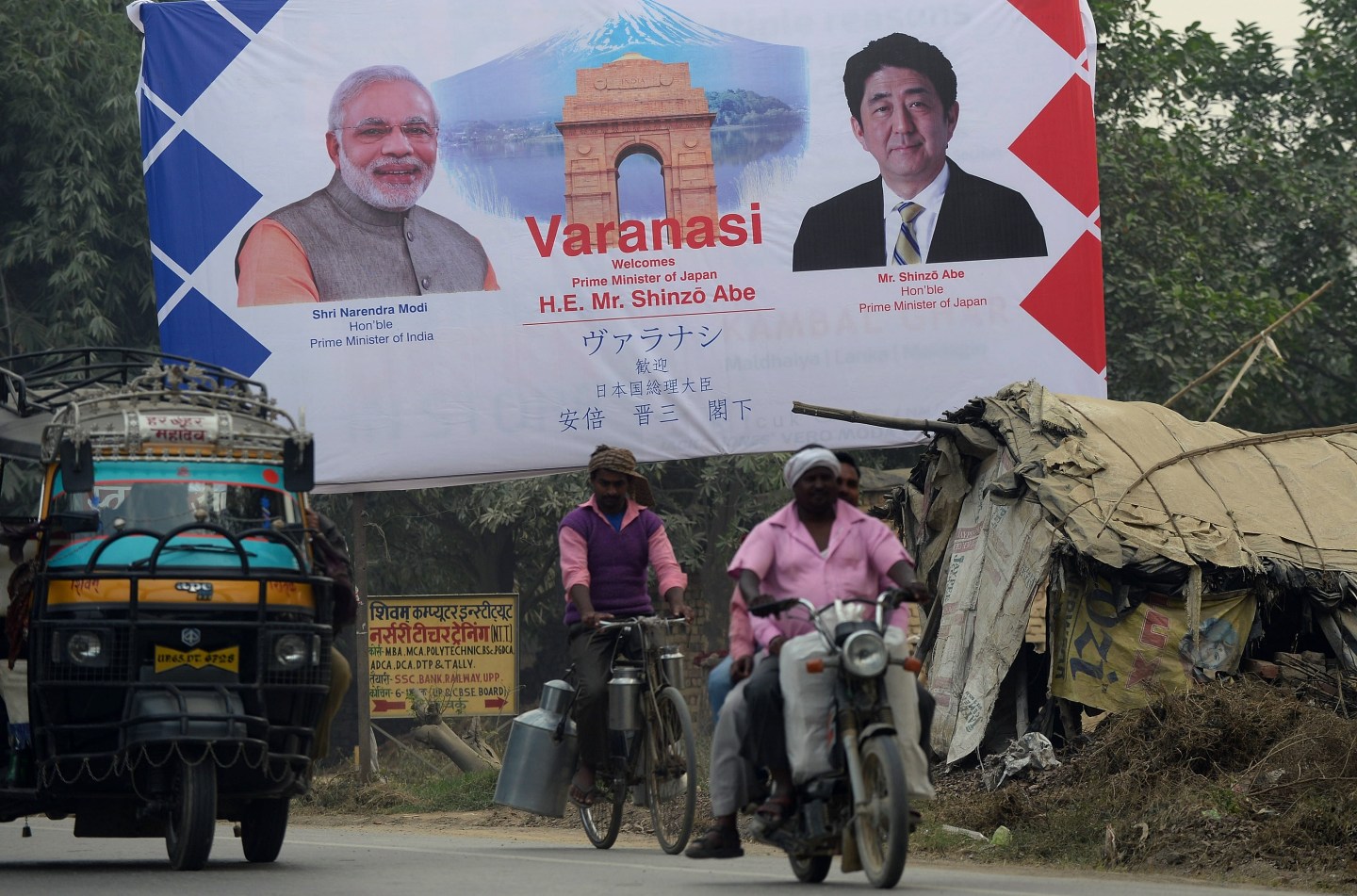 The visit promises to be a landmark in the development of ties between two of Asia’s biggest democracies which complement each other’s needs: Japan has a surplus of capital and a shortage of growth opportunities, while India has opportunities galore but desperately needs capital.

In economic terms, the high point of Abe’s visit is expected to be the confirmation of a $14.7 billion deal to roll out Japan’s bullet trains in India, in a much-needed modernization of the country’s creaking rail network (Japan will reportedly provide over half of the funding on concessional terms). A project to build a 300-mile high-speed rail link between Mumbai and Ahmedabad was approved in principle by Prime Minister Narendra Modi’s cabinet earlier this week.

Sealing such a big deal will be a welcome coup for Modi, aware that the success of his “Make in India” campaign to attract international manufacturers depends to a large extent on fixing the country’s chronic infrastructure issues. Another deal that may be signed is a $128 million one for sewage treatment plants in the holy Hindu city of Varanasi, according to Mail Online.

But much of the talk ahead of the visit has focused on security issues, with Abe making no secret of his efforts to find regional partners to counterbalance rising Chinese power. In an op-ed for the Times of India this week, he pushed the need for India and Japan to cooperate with the U.S..

“In order to maintain an open, free and peaceful sea, it becomes important more and more for there to be collaboration between Japan and India, as well as the international community including the U.S.,” Abe wrote, referencing the fact that Japan and India have now committed themselves to regular joint naval exercises.

Reuters reports that the two sides have also been negotiating a deal on the transfer of defense-related technology and other issues to boosting trade in defense goods.

“The security element is important, but secondary,” says Gareth Price, a senior research fellow with the London-based Royal Institute for International Affairs. “The main focus in India will always be on its domestic development.”

Security concerns, Price says, are less pressing for India than they are for Japan, which depends on its seaborne trade and is watching with concern as China presses its claims to disputed areas of the South China Sea ever more firmly.

Cooperation on defense and security may be a logical extension of a trade relationship worth $18 billion a year, but there are still some topics where progress is slower. Local media reports suggest there’s no chance yet of Japan agreeing this week to share its civil nuclear technology with India, due to proliferation concerns (India has not signed the Non-Proliferation Treaty). Japan’s unique sensitivity towards the issue of nuclear weapons–being the only country ever to have been on the receiving end of them–has kept that issue taboo, despite India’s pledge under a deal 10 years ago with the U.S. to separate its civil and military facilities and allow U.N. supervision of the former.