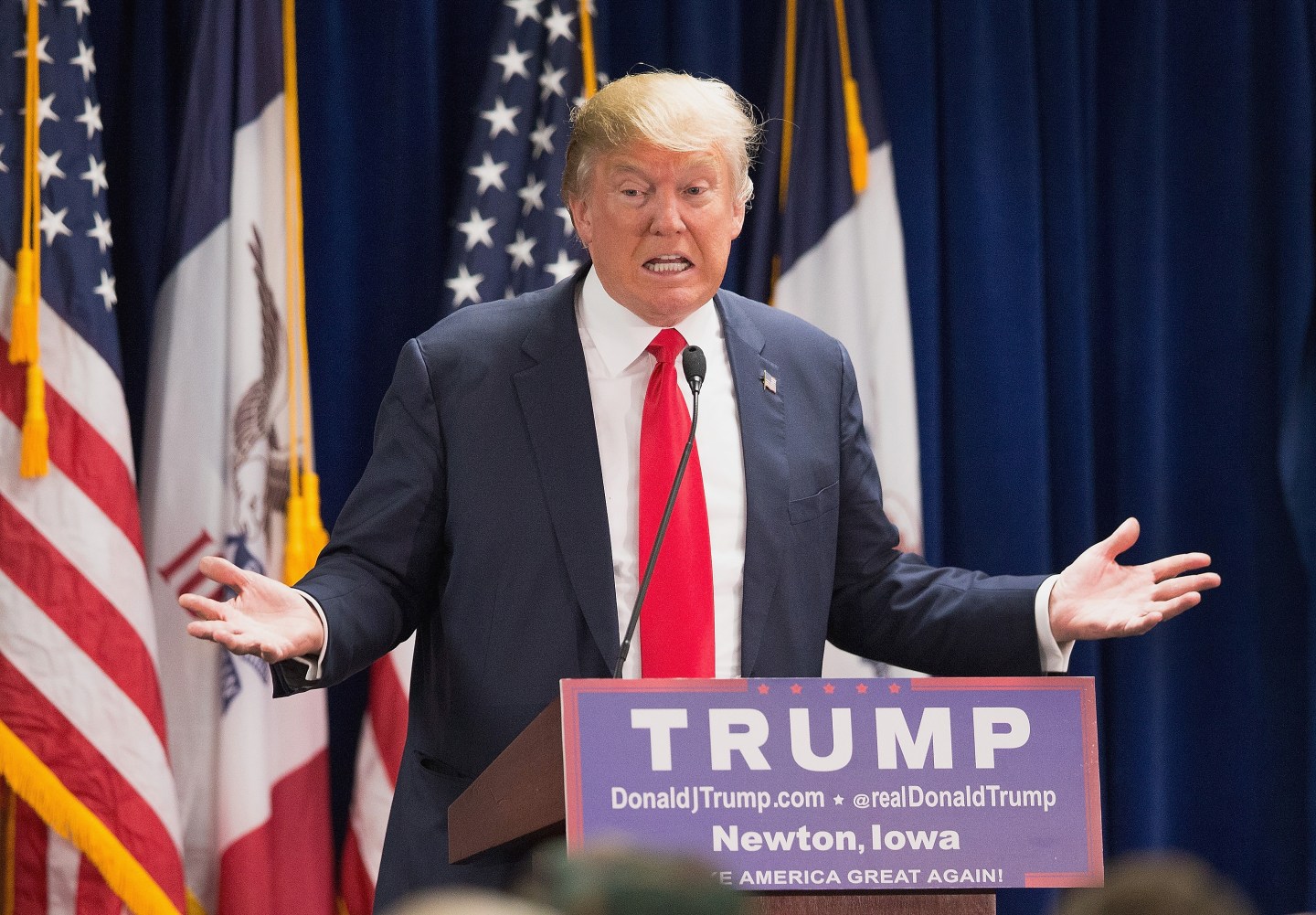 With 55 days until primary voting kicks off in Iowa, this is where we stand in the Republican presidential race: Donald Trump — who has held a commanding lead in national polls for nearly six months — just said he wants to block all Muslims from entering the country.

And he doesn’t just mean restricting those seeking to immigrate to the U.S., which in itself would impose a historically unprecedented religious test for the nation. Trump’s ban would extend at least to tourists as well, as his campaign manager affirmed.

Set aside the rank bigotry behind the proposal and think about the legal, strategic, and practical outrages it would generate. As former George W. Bush aide Ari Fleischer notes, among other things, it would mean that Jordan’s King Abdullah, a partner in the fight against ISIS, would be barred from visiting the U.S. to discuss the conflict. Would Muslim Americans vacationing abroad be allowed to return? What about Muslim American soldiers wrapping up deployments? How would they be sorted out? Trump so far hasn’t fleshed out these not-so-fine points, and many, many others.

Soon enough, polling will demonstrate whether Trump’s transparent (and immediately successful) bid to redirect drifting media attention back on himself will cost him voters. Recent experience suggests it will not.

Already, though, it points to a deeper problem for Republicans. The frontrunner is pouring lighter fluid on an explosive debate over safety, complicating prospects for whoever emerges as the GOP banner carrier.

The GOP hopes a renewed focus on the threat of international terrorism will give it an edge in the presidential race. The most recent CNN/ORC survey found 85% of voters identify the issue as either very or extremely important to their decision in the presidential election, at a time when their approval of President Obama’s handling of it has hit an all-time low. The CNN poll concluded before the San Bernardino massacre, which we now know to have been the work of an apparently self-radicalized couple swearing allegiance to ISIS.

This suggests that the GOP has an opportunity to offer an alternative vision for how it would confront a menace that’s now claimed American lives on American soil. Republican presidential contenders made use of this opening and lambasted President Obama’s primetime national address on Sunday as an ineffective, incoherent strategy for destroying ISIS.

But improving on the current strategy has so far proved easier said than done. In the wake of the San Bernardino attacks, Democrats have effectively cleaved the Republican field by pushing a plan to bar anyone on a no-fly list from buying a gun. Trump said he could support it (give him credit for that tiny bit of internal consistency), as did Ohio Gov. John Kasich and, in a more qualified way, New Jersey Gov. Chris Christie. But when Senate Democrats forced the issue to a vote last week, the four Senate Republicans running for president — Ted Cruz (Texas), Lindsey Graham (S.C.), Rand Paul (Ky.), and Marco Rubio (Fla.) — all opposed it.

The divide suggests that the party has hardly settled its internal fight pitting civil liberties against security concerns. In the early days of the presidential race, Rand Paul threatened to overturn foreign policy hawks’ long held dominance of the GOP by advocating a humbler American presence abroad and a renewed focus on protecting civil liberties at home. Drafting off revulsion at the scope of the Edward Snowden revelations, Paul pledged to restore respect for constitutionally protected privacy rights, which he accused the federal surveillance regime of trampling. But his campaign failed to gain traction, in part because of an outbreak of international turmoil — the rise of ISIS included — that suggested the U.S. couldn’t yet retreat within its borders or abandon its capabilities to smoke out a hidden global threat.

Under different circumstances, the GOP’s push and pull over the issue would represent a notionally reasonable, and perhaps even healthy, debate for a party trying to rediscover its center of gravity. But Trump’s maximalism destroys the exercise. By fanning fear with outright lies, he’s earned what looks to be a durable following among roughly a third of the Republican electorate. Even if he fades, the eventual nominee will have to figure out how to bring those voters back into the fold in a way that doesn’t destroy the party’s general election hopes.

Trump’s rivals seem to understand that his Monday statement crossed a different sort of line, based on the swiftness of the rebuke it earned from several of them. Former Florida Gov. Jeb Bush called Trump “unhinged;” Ohio Gov. John Kasich said his proposal offers “another reason why he is entirely unsuited” to lead the country; South Carolina Sen. Lindsey Graham said Trump’s comments are “downright dangerous” and called on the field to condemn them. But those disavowals can’t undo the damage Trump continues to wreak.