Saudi Arabia Hangs Tough on Oil in Fight for its Future 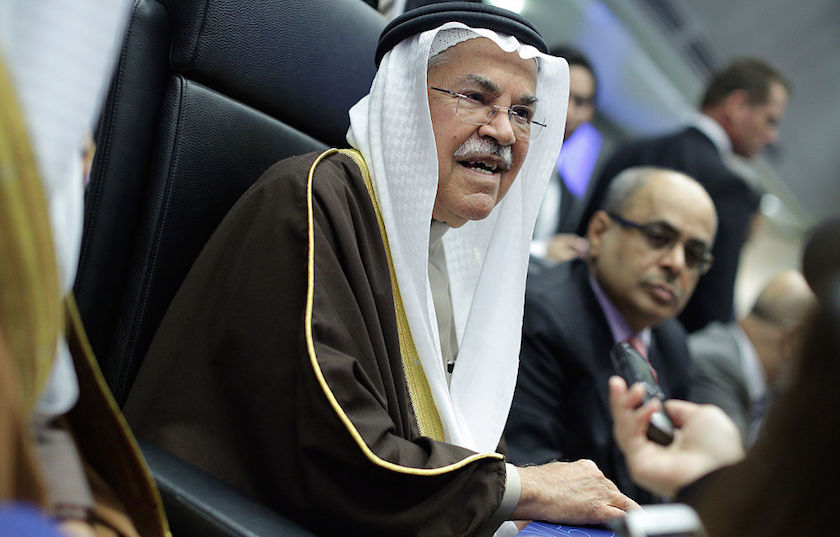 Saudi Arabia isn’t going to cut and run – at least not anytime soon.

The Kingdom has both the money and the patience to see the latest plunge in oil prices through to the bitter end, and it won’t be pressured by its “allies” in Opec or in the West to abandon its plans to reshape the oil markets. For the Saudis, this fight goes beyond price and is considered critical to securing oil’s future in the energy industry for decades to come.

Saudi Arabia’s decision on Friday to refrain from production cuts at the Opec summit in Vienna comes as oil prices hover near five-year lows, at around $40 a barrel. Oil is cheaper in real terms now than at just about any time in recent memory, as the supply on the market continues to vastly outstrip demand. Saudi hinted that it would consider cutting production (and letting prices rise) only if it secured commitments from Russia and the rest of its Opec allies that they would follow suit. Since none of the parties is willing to do that, Saudi is going to stay put.

To be sure, things could be a lot worse. Saudi still has 2.6 million barrels a day of spare oil production capacity at its fingertips. That’s more than twice the amount of oil it unleashed on the market last summer when it decided to deliberately crash the oil price. By holding those barrels back, Saudi is sending a message that while it wants to see oil prices weak, it isn’t suicidal, either.

Saudi Arabia stashed a great deal of cash away during the most recent oil boom and currently holds foreign reserves equal to its GDP—and that’s after accounting for the nearly $80 billion worth of reserves it spent this year propping up its currency and filling in budget holes. That number is equal to around 20% of the nation’s GDP, which means that even if the country froze spending, did nothing to boost revenue, and fought an all-out currency war, it could deal with oil prices in the $40 to $60 range for at least the next five years.

But this year was seen as particularly taxing to Saudi Arabia’s budget deficit, so subsequent budget shortfalls aren’t expected to be as shocking to the bottom line. Indeed, if oil prices averaged around $63 a barrel and the country took some menial steps to alleviate its budget gap, S&P estimates that the Saudi budget shortfall would shrink to around 5% of GDP by 2018.

Furthermore, it is important to note that the Kingdom is no stranger to budget deficits. While it has posted budget surpluses each year for the last 15 years starting in 1999, it also posted some nasty deficits every year from 1983 to 1998. During that time, the country fell back on the large amount of reserves it earned during the oil boom of the 1970s and early 1980s to make ends meet. The country was able to finance the first Gulf War (50% of its GDP in 1991) and still had plenty of money left over to fund massive infrastructure projects while keeping the royal family in designer clothes and Rolls-Royces.

So why are the Saudis willing to go through all this pain? They officially say it is about “protecting market share,” but U.S. oil producers believe the Kingdom is deliberately trying to destroy them. Shale oil drillers in the U.S. spend as much as 10 to 15 times more than what Saudi Arabia spends to extract a barrel of oil. With the great majority of the world’s new oil supply over the last five years coming from these high-cost shale fields in the U.S., it makes sense that Saudi Arabia would want to shut them down. By holding back production, the Kingdom was in effect financing the expansion of an inefficient competitor inside one of its biggest markets. The more the U.S. produced, the more the Kingdom had to cut to maintain prices.

Last summer, with U.S. production continuing to rise unabated, as oil demand growth in both China and the Western world fell, the Saudi government felt it had no choice but to act. Before it opened the flood gates, Saudi’s oil minister, Ali Al-Naimi, tried to get Opec and other large oil suppliers, namely Russia, to share the burden of making cuts to normalize supply and demand—but none was willing to budge.

“Despite our important position in the oil market and the clarity of our objectives, market fluctuations are inevitable,” Al-Naimi said in an April address on the state of his nation’s economy. “The challenge is to restore the supply-demand balance and reach price stability. This requires the cooperation of non-OPEC major producers, just as it did in the 1998-99 crisis.”

Al-Naimi was referring to the Asian economic crisis, when oil prices collapsed to around $10 a barrel. Oil prices may need to fall to that level in real terms before we see any cooperation again. The Saudis don’t want to drive oil prices down that low, but it can hang for much longer at those levels than Russia, Iran, and, certainly, U.S. shale producers.

This wasn’t the first time the Saudis dumped crude on the market to crash oil prices. It did the same thing in 1985, when high oil prices led to an explosion in oil production outside the Middle East, threatening the dominance of the Kingdom and the Opec cartel. The excess oil held prices down for more than a year, putting an end to the “Dallas” and “Dynasty” oil boom of the early 1980s.

The experience of the first half of the 1980s was still in our minds. At the time, we cut our production several times. Some OPEC countries followed our lead, and the aim was to reach a specific price that we thought was achievable. It didn’t work. In the end, we lost our customers and the price. The Kingdom’s production dwindled from over 10 MMBD in 1980 to less than 3 MMBD in 1985. The price fell from over $40 per barrel to less than $10. We are not willing to make the same mistake again. —Saudi oil minister, Ali Al-Naimi

But for Saudi Arabia, this goes way beyond simply taking out one of its competitors. It is about securing its future.

Despite years of trying to diversify its economy, Saudi Arabia is still a one-trick pony, with oil accounting for around 90% of export earnings, 80% of government revenues, and 40% of GDP. The vast majority of the country remains a lifeless desert where humans were really never meant to live. The Bedouins were nomadic for a reason; they needed to eat food and drink water.

So it is safe to say that without oil, much of Saudi Arabia’s population would probably flee for greener pastures. While the city of Jeddah, which is located on the Red Sea, as well as historical sites, like Mecca and Medina, would surely survive such an event, other cities, namely, Riyadh, the Saudi capital, which lies smack dab in the middle of the desert, would turn into ghost towns.

There is a persistent fear within the Palace that oil could someday be rendered obsolete. While the Kingdom could withstand a few years of low oil prices, it would be toast in a world where oil was worthless. But is that even possible? Sheikh Yamani, who was Saudi Arabia’s oil minister from 1962 to 1986, thinks so. He told the Telegraph in an interview back in 1999:

So is oil going to be obsolete in 15 years? Probably not, but the fear hangs over the Palace like a dark cloud. A decade of consistently high oil prices has affected the elasticity of oil in major consumer nations, like the U.S. Oil consumption growth started to level off in the last few years, as price-sensitive consumers conserved and sought alternatives. Much of these consumption changes were structural in nature, meaning that demand had been permanently destroyed.

This trend isn’t limited to the Western world. In China, diesel demand fell in 2013 and 2014, after rising at an average rate of around 8% annually in the previous decade, according to the International Energy Agency. The rise of cheaper alternative fuels, namely natural gas, was blamed for the decrease, causing the IEA to cut almost half a million barrels from its 2019 oil demand forecast for the country.

How long would it take for oil to become obsolete if solar powered cars become the norm or if natural gas prices continue to trade at a significant discount to its oil energy-equivalent? The Saudis don’t want to take the chance to find out.

The U.S. has long-been called the “Saudi Arabia of coal.” It has enough to power the country for decades, some even say centuries. But new technology, tougher environmental regulation, and cheap natural gas has made coal practically worthless. Now the U.S. is sitting on a bunch of rock. Saudi Arabia fears high prices will make oil just as useless, so it will do whatever it takes, sell it at whatever the price, to make oil competitive. If that means oil staying at $40 a barrel, so be it.