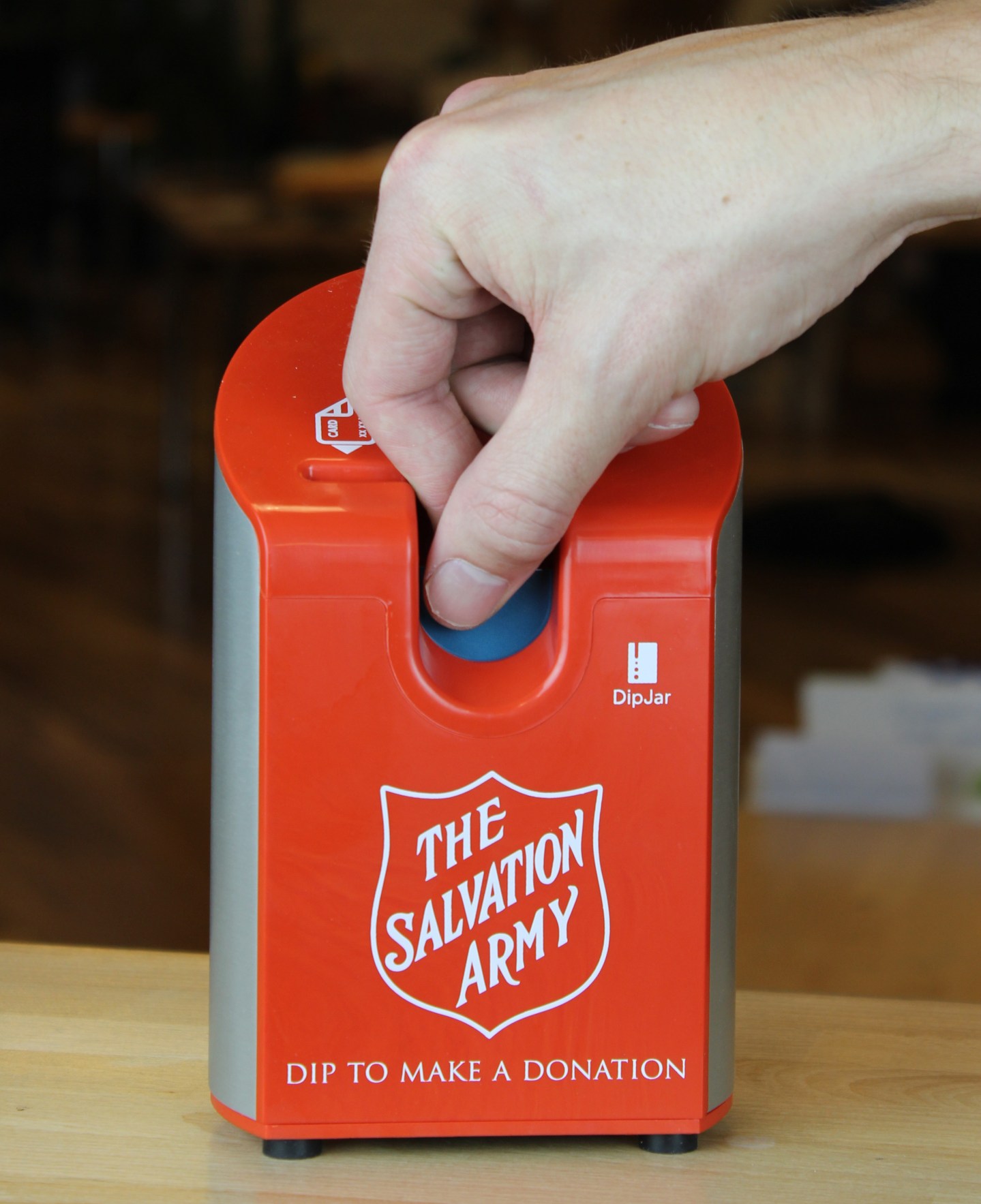 The sound of Salvation Army volunteers ringing bells is ubiquitous around the holidays. This year, many of those bells will have accompaniment: an electronic “ca-ching!” sound every time someone uses a credit card to make a donation at one of its famous red kettles.

For that, several of the Christian organization’s regional offices have tapped DipJar, a New York-based startup that makes credit-card enabled tip jars. The jars are programmed to accept a set dollar amount, so tippers simply dip their cards to donate. Similar to credit card transactions at retail chains, there is no receipt to sign.

DipJars will be available at 100 Salvation Army collection points this season, says DipJar CEO Ryder Kessler. It’s small percentage of Salvation Army’s thousands of donation spots, but Kessler says he expects the relationship to grow after this initial test run. “We see this as a way for them to recover the losses that occur when people stop using cash,” Kessler says.

Maria Todaro, Territorial Corporate Relations Manager for The Salvation Army USA Western Territory, said DipJar was a “fantastic alternative” for retailers that want to raise donations to the Salvation Army. She stressed that the organization’s red kettles are not changing.

Many news outlets have been clamoring about the end of cash for years. That hasn’t quite happened, but consumers are using credit cards and digital currency to pay for an increasingly large chunk of their purchases. For obvious reasons, two areas – tipping and spare change donations – haven’t made that shift.

DipJar is designed to fix that. Kessler came up with the idea four years ago after his regular barista told him her tips had gone down as more customers paid by cards. The company began operating seriously after going through the Bolt tech hardware accelerator program earlier this year. It relaunched over the summer, and is now used in 600 locations including coffee shops, sandwich shops, theaters that accept donations, and even a balloon artist.

Because the DipJar is also “smart,” or connected to the Internet, it can provide detailed data about how much people donate and when. It’s something that could benefit a large, sophisticated organization like the Salvation Army that gets a huge chunk of its revenue through donations.

For its services, DipJar charges a monthly subscription fee as well as a transaction fee, which Kessler would not disclose but says is lower than payment processing competitors like Stripe.

Kessler says many of its coffee shop clients chose DipJar over the built-in tipping option of a payment processor like Square, because they want tipping to be voluntary, not required. “DipJar is all about making service work visible and valorized and appreciated,” Kessler says. Thus, the “ca-ching!” sound each time someone leaves a tip. “People really want their generosity to be visible. It should be a social moment of shared appreciation,” he says.

Despite the popularity of digital payments services like Venmo and Apple Pay, Kessler believes credit cards aren’t going anywhere. But just in case, he’s including an NFC reader in the next version of DipJar so that people can tap their phones or smartwatches on ketttles to leave a tip. He’s even secured the trademark and social media handles for “TapJar.”

“We see ourselves as not existentially about credit cards,” he says.

This story has been corrected to note that the Salvation Army’s red kettles are not changing, and that DipJars are not designed to be a replacement for cash.

For more about the holidays, watch this Fortune video: