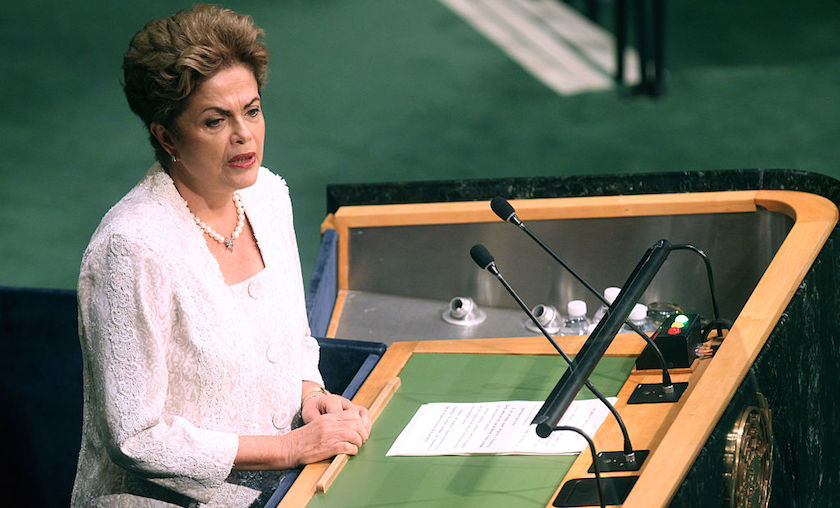 BRASILIA, Dec 4 (Reuters) – Brazil’s President Dilma Rousseff suffered two setbacks on Friday in her fight against impeachment, as a minister from her main coalition ally resigned and the Supreme Court quashed appeals from supporters seeking to stop the impeachment process.

The reversals do not rule out Rousseff’s chances of stopping impeachment proceedings, but they show the Supreme Court and even coalition partners are willing to let the process play out and even strategize for what may follow.

Aviation Minister Eliseu Padilha, an ally of Vice President Michel Temer and part of the fractious party that is Rousseff’s main coalition partner, submitted his resignation on Friday, according to two people familiar with the decision from within the Brazilian Democratic Movement Party, or PMDB.

Six PMDB ministers remain in Rousseff’s cabinet, including Health Minister Marcelo Castro, who said his center-right party would back the president on the lower house committee that will rule whether there are grounds to proceed with her impeachment. That could change if Padilha’s departure sets off a PMDB exodus from the Rousseff administration.

Meanwhile, Brazil’s Supreme Court turned back appeals from Rousseff’s allies to block the impeachment proceedings, including one filed by congressmen from her Workers’ Party.

The impeachment process was launched this week against Rousseff by opposition politicians for accounting moves that a congressional auditor said broke public finance laws.

Political wrangling over impeachment is likely to drag on for at least six months at a time when the government faces legislative gridlock, the deepest recession in three decades and an historic corruption scandal.

Rousseff has denied any wrong-doing. In a speech on Friday in Brasília, the capital, she said that the impeachment effort “has no basis” and that she would use all legal means available to combat it.

The aviation ministry declined comment on Padilha’s exit and Rousseff’s office had no immediate reaction to the resignation.

But politicians and analysts saw a deliberate desire by the PMDB, a restive ally even at the best of times, to put further distance between itself and the leftist president, and prepare the ground for the vice president to lead the nation if Rousseff is forced to leave office.

Even before the impeachment proceedings began, many within the party argued that the PMDB should be positioning itself to assume the government, with Temer at the helm.

Padilha’s departure “is a clear indication that Rousseff will fight this battle alone,” said Gabriel Petrus, a political analyst at Barral M Jorge, a consultancy in Brasilia. “It is also a good indication of the real interest that Temer has in this process: standing as Rousseff’s successor.”

Temer, for his part, has been lying low since the proceedings began. In a brief comment published in the Folha de S. Paulo newspaper on Friday, he said he hoped the proceedings would “pacify” Brazil’s bitter political landscape.

Though the impeachment drive may not succeed, it adds another obstacle for the government as it tries to win congressional support for policies to rebalance public finances and restore economic growth.

This week, data showed Brazil’s economy contracted in the third quarter by 4.5 percent from a year earlier. The country’s economic and political woes have been exacerbated by a kickback scandal at state-owned companies that has ensnared dozens of political and corporate leaders.

Rousseff is expected to narrowly survive the impeachment proceedings because her party and allies, for now, appear to control enough seats to defeat those who support the process.

The government estimated conservatively that it already had firm support from 140 lawmakers in the lower house – shy of the 172 votes needed to block the process – and was seeking more, an aide to Rousseff said.

Newspaper O Globo, based on estimates from party leaders, said on Friday Rousseff could have up to 258 lawmakers in her favor if the vote were held today.

Rousseff wants to speed up a vote on impeachment in the lower house, according to her chief of staff, who favors calling Congress back in the summer recess in January to hold a vote.

An early vote – before Brazilians get back from their summer holiday – would favor Rousseff since the pro-impeachment campaign is expected to gather support on the streets only once Carnival is over in February.