Kirby Smart: A Football Coach’s Journey in His Own Words 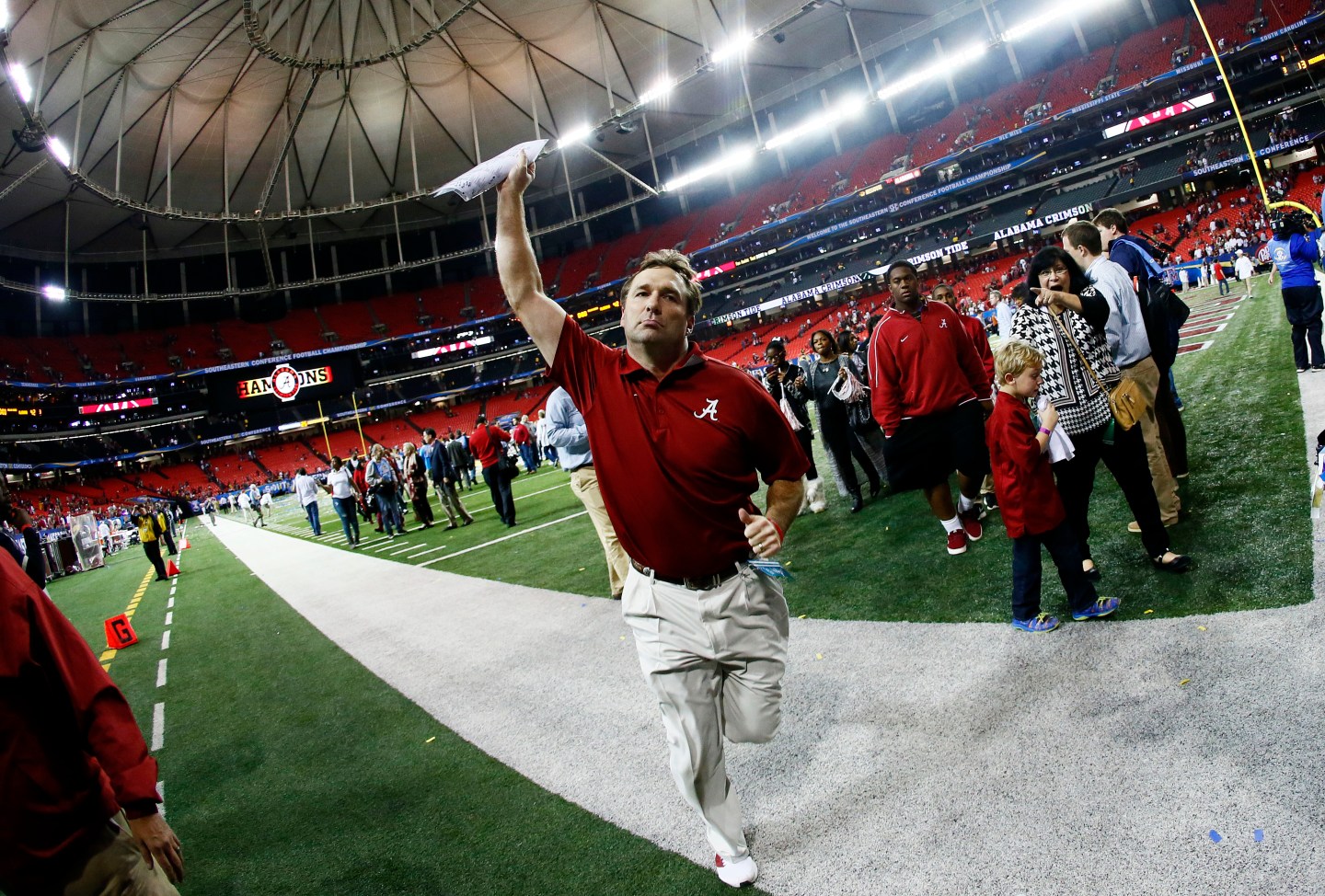 It appears that Nick Saban’s famed “process” at Alabama has produced another head football coach in the SEC.

University of Alabama defensive coordinator Kirby Smart is expected to be announced as the new coach at the University of Georgia as soon as this weekend, according to reports from the Atlanta Journal-Constitution and ESPN. Smart will replace Mark Richt, who was forced out this week after 15 years at Georgia.

A former defensive back at Georgia, Smart will be running one of the premier programs in the big-money Southeastern conference. The school’s most recent budget for football was $23.4 million, up from $17.3 million the year before.

Smart, who leads one of the top-ranked defenses in the country, is the latest Saban disciple to land a top job in the SEC, and the news comes on the eve of Alabama’s matchup with Florida in the SEC championship game on Saturday. Florida is led by first-year coach Jim McElwain, who served as offensive coordinator at Alabama under Saban from 2008 to 2011. McElwain was hired by the Gators to replace Will Muschamp, himself a former Saban assistant at LSU.

Saban has won three BCS National Championships seasons since taking over at Alabama in 2007—and previously won another title at LSU—by employing a detail-oriented management style that obsesses on execution. In Tuscaloosa, it’s known as the “process.”

I wrote about Saban’s well-honed approach in a 2012 profile for Fortune (“Leadership Lessons From Alabama Coach Nick Saban”) after the coach had won his second championship at Alabama, and just before he won his third. Today Saban is one of the highest paid coaches in sports, earning about $7 million annually.

As part of the reporting for the story, I had a chance to sit down with Smart, who’s coached at Alabama for nine seasons. Smart began by telling me about his coaching journey and how he ended up working with Saban. His experience illustrates that, just as in the business world, in big-time football it’s important to find a mentor and to build your network. Here, an edited excerpt from that interview:

Fortune: How did you meet Coach Saban and end up working with him?

Kirby Smart: I played safety at Georgia, went to the Indianapolis Colts, very brief stay with the Colts, got released. So when I got released I went back to Georgia. I got on at Valdosta State with [Will] Muschamp. So, Muschamp’s the defensive coordinator at a small school in Division II ball, and I’m the secondary coach, fresh out of college, basically 23 years old, maybe 24 at the time. And Will goes one year, and of course Will had [been a graduate assistant coach] at Auburn with [current Florida State head coach] Jimbo Fisher, so they called from LSU wanting a young linebackers coach. And Nick’s wanting one that he can kind of groom, so he hires Will. I stay at Valdosta State the second year, and I get Will’s defensive coordinator’s job. So I’ve got a connection now to Nick through Will. Will and I played at Georgia together and he was at Valdosta State with me, so I had one link there.

Then I go to FSU to be a GA under Bobby Bowden, (longtime FSU defensive coordinator) Mickey Andrews, and (then FSU assistant and current LSU defensive coordinator) Kevin Steele. Kevin Steele knew Nick. So I worked two years at FSU and a job comes open at LSU. Will wants to hire me, but Will has to make it Nick’s idea. So I was very patient, waited a long time. Met him for the first time ever at the Senior Bowl in Mobile. I drove over from Tallahassee and met with him there. He said, “I like you. Let me see what happens.” They’d just won the national title, so I’m thinking they can go hire anybody they want for the secondary job. But he had had some turnover in the secondary, because he coaches secondary, so guys come in and they don’t like it, they leave, they come, they don’t like it, they leave. Finally he said, “I’m tired of this.” So he said, “I want to hire somebody who will stick and stay, and put up with me and do all that.” And shoot, I jumped all over it.

Fortune: Saban put it to you that way?

KS: No, he didn’t put it to me that way, but I think that’s what Jimmy [Sexton], his agent, said. He said, “Look, Kirby, here’s the deal. He’s been through three secondary coaches in three years. He’s tired of having to retrain, retrain, retrain. He wants to hire somebody young, aggressive,” like Will was. By this time, Will had been there three years, so Will was the coordinator. He had kind of grown up in the system. And he said, “I’m going to try to get you hired.” And then Steele was pushing from the State end, Will was pushing from the LSU end, and kind of got me in with Coach Saban. So I got that job, and that was the first year with him. And that’s kind of how I linked with him. He also has a lake house in Georgia, where my dad was the head high school coach. So he’s at Lake Burton, which is in Rabun County. My dad was the head coach at Rabun County, so in the interview [Saban] was like, “Oh, your dad’s the head coach up there. That’s where my lake house is.” So there was a connection there, and it just ended up working out real well.

Fortune: What was the football part of the interview like?

KS: It was very intimidating because at the time I was green and young. I’d only coached four years, and I knew what I knew, which I knew I knew well, but I didn’t know a lot, not near what he had done defensively. So the interview for him was really simple. He was about the presentation. That’s what Will kept telling me. He said, “You’ve got to present well. Be a good teacher. Be confident. But it’s not going to be about what you know, because we’re going to do what we do.” And he was in the staff meeting. We interviewed for the whole offensive staff. Jimbo Fisher was there. [Former Tennessee head coach and current Dallas Cowboys assistant) Derek Dooley’s there. I mean, everybody’s in there. So they interviewed me, and that was pretty intimidating, coming from being a GA, graduate assistant. But I did well enough to get the job. And he called me in and said, “Look, I want you to be a young, aggressive recruiter. I want you to learn under me, train under me, and develop, and hopefully you can replace Will one day if he leaves.” And that’s kind of what ended up happening. So it ended up being a good deal.

Fortune: So he was kind of looking down the road.

KS: That’s right. He’s always looking ahead to groom the next guy. He wants to hire guys that can develop within the organization, which is the whole [Bill] Belichick thing: I’m going to bring guys up so that they develop. When they leave, I can replace them with good people. And that’s kind of what his plan was.

Now, it only lasted one year. He goes to the Miami Dolphins, and he offered me an off-the-field quality control position. I’d just gotten on the field and was hungry to stay on the field, so I actually went to Georgia. Mark Richt hired me. So Nick goes to Miami. I go to Georgia. Will goes to Miami with him. Will leaves after one year. [Saban] calls me back again and says, “I want you to take Will’s spot. Will just left.” So I go to Miami his second year there.

Fortune: He left the Dolphins after that year. Were you surprised that he decided to switch gears and come back to college again?

Fortune: You were only down in Miami the one year.

KS: I was down there the one year, but I knew he wasn’t as happy as he was at LSU. He kind of had groomed the LSU thing to right where he had a great staff. He had guys he really liked: Dooley, Jimbo, Will, Stacey Searles. He had a great staff. He’d kind of had a machine going because he had kids coming in, good players every year. He was going to compete for it every year. There’s not so many things you can control in the NFL, and that’s the frustrating part. You can’t really out-work people, which is his MO: I’m going to outwork you. I’m going to out-recruit you. I’m going to out-coach you. I’m going to do all that. There, there’s limitations. It’s all structured. You’ve got a salary cap. Everybody’s just almost equal. And so much of your control goes to either management or the draft, and sometimes you can’t dictate it.

I felt like he wasn’t that happy. He came in and talked to me, and said, “If I do this thing in Alabama, are you interested?” Well, of course I was because I think I’m a college coach. That’s where more of my connections are. I didn’t play in the NFL long. So it was great to get the experience, but I knew if he went, I’m following him. I’m tagging—I’m putting my caboose on his train because I want to attach it to him, not the NFL, where I don’t know anybody. I knew when he left I would come with him, wherever it was.