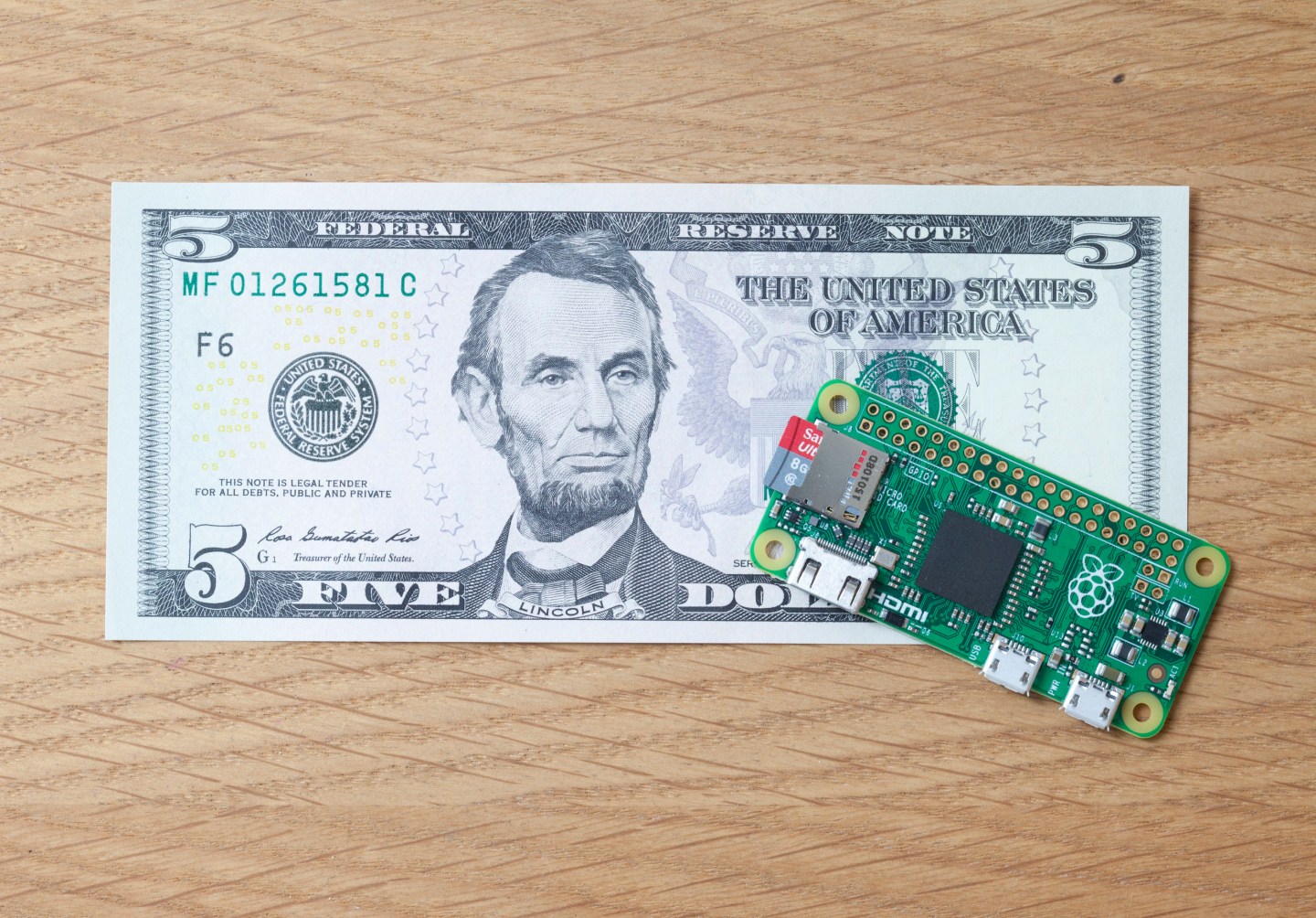 Over the holiday weekend the folks at the Raspberry Pi Foundation released a $5 version of their iconic Linux computer. This version, called the Pi Zero, isn’t quite a full-fledged computer (it doesn’t have a network and relies on an SD card for any storage). But it’s close enough, and was sold out on the day it was released. On Monday, the rest of the world can also buy a $9 computer called Chip that was sold earlier this year on Kickstarter.

While the specifications for each device are important for those building with them, the creation of two new, cheap, low-powered computers is far bigger than the community of makers and hobbyists that will snap up these boards. The Chip computer from the Next Thing Co. sold $2 million worth of its computers to hobbyists during its Kickstarter campaign. And the non-profit Raspberry Pi Foundation, which makes the Pi, estimates that it had manufactured 20,000 Pi Zeros and will continue making about 10,000 a week, according to Eben Upton the creator of the Pi.

There is plenty of demand for cheap computing. And it’s not for running spreadsheets. The powerful thing happening here is that these devices put cheap computing into the hands of the masses who can then play with their ideas and possibly turn them into new products. So far, the larger versions of the Raspberry Pis have been turned into everything from a supercomputer to a lemur-feeding device for animal research.

Upton created the Pi because he saw fewer university students coming into his computer science classes with the ability to code. He realized that the closed-off nature of computing systems and gaming consoles had led to a generation of kids who like computers but had no idea how to program them. In earlier days, kids grew up with machines like the Commodore 64, a box that required you to learn to code if you wanted to do much with it. His goal was simply to create a computer that required kids to program.

But the Pi, much like open-source software or the launch of Amazon Web Services, changed the economics of building software companies, has kicked off a movement of building new devices at a lower cost. The fruits of that can be seen on Kickstarter and Indiegogo today, and even cheaper devices such as the Chip and the Zero will only mean more products hitting the market. What’s intriguing to me is that these devices are not alone.

Two other advances in hardware are set to open up innovations in enterprise and scientific computing in ways that venture capitalists are currently eyeing as a potential investment opportunity. The first is coming quickly, and will be seen starting as early as next year when Amazon launches its mammoth X1 instance with 2 terabytes of memory. “We’ve not really had access to this in the end user and open source hacker community, and it changes a lot of assumption about how we write software,” says Adrian Cockcroft, a technology fellow at Battery Ventures. He calls these terascale systems.

Not only is Amazon providing access to more than a terabyte of memory for just a few dollars an hour, but big corporate customers are able to buy physical boxes that provide relatively low-cost access to terabytes of non-volatile memory that developers can use instead of storage. Access to more memory means that programmers will be able to write different types of software. Today companies such as SAP and MemSQL are exploiting that with in-memory databases that use the vast stores of memory close to the compute to rapidly process data, but there could be other use cases as well.

However, to get to those, we have to rethink the way we write software, says Cockcroft. For many common programming languages such as Java, having such a large access to memory would be untenable because it the language would never end up clearing out the unused bits of code, leaving a cluttered mess behind the developer.

Cockcroft compares it to trying to cook in a kitchen and never cleaning up after yourself. After a time, you’d run out of workspace. Normally many of the object-oriented programming languages clean up for you because they notice when you are running low on memory and haven’t used a bit of code in a while, but in the case of these terascale systems, it would be like having a kitchen the size of a football field, so by the time you ran out of room, it would take weeks to clean it up. So there is an opportunity for new types of software similar to what was needed for when the industry transitioned to using multicore processors such as GPUs. Plus, there is another era of innovative ideas expected from developers who can now experiment with these new terascale apps. Let’s call it the tera era.

The second low-cost shift coming to the open-source and hacking world is a slower evolution in computing, but will be no less powerful—the democratization of programmable chips like those made by Xilinx and Altera. The chips, known as field programmable gate arrays or FPGAs, are customizable hardware that can be programmed once manufactured to reallocate memory or change the rate at which a chip communicates with the network. In general such customized chips were used in high-end use cases, such as telecommunications networks or running powerful algorithms for corporations.

But as software to run these chips becomes easier to program thanks to startups such as BitFusion and the chips themselves require less of a performance hit thanks to companies such as Flex Logic (which recently raised $7.8 million from Eclipse Ventures), more people can afford to use them. For example, there are startups such as Numato, which built a video display board for the hobbyist community replacing what would normally be an ARM-based chip with an FPGA.

While the Opsis board isn’t a mainstream device by any stretch, the fact that it’s creator was able to build a niche device and sell it on a crowdfunding site using what is essentially a custom chip is a powerful testament to how the democratization of FPGAs could change things. There’s another project called the snickerdoodle, which was funded in November, that is basically a Xilinx FPGA version of a Raspberry Pi. Video processing, machine learning algorithms, and networking are all places where big companies use FPGAs to their advantage, but what happens if smaller hobbyists start taking that kind of customizable processing power into their garages?

We’re about to find out.

Just like we’re about to learn what happens when you price low-end Linux computers at less than a movie ticket, and what happens when you give millions of developers access to a few terabytes of memory. Innovation is coming at companies faster than ever, and it can be hard to see since it’s impossible to tell if the next genetic breakthrough is currently running on an X1 instance in Amazon or the brains behind tomorrow’s artificial intelligence is being developed quite literally on a chip in some kid’s basement.

For more on innovation, watch this Fortune video about Lockheed Martin: