The Stars Are Aligned for a Climate Deal, But What Kind Will It Be? 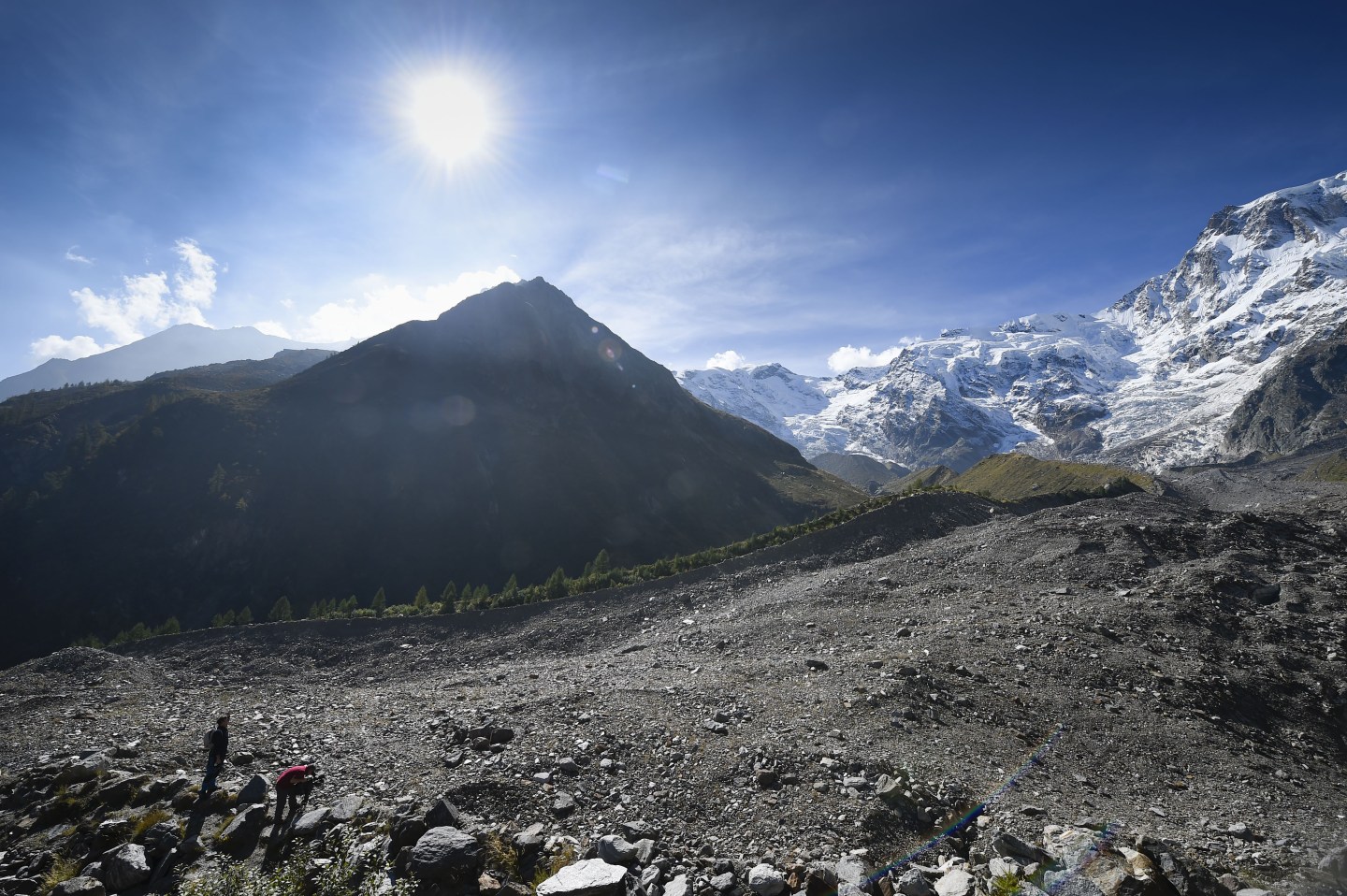 A cameraman works on the Belvedere Glacier on September 26, 2015 on the Monte Rosa. The Belvedere Glacier is a valley glacier, mostly covered by rocks, located above Macugnaga in the region of Piedmont. The glacier lies at the base of the east face of Monte Rosa and reaches a height of about 1.800 meters above sea level at its lowest point, and lost 3,1 m of thickness of ice in the last 6 month at its lower point. AFP PHOTO / OLIVIER MORIN (Photo credit should read OLIVIER MORIN/AFP/Getty Images)
Photograph by Olivier Morin — AFP/Getty Images

Pope Francis is a big supporter, and so is Chinese President Xi Jinping. No wonder, then, that climate experts sense an almost unstoppable momentum for a global deal to rein in greenhouse gases.

In the run-up to the 11-day U.N. conference on climate change in Paris, which kicks off Monday, almost every country in the world has pledged to limit its carbon emissions in the future—all part of a global effort to limit the rise in global temperatures to under 2 degrees Celsius.

“I’ve never seen the stars so in alignment going into a meeting as much as this one,” said Alden Meyer, policy and strategy director at the Union of Concerned Scientists in Washington, said on a conference call on Wednesday.

“It would take a real shift in political dynamics to not come out of Paris with an agreement,” he says.

The question is: what kind of agreement? One of the biggest disputes is over whether the Paris agreement will even be enforceable; Secretary of State John Kerry said earlier this month he did not see the deal as legally binding, drawing a fierce response from the French hosts. The U.S. is unwilling to let itself be bound to cut emissions without similar commitments from China and India, whose emissions are still rising rapidly. Both of the rising giants have pledged big increases in the use of sustainable energy sources, but China expects its emissions to peak only in 2030, and India hasn’t committed to any overall cut.

President Obama arrives in Paris on Sunday night—one of the 140 or so heads of state due in Paris—with a pledge to cut U.S. greenhouse gas emissions by between 26%-28% from a 2005 baseline by 2025. But his ability to clinch a deal may be hampered by Congress’s refusal to co-finance a UN Climate Fund that poor countries say they need to help them transition to a low-carbon future.

Other bitterly divisive issues remain–perhaps none more contentious than the hundreds of billions of dollars governments give every year to oil, gas and coal producers, whose output is ultimately responsible for much of the world’s carbon problem. This one is so contentious, in fact, that the U.N.’s technocrats removed the issue from the draft deal earlier this year, leaving delegates in Paris to fight over it in their talks over the next two weeks. Although there will be no vote on it, many expect subsidies to become a flash point for debate over how to pay for a drastic transition to renewable energies.

In recent months, almost every government has committed itself to vastly expanding renewable energy use. The International Energy Agency estimates the subsidies in place for renewable energy sources such as hydro, wind and solar, at $135 billion in 2014, (triple the 2008 level). While that seems like a big number, it’s a fraction of government help to fossil-fuel companies.

Although there is a wide range of estimates about how much governments help those companies, the figures are dizzying, ranging from the IEA’s $490 billion, to a giant estimate of about $5.3 trillion—about 6% of global GDP. That head-spinning number comes not from environmental activists, but from the International Monetary Fund, which includes in its estimate the intangible costs of air pollution and traffic congestion, all of which–it says–imposes real economic costs.

In the U.S., tax breaks for oil and gas companies have increased steadily since 2009, according to a report this month from the Overseas Development Institute, a London-based think-tank which examined the budgets of each country of the G20, the world’s largest industrialized and emerging economies. ODI says Washington and individual U.S. states give American oil, gas and coal companies about $20.1 billion a year in various subsidies (Texas and Arkansas each gives the sector about $1 billion a year). That’s second only to China.

The tax breaks come in various forms. Under a structure known as “Master Limited Partnerships,” U.S. energy companies are exempt from paying corporate taxes upfront, resulting in tax savings of about $3.9 billion in 2013, according to ODI. The industry saved another $2.6 billion from “intangible drilling costs” like wages and land surveying—all tax exempt. And ODI estimates that most of the $20.8 billion fine against BP, for the 2010 Deepwater Horizon oil spill in the Gulf of Mexico, is exempt from taxes, too. “One of the factors that sets the U.S. apart from other G20 countries is the sheer variety of tax loopholes for fossil fuel producers,” the ODI report says.

Officially, the G20–including the U.S.–has vowed to end subsidies, reaffirming that policy at every annual summit since 2009. But following through has been harder.

Of course, energy subsidies don’t arise in a vacuum. For the U.S., encouraging domestic oil and gas production has been driven by the need to reduce dependence on an unstable Middle East, as well as to stay competitive with Asian economies. The U.K., meanwhile, recently introduced new tax breaks for its North Sea oil industry last spring, worth about $2.7 billion, to stop the hemorrhaging of thousands of (largely high-skilled) jobs in Scotland. Drillers don’t retrain as solar panel designers overnight.

In poorer countries, subsidies arose from the need to keep energy affordable as prices soared to record highs in the pre-crisis boom. But such programs quickly morph into social benefits that actually benefit owners of cars and big houses, rather than their intended targets. The IMF estimates that only about 10% of subsidies help the poorest 40% of people.

The message is slowly hitting home. Governments across the world have rolled back subsidies, in some cases redirecting the billions they have saved to more needed services. Last year India saved $5 billion by halving its petroleum subsidy, counting on the sharp drop in world oil prices to cushion the blow. Indonesia saved about $2.8 billion dollars—20% of its budget–by doing much the same thing.

Some argue that the ready-made system of tax breaks could be shifted to other, more deserving uses. “The subsidies are a significant problem, but also an opportunity,” says Shelagh Whitley, an ODI climate research fellow. “Governments are currently providing support in a century-old system. But we could use those exact same tools for low-carbon energy systems.”