Why CNN Was Wrong to Suspend a Reporter for a Tweet 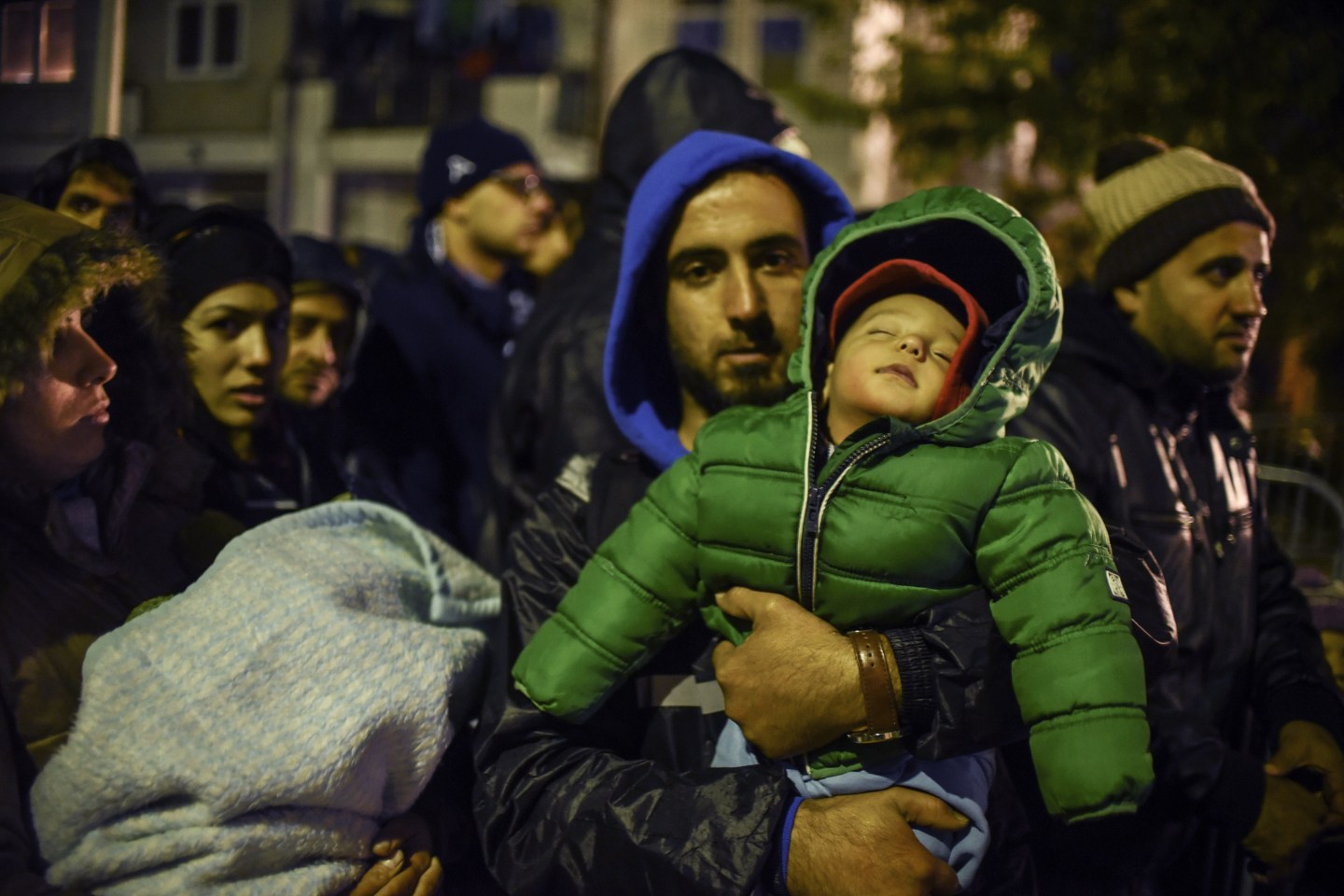 A man carrying his child waits with other migrants and refugees to be registered in a refugee center in Presevo, on October 25, 2015, after crossing the Macedonia-Serbia border. European Union and Balkan leaders met on October 25 to tackle the migrant crisis as Slovenia warned the bloc will "start falling apart" if it fails to take concrete action within weeks. AFP PHOTO / ARMEND NIMANI (Photo credit should read ARMEND NIMANI/AFP/Getty Images)
Photograph by Armend Nimani — AFP/Getty Images

There’s been a lot of criticism expressed on social media about a proposed bill that would block Syrian refugees from the U.S. At least one of the many tweets and Facebook posts critical of the move came from a CNN reporter, global affairs correspondent Elise Labott. She commented that the Statue of Liberty would hang its head in anguish if it could—and that expression of sympathy for the refugees got her suspended from the news network for two weeks.

This isn’t the first time that CNN has penalized one of its journalists for expressing an opinion on social media, but it’s just as wrong this time around as it was every other time. Why? Because the days when CNN and others could make a claim to some kind of Olympian objectivity about the news are over. And that’s actually a good thing.

Although CNN hasn’t discussed the suspension, it seems obvious that the network chose to penalize Labott because she expressed a political opinion. Unlike host Don Lemon, who routinely expresses objectionable opinions — in many cases on the air — or anchor Anderson Cooper, reporters at the network are expected to keep their political opinions to themselves.

Insiders say CNN head Jeff Zucker doesn’t like social media and doesn’t want his journalists being accused of bias because of a tweet or a Facebook post. And he’s likely also concerned about appealing to advertisers.

As Michael Calderone at Huffington Post has pointed out, however, Labott has expressed political opinions before on Twitter, including one case in which she said that President Obama was “whining about criticism” at the G-20 summit meeting. That didn’t get her suspended. But a tweet that is critical of the Republican-sponsored anti-refugee bill did.

That’s not going to help the network’s argument that it encourages objectivity—all it’s going to do is exacerbate criticism that CNN accepts bias only when it bends in a specific political direction.

The idea that journalists should somehow remain above the fray and never express an opinion about the topics they cover is as antiquated as the idea that there is only one 24-hour news network. The news is everywhere, and much of it comes with an opinion attached—and there’s nothing necessarily wrong with that, so long as any bias or conflict is made clear. Journalists obviously still have to be fair, but the expectation that they will be unfit for duty if they don’t try to remain scrupulously objective is absurd.

Under what law of journalism is it wrong to a) express sympathy for destitute people & b) criticize politicians? https://t.co/JQevopMflI

And as NYU journalism professor Jay Rosen has argued, the attempt to be evenly balanced on every issue can lead to a problem he calls the “view from nowhere,” in which there is so much balance it arguably distorts the issue.

Obviously, it’s likely to be difficult for a reporter who has called Donald Trump a moron or a racist on social media to cover him or his campaign easily. But that’s very different from what Labott did in her tweet—she expressed a human emotion of sympathy as a result of some proposed legislation.

If anything, the fiction that journalists must have no opinions on the issues they cover arguably does more damage to a brand than the admission that they have opinions. If a person told you that they have no thoughts one way or the other about a contentious issue after covering it closely for years, you would think they were either lying or an idiot. So the only conclusion possible is that they have one, but they are covering it up. And that’s how suspicion about bias begins.

So CNN suspended a reporter for a tweet but not the two who engaged in vile islamophobia on air?

The only thing Labott is guilty of is admitting that she is a human being, something that more journalists should try now and then. If anything, I would argue that is likely to make her more credible with CNN viewers rather than less.

I made a similar argument several years ago, when CNN producer and veteran reporter Octavia Nasr was fired for expressing an opinion in a tweet. In her case, she expressed sympathy for the death of the spiritual leader of Hezbollah, which is seen by many as a terrorist organization. Nasr explained later that he was a moderating force within the group in many respects, but the damage was done.

CNN viewers are likely significantly more savvy now when it comes to social media than they were when Nasr committed her unpardonable journalistic sin. So Labott’s suspension makes even less sense. All it does is make the network look craven in its attempt to be sympathetic to the Republican side of the House, rather than making it look balanced or objective. And in the long run it could actually do CNN more harm than good, if viewers come to the conclusion it is biased, but is trying to pretend it isn’t.