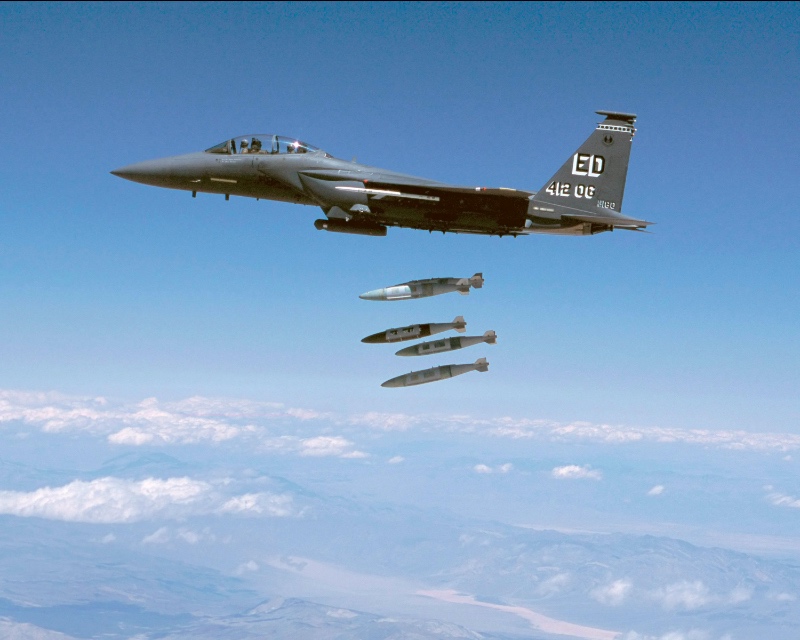 The U.S. military is moving to accelerate shipments of precision weapons to its Middle Eastern allies as their supplies run low after 13 months of continuous bombing in Syria and Yemen.

Speaking to reporters yesterday at the Dubai Air Show, U.S. Air Force Secretary Deborah Lee James said partners across the region are facing shortfalls of precision guided munitions and are pressing the Pentagon to look for ways to speed up deliveries to the region.

“That’s a key message that I’m going to be taking back to Washington and it’s one that we’re working pretty hard,” James said.

Appearing alongside James in Dubai, U.S. Air Forces Central Command (AFCENT) Lt. Gen. Charles Q. Brown said precision guided munitions are “pretty popular” among U.S. allies in the Gulf region, particularly Saudi Arabia, Bahrain, Qatar, and the United Arab Emirates. Those countries have been variously bombing both ISIS targets in Syria and Houthi rebels in Yemen. All those airstrikes are beginning to take their toll on existing stores of smart weapons.

“Not only have we within AFCENT taken steps to make sure we have the right stocks, but we’re also working with partners as we understand more about how they operate and their expenditure rates to make sure everybody has what they need and we can get the job done,” James said.

It’s fair to say that use is high, or at least higher than usual, says Roman Schweizer, a defense policy analyst at Guggenheim Partners. “There has been a fair amount of participation from our NATO allies and GCC [Gulf Cooperation Council] allies both in Syria and then also Yemen in the case of the Saudis,” Schweizer says. “I think the bigger question is: Is this the new normal? If you expect anti-ISIS operations to continue for some time—and I think the case could be made that they’re going to have to increase rather than decrease—there could be a significant amount of spending directed at replacing these munitions.”

The munitions in question here are largely air-to-ground weapons manufactured by U.S. companies like Boeing (“BA”), Lockheed Martin (“LMT”), Raytheon (“RTN”), and General Dynamics (“GD”). Some, like the ever-popular Joint Direct Attack Munition manufactured by Boeing, aren’t actually standalone weapons at all but sensor kits that can be installed on existing “dumb” munitions, imbuing them with GPS and inertial targeting “smarts.”

But ramping up production of smart munitions might be easier said than done. Speaking to Defense News in September, Air Force Chief of Staff Gen. Mark A. Welsh III noted that stocking smart munitions is a problem for the Air Force itself given the vast amount of bombing by it in Syria, Iraq, and elsewhere in recent years.

“Typically if you drop a bomb today, it’s going to take you two years from now to get the appropriation to replace it, another year or two to actually get it on the shelf,” Welsh said at the time. James echoed that caution Tuesday in Dubai, noting that it takes a certain amount of time to ramp up the industrial base to produce a surplus of precision guided weapons.

“It’s not easy to quickly ramp up, and that’s one of the U.S.’s weak points, I think,” says Brad Curran, an industry analyst at Frost & Sullivan. “We spend billions on weapons and some of these basic fundamental things we let atrophy a bit.”

There are things that can be done to accelerate the flow of precision guided munitions to Middle Eastern allies without ramping up production in the near-term, Curran says. The Air Force can push its Gulf allies’ existing contracts for certain weapons to the front of the line or rapidly fill them out of the U.S. Air Force’s own reserves to speed delivery.

Short-term stopgaps not withstanding, the shortfall will ultimately have to be made up by the defense industry. With no sign of a cease fire in Syria, Iraq, or Yemen, America’s Middle Eastern allies will continue to use up their precision weapons stockpiles at a fast rate. Meanwhile, Lt. Gen. Brown said on Saturday that he expects the tempo of U.S. airstrikes to accelerate following several weeks of a slowdown, an action that could further pinch precision weapons supplies.

“These war reserve stocks go up and they go down,” says Byron Callan, a defense industry analyst at Capital Alpha Partners. “There’s certainly going to be business for someone here to replenish all these stockpiles.”

For more on defense, watch this Fortune video: