Egypt’s Economy: The Next Casualty Of The Metrojet Disaster 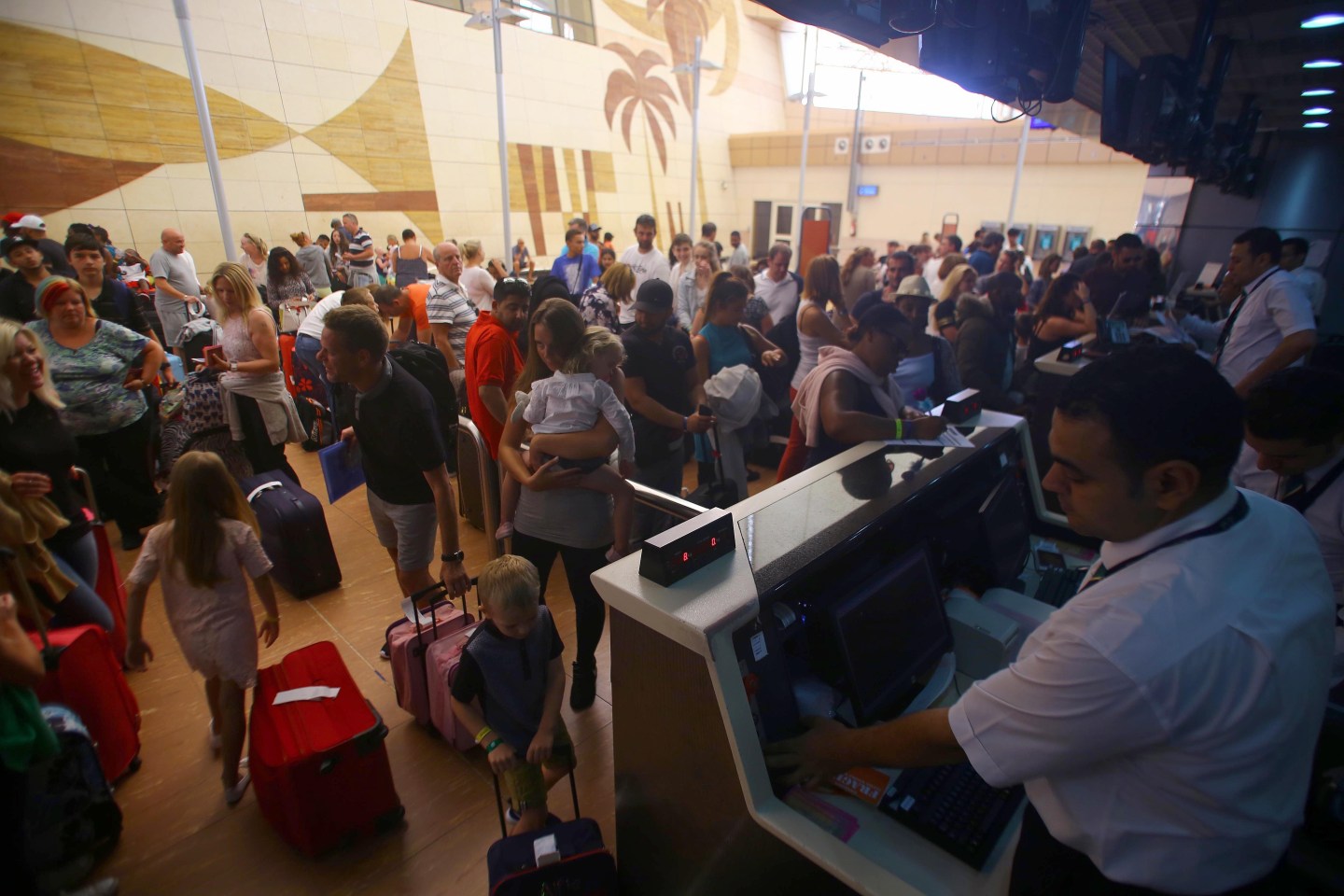 It’s not grabbing the most headlines, for obvious reasons, but the Egyptian economy is looking like one of the biggest casualties of the Metrojet disaster 10 days ago.

If it’s confirmed that the disaster was caused by a terrorist bomb (to which experts now attach a 90% probability, according to Reuters), the Arab world’s most populous nation will likely lose a vital source of foreign currency and, more importantly, jobs. That will make the task of healing the country’s political divide after four years of revolution and repression even harder.

“The damage to the already weak tourist sector could prove the straw that breaks the camel’s back,” Emad Mostaque, a strategist at emerging markets consultancy Ecstrat in London, said in a blog post at the weekend.

Mostaque points out that the central bank has bled foreign reserves in its attempt to keep the decline of the Egyptian pound against the dollar orderly this year.So far, the pound is down just 12% in a year when many emerging market currencies have been battered by the Federal Reserve’s drawn-out shift to a tighter monetary policy. But reserves have fallen 30% since April and now barely cover three months’ worth of exports.

As such, the central bank may be powerless to stop a sharper decline if the flow of tourist money dries up. Tourism accounted for over 17% of Egypt’s foreign currency earnings in 2014, according to the World Travel and Tourism Council, and every one in nine jobs in the country.

And a sudden stop in tourism receipts now seems all but certain: Russia, which sends more tourists to Egypt than any other country (around 3 million a year) has suspended tourist flights to the whole country (the U.K., the second-most important country of origin, has by contrast only suspended flights to Sharm-el-Sheikh, the resort from which the doomed Metrojet airliner took off). Together, the two countries account for 70% of tourist arrivals, Tourism Minister Mohamed Yousef said at the weekend.

Russia has so far airlifted 11,000 tourists home from Egypt in a stream of special flights over the weekend, according to the BBC.

The U.K., which cancelled flights last Wednesday, has meanwhile ferried 3,500 tourists home from Sharm, around a third of the total currently there. Both Russian and British tourists are coming home with only hand baggage, due to safety concerns.

The chaotic scenes are a bitter blow to an economy that had appeared to show signs of stabilizing this year, after the tumult of President Hosni Mubarak’s ouster in the Arab Spring of 2011, and the susbsequent coup d’état against his Islamist successor Mohammed Morsi by the armed forces. Abdel-Fattah al-Sisi, the leader of the coup who is now president, has pursued a brutal repression of Morsi and his followers since 2013.

Before the disaster, the economy had showed tentative signs this year of putting those four years of instability and repression behind it. The IMF had expected the economy to grow over 4% this year, double the average rate since 2011, helped by the opening of a parallel Suez Canal and the revival of natural gas production in the Nile Delta. The stabilization of tourism flows, after a 40% fall from their peak in 2010, had also helped. Unemployment, too, had started to come down, albeit from a still-unsustainable rate of over 13%.

Ecstrat’s Mostaque fears that, if terrorism is proved in the Metrojet case, then al-Sisi’s reaction to it could just make the problem worse, making it politically more difficult for western partners such as the E.U. and U.S. to give him the economic support his country will need.

“As a key regional country, Egypt needs significant international support…as it faces complex and increasingly capable enemies,” Mostaque said. “However, this support must be conditional on a reversal of the crackdown in civil liberties, which only serves to fuel a growing insurgency.”

Egypt is one of Africa’s biggest recipients of foreign direct investment, with around $88 billion in largely European and U.S. money at stake there, according to UN data.

Over two-thirds of that is in the oil and gas industry, which is generally concentrated off the Nile Delta and far removed from the softer targets of the tourist resorts. The one silver lining of President al-Sisi’s visit to London last week (where he was informed of the tourist flight ban as he stepped off his plane), was the signing of a new deal to develop a major new gas discovery in the Nile Delta by BP Plc (BP) and its partners.

But restoring peace, security and foreign confidence is going to take much more than that if ISIS’ boasts of bringing down Metrojet flight 9268 are substantiated.