These Craft Beers For Christmas Hit the Shelves 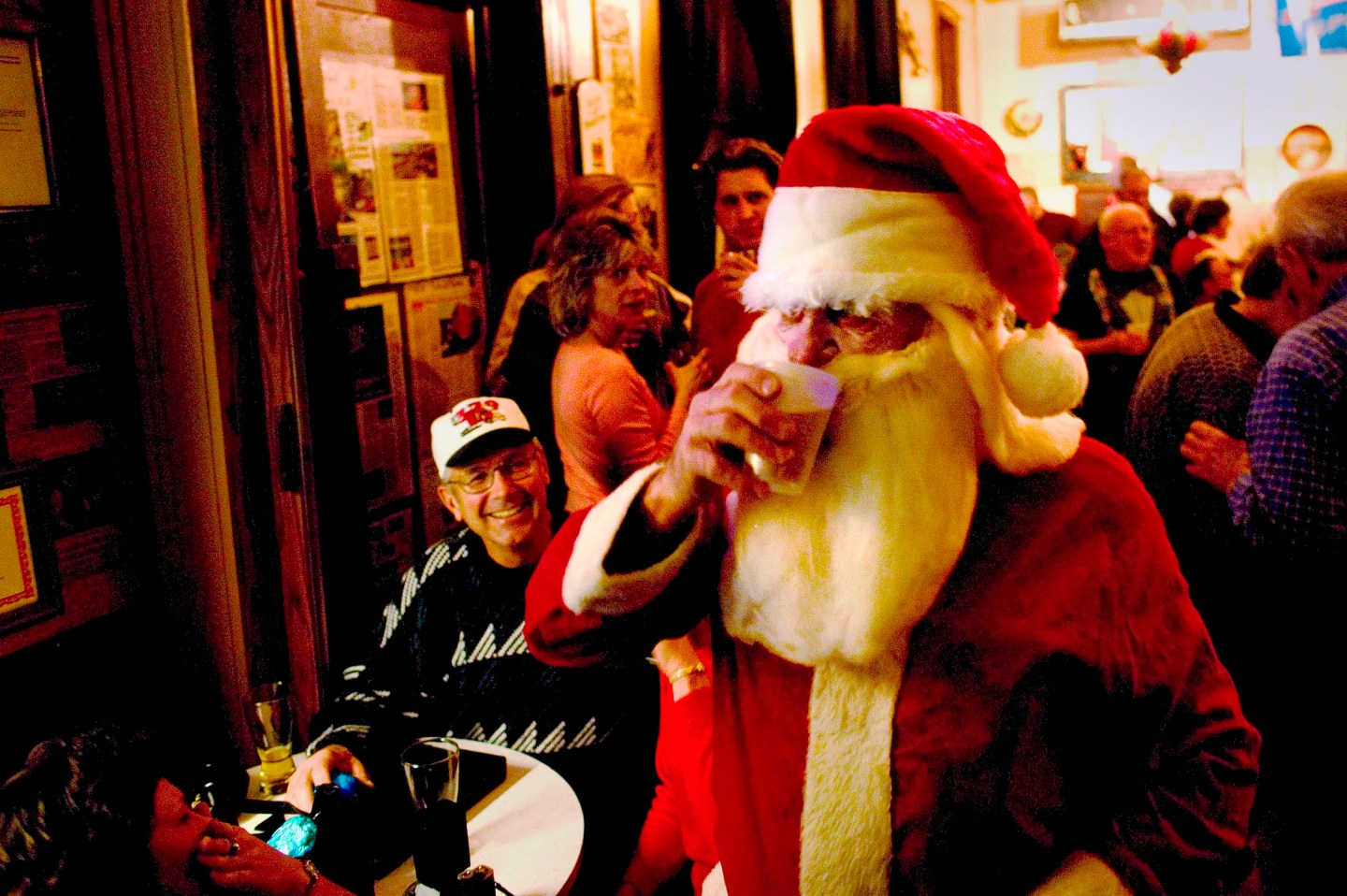 MILWAUKEE, WI - DECEMBER 22: Art Altenburg, Santa #1 takes a drink of beer as he walks around celebrates at Art's Concertina bar annual Christmas party on December 22, 2005 Milwaukee, Wisconsin. Art Altenburg owner and proprietor of the only Concertina Bar in America throws an annual party for christmas, free of charge for any and all who show up. (Photo by Darren Hauck/Getty Images)
Photograph by Darren Hauck — Getty Images

With Halloween now past, retailers are in full-on holiday mode. And craft brewers aren’t far behind. Holiday seasonal beers (not to be confused with winter seasonal beers) are beginning to rush onto shelves – and it looks like a bumper crop this year.

There’s no hard definition of a Christmas beer. Some are malty. Others are spicy, infusing themselves with cinnamon, nutmeg and other variants. They range from cloyingly sweet to bone dry. In other words, they’re a lot like craft beer in general.

Anchor Brewing was one of the first U.S. brewers to embrace the idea of an annual holiday-themed beer. In 1975, owner Fritz Maytag told his team he wanted to do something different than Anchor Steam – and the holidays were the ideal time to do it.

“Christmas, traditionally, was a slower time for beer,” says Mark Carpenter, brewmaster at Anchor Brewing Co. “So Fritz thought that maybe you could pick up a little of that slack with a Christmas beer. They’re fun – and you can do something to celebrate.”

The first was just a variation of Anchor’s Liberty Ale. Since then, the company has changed the recipe each year, but things really started to take off in 1987, the first year Anchor offered a spiced ale, based on the English wassail tradition. (Anchor keeps its Christmas ale ingredients a secret every year. The only thing Carpenter will acknowledge about this year’s batch is there’s no allspice and no frankincense.)

Around that same time period, other brewers began offering their own takes on a Christmas ale – and a cottage industry was born.

You’ll note that the word Christmas is used a lot in these beers, rather than the more politically correct holiday. While a few brewers opt for the more all-encompassing term, most eschew political correctness and stick with Christmas or feature Christmas-themed imagery on the bottle. Once again, Maytag helped set the tone. When Anchor began to distribute the beer, the distributor begged the company to change it to “Holiday Ale” – but Maytag insisted the label says “Merry Christmas and Happy New Year”.

Truth be told, there’s really very little difference between Christmas beers and winter seasonals. Both tend to revolve around similar flavor themes. But Christmas ales stick around for a much shorter time than winter warmers. That very seasonality can provide a sales boost to brewers – and it gives beer lovers something special to look forward to.

“People love seasonal things,” says Carpenter. “Seasonality is a big deal. I worked with a guy who used to say ‘everybody buys six packs of Christmas Ale. They just go out and buy it and have it at Thanksgiving or Christmas.’ But after the holiday is over, you want to move on to something else. I mean, how many turkeys do we eat during the year?”

Even if you’re like me, a traditionalist who would prefer that Christmas in all forms stay in the background until Thanksgiving is complete, there’s something about seeing and tasting these beers that can’t help nudge you toward the holiday spirit. Wondering where to start? Here are a few impressions from this year’s crop:

Anchor Christmas Ale – Anchor calls this an ale, but it’s very easy to confuse this year’s recipe with a stout or porter. It’s thick and rich with chocolate, coffee, and malt flavors, with just a hint of citrus. It doesn’t impart any real spice flavors until after it has warmed to nearly room temperature. And even then, it’s just the slightest whisper of cinnamon. (ABV: 5.5%)

Sweetwater Festive Ale – There are certainly spices in this winter ale, with cinnamon taking a front and center position.. And sure, there’s some chocolate and a hint of coffee from the malt, but ultimately, I walked away thinking more of spice cake than anything else. (ABV: 8.6%)

Avery Old Jubilation Ale – Most Christmas and holiday beers lean in on the spices. Avery prefers to focus on malts. This is a beer meant for big meaty meals. It’s big and bold, with a dominant, creamy malty flavor. You might pick up a little chocolate due to that, but mostly it’s a rich offering that celebrates the season in a unique fashion. (ABV: 8.3%)

Samuel Adams Merry Maker – This thick milk stout balances coffee with the distinct taste of gingerbread, as chocolate dances along the finish. It’s an exceltionally creamy offering that needs to warm before you consume it, so the flavors can truly explode. You may pick up a hint of fig and vanilla as well. (ABV:9%)

Shiner Holiday Cheer – Hands down the sweetest of the holiday ales I tried, this is closer to a Dr. Pepper or Cheerwine soft drink than a beer. The peaches dominate the flavor profile here. (I didn’t taste the pecans that are supposed to be in there.) If you’re a craft beer veteran, this may not appeal, but it’s a good entry beer for newcomers who want to try something different. (ABV: 5.4%)

Thirsty Dog Brewing’s 12 Dogs of Christmas – Much more along the traditional holiday beer lines, this is a spice-intense offering with lots of cinnamon, nutmeg and ginger. It’s loaded with caramel-intense malts and is perfect for sipping near a roaring fire. (ABV: 8.3%)

Brasserie Dubuisson’s Scaldis Noel – If you want to take the express route to holiday cheer, Scaldis Noel is a safe bet. It has a high ABV that’s very noticeable as you drink it. It’s a giant Belgian dark ale that’s full of spice (you’ll pick up nutmeg, but no cinnamon), but they don’t overpower the distinctive banana-like favor of the yeast. Be prepared for a slight burn at the finish. (ABV: 12%)

Grand Teton Coming Home 2014 – The Idaho-based brewery will presumably be offering a 2015 version of this Belgian Quadruple this year, but some stores cellared last year’s offering and have it for sale now. And the beer seems to have benefited from the time. It’s a mix of malty chocolate with spices that have been bottle conditioned. Expect a big taste, with a touch of earthiness mixed with toffee. (ABV: 10%)