This New Book Shows Pope Francis is a Smart Businessman 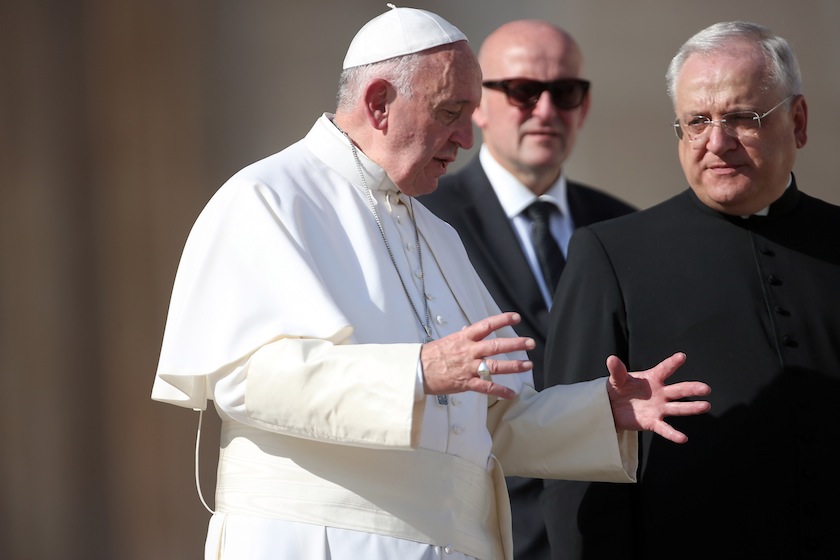 VATICAN CITY, VATICAN - NOVEMBER 04: Pope Francis holds his weekly audience in St. Peter's Square at The Vatican on November 4, 2015 in Vatican City, Vatican. In his catechisis, he continued to reflect on the importance of family as a place where we learn the values of forgiveness and reconciliation. (Photo by Giulio Origlia/Getty Images)
Photograph by Giulio Origlia — Getty Images

In announcing the arrest of two prominent economic advisors for leaking confidential information, the Vatican asserted this week that the accused were guilty of a “grave betrayal” of the Pope’s trust. It may prove true that the pair violated the Vatican’s newly enacted secrecy laws. But for the 1.3 billion Roman Catholics worldwide, the revelations have finally lifted the veil on the rampant mismanagement that the old Vatican hierarchy long concealed from the faithful. It now appears that much of the cash that Catholics send to Rome that’s supposed to be helping the poor is being clandestinely misused to run the bloated Vatican bureaucracy.

In the first days of November, Vatican gendarmes detained two members of a group called the Commission for Reference on the Organization of the Economic Administrative Structure of the Holy See (COSEA), formed by Pope Francis in mid-2013 to perform a full examination of the Vatican’s finances and make proposals for reforms. The Vatican charged that the pair—Monsignor Lucio Balda, handpicked by the Pontiff as COSEA’s second in command, and Francesca Chaouqui, a glamorous, 33-year old PR specialist—had delivered highly confidential recordings and documents to two investigative reporters whose books charging rampant corruption were just published. Chaouqui was released after agreeing to cooperate with the investigation. Balda remains under arrest.

As a writer who’s been following, and sometimes chronicling, the Vatican’s finances for three decades, I expect the kind of muckraking, sensationalist, fact-lite reporting the Italian press routinely produces on the Vatican. But with one of those new books mentioned above, Gianluigi Nuzzi’s Merchants at the Temple, I’m absolutely impressed. The account is packed with excerpts from confidential documents that are no doubt authentic. Even the Vatican tacitly admits as much. The author’s analysis of the numbers and account of the byzantine internal politics are thoroughly convincing. In fact, the figures he reveals both confirm my own reporting about the Vatican but fill in many facts I was unable to obtain. Most of all, Merchants at the Temple shows that a lot of the money isn’t being spent where the Vatican claimed.

Nuzzi already has strong credentials. He’s the author of His Holiness, the 2012 bestseller based on the private letters to Pope Benedict XVI from close advisers—leaked to Nuzzi by the former Pontiff’s butler—that warned Benedict of how Italian suppliers were wildly overcharging the Vatican and how officials were helping them do it. In Merchants in the Temple, Nuzzi draws an admiring but startling portrait of Pope Francis. I had learned from conversations with his advisors that Pope Francis believes in lean, efficient government for a basic reason: The less the Vatican spends on administration, the more it can lavish on what the Pope cares most about, helping the poor.

But Nuzzi shows that the Pope does far more than establish a general tone of frugality. He knows precisely what disciplined and sophisticated financial management is all about. And since Francis fully understands it, unlike previous Pontiffs, he’s impossible to fool. Nuzzi obtained a recording of a meeting of financial advisors hosted by Francis on July 3, 2013, just four months after he replaced Pope Benedict. The Pope first makes a general point about waste in the Curia, the Vatican’s administrative arm:

“It is universally ascertained … that the number of employees has grown too much. This fact creates a huge waste of money that can be avoided.” He goes on to condemn a “30 percent increase in employee expenses” over the past five years.

Pope Francis goes on to demonstrate that he fully understands the importance of competitive bidding and stringent enforcement of contracts:

“We have to create a protocol for estimates and also for the last step, payments. One of the department heads told me they come to me with an invoice so we have to pay. No, we don’t. If a job was done without an estimate, without authorization, we don’t pay.” Who cares if a “poor clerk looks bad?” Concludes the Pontiff: “God help us, but we don’t pay!”

To his credit, the Pope fully backs the COSEA commission in its battle with the entrenched hierarchy. The members are mainly distinguished financial experts from Europe, and they relentlessly expose hidden practices that conceal the true extent of the Vatican’s deficits—and most of all, how money earmarked for charity is being used to plug those shortfalls.

A shocking revelation is the alleged misuse of the money the world’s Catholics send each year to the Vatican, which is known as “Peter’s Pence.” At a single Sunday mass each year on the feast of Saints Peter and Paul, the cash the faithful place in the collection baskets goes directly to the Pope. In the 1980s, Peter’s Pence was routinely used to cover operating budgets, not for charity, as it was intended. Diverting Peter’s Pence to pay for computers and pensions was condemned by church leaders and led to the strong reforms of the 1990s. The Vatican has long maintained publicly that collections from Peter’s Pence aren’t used for operating expenses and go exclusively to charity. Last summer, a Vatican spokesman assured me this was the case; I’m certain that he, like the rest of the world’s Catholics, didn’t know what now appears to be the truth.

According to the documents cited by Nuzzi, dioceses collected 56.2 million euros in Peter’s Pence in 2012. The outside world thought that money was going to charity. In fact, COSEA, in Nuzzi’s convincing account, discovered that 35.7 million euros of the total, or almost two-thirds, was going to administrative expenses, including 5.5 million for printers. The Vatican was channeling another 6.3 million into reserves. Just one euro in five went to charity.

The true fate of Peter’s Pence helps clarify a mystery that’s long baffled this reporter. How does the Vatican get the cash to cover its frequent deficits? Now we know, according to Nuzzi: The funds are coming from what everyone thought were collections for the poor. The Vatican also holds an astounding 378 million euros in reserves, all from past Peter’s Pence contributions. That cash is parked in bank accounts generating little interest and appears to be a rainy day fund for future deficits.

Ever since his ascension, Pope Francis has demanded that the Vatican swing from deficit to surpluses, mainly by cutting costs, and dedicate the extra cash to the poor. So the Vatican is failing in two ways, first by running shortfalls, and second by using Peter’s Pence to fund them.

According to Nuzzi, Francis is furious about the abuse of Peter’s Pence. His goal of freeing funds for charity are clear. As a close advisor to Francis told me last summer, “It’s not just that Peter’s Pence has to go to charity, this has been made clear by Pope Francis. There has to be a surplus. And that too has to go to charity. The risk is that if you can’t balance the books, then you would use Peter’s Pence, and that is out of bounds.”

Pope Francis, who chose the name of the patron saint of the poor, often assails a culture obsessed with money. But he’s obsessed by money in his own way—saving it for the good it can do the poor. As Nuzzi makes clear, this Pope is a fearless reformer with a shrewd mind for business. The leaks may be illegal, but they’re not the real scandal. The scandal is the mismanagement that’s been hidden for far too long. These revelations should make the need for urgent reform obvious to the world outside the walls of the Vatican. And that’s the message Francis has been trying to send all along.