Want To Know The Cost Of The Migrant Crisis? So Does The E.U. 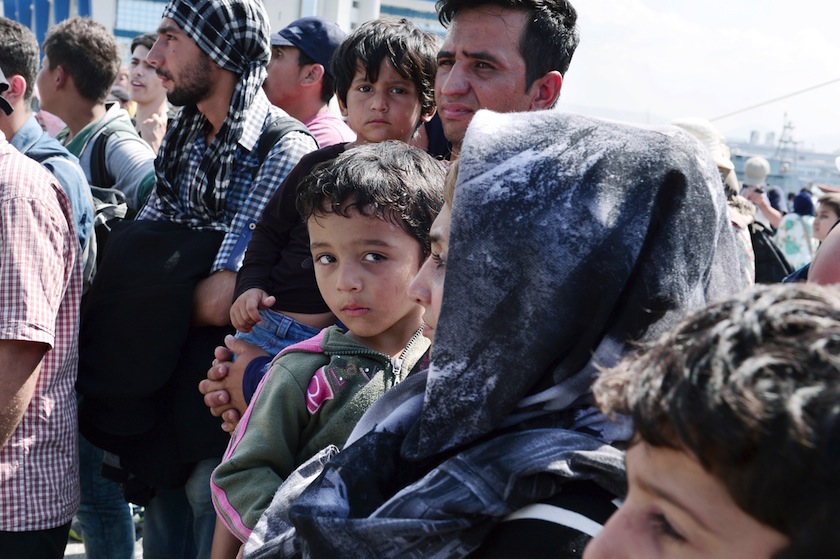 Hundreds of migrants arrive in the port of Piraeus in Athens area on September 8, 2105 after being on the Greek island of Lesbos. Greek officials rushed to open new centres to process thousands of migrants arriving on the country's already overwhelmed islands as EU President Donald Tusk warned the refugee "exodus" could last for years. AFP PHOTO / LOUISA GOULIAMAKI (Photo credit should read LOUISA GOULIAMAKI/AFP/Getty Images)
Photograph by Louisa Gouliamaki—AFP/Getty Images

Want to know what the impact of the migrant crisis on the European economy will be? Then get in line behind the European Union.

On Thursday, the E.U.’s Commission (the secretariat that drafts and polices its laws and compiles its statistics) took a first stab at quantifying the economic effects of the continent’s biggest humanitarian crisis since World War II, and they didn’t even come close to an answer.

In its regular half-yearly update on the 28-country bloc’s economic outlook, the Commission admitted there are still too many imponderables to come up with a reliable forecast, although all of the variants it outlined came, gingerly, to the conclusion that the net impact on gross domestic product will be positive. This is, in the first instance, primarily due to the extra government spending to absorb the influx.

Sweden, which faces the biggest proportion of arrivals relative to its current population, will have to raise spending by 0.5% of GDP this year, the Commission says. Others, both destination and transit countries, will spend something more in the region of 0.2% of their GDP. If (and it’s a big if) the migrants arriving have, or achieve, a skill set equal to the native population, then the annual boost to GDP could be over 0.25% from 2017 to 2020. However, GDP per capita would fall slightly, owing to the downward pressure on wages from the increased labor supply. Inflation-adjusted wages could drop by around 0.2%, the Commission says.

But there are many unknowns. Among the ‘known unknowns’ are: the overall number of arrivals to be reckoned with (double-counting is a big problem, given the number of borders the migrants will cross); the migrants’ skill levels; and their age distribution.

But there’s another set of unknowns; namely, the ability of the E.U. member states to get the best out of the new arrivals. That revolves around how much governments are willing, or able, to spend on processing applications, accommodation, and training in languages and job skills. All of this is coming at a time when Europeans are the most heavily taxed people on the planet, and the Eurozone in particular is still recovering from a near-death experience with public debt.

The Commission’s baseline assumption is that 3 million people will arrive in the E.U. between 2015 and 2017, of which 1.2 million are expected this year alone. After sifting out those who won’t qualify for asylum (around half), the inflow equates to 0.4% of the E.U.’s current population.

As the Commission points out, that’s not a big deal in pure numerical terms. The trouble is that the vast majority of migrants want to settle in just two countries (Germany and Sweden), and E.U. efforts to share the burden by quotas are being fiercely resisted by many national governments, which say they either can’t afford it or don’t want a large inflow of predominantly Muslim immigrants. Aware that that dispute is ongoing, the Commission treads very lightly in its assessment of the medium-term impact.

It’s no secret that immigrant communities tend to fare worse in downturns and fail to make up for that when the economy turns around. Even in Germany, where employment has never been higher than it is today, the jobless rate for foreigners is over three times as high—at 13.6% of the registered population—as it for natives. In Spain, which absorbed 6 million foreign citizens in its 13-year boom up until 2008, reports of African agricultural workers living in conditions equivalent to slavery are now commonplace. And the Commission admits that employment rates for asylum-seekers seldom reaches that of labor migrants. “Labor market outcomes thus crucially depend on how quickly and how well refugees are integrated,” it sums up.

In short, the cost of absorbing the migrants is undeniable and (sort of) calculable. The benefits, in the form of a larger workforce that will offset the decline of an aging native population, are uncertain, but will only be realized, the Commission implies, if E.U. member states do a better job of integrating new migrants than it has done with previous generations.

Right now, from Poland and Hungary to France and the U.K., it isn’t clear whether they even want to do that. And if one thing is certain, it’s that without a massive collective effort of political will, a humanitarian, social and, consequently, an economic disaster for Europe is coming.