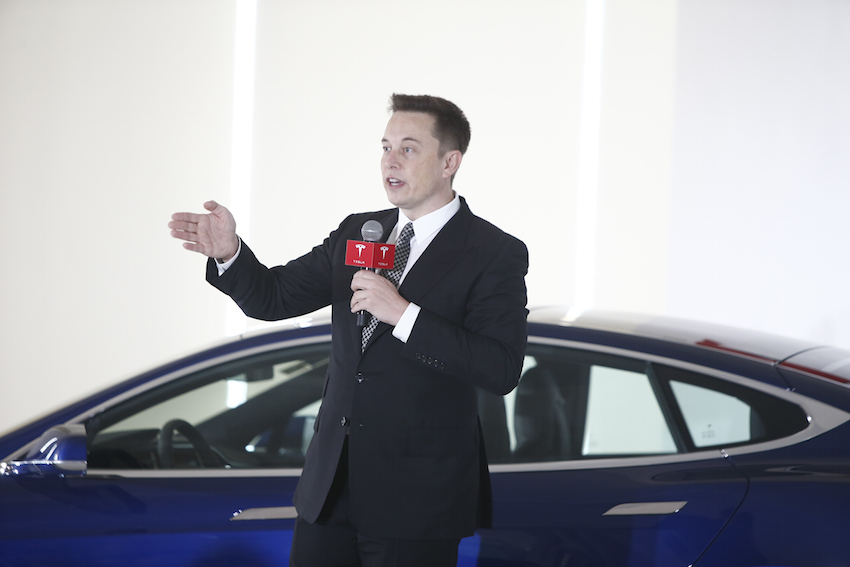 BEIJING, CHINA - OCTOBER 23: (CHINA OUT) Elon Musk, Chairman, CEO and Product Architect of Tesla Motors, addresses a press conference to declare that the Tesla Motors releases v7.0 System in China on a limited basis for its Model S, which will enable self-driving features such as Autosteer for a select group of beta testers on October 23, 2015 in Beijing, China. The v7.0 system includes Autosteer, a new Autopilot feature. While it's not absolutely self-driving and the driver still need to hold the steering wheel and be mindful of road conditions and surrounding traffic when using Autosteer. When set to the new Autosteer mode, graphics on the driver's display will show the path the Model S is following, post the current speed limit and indicate if a car is in front of the Tesla. (Photo by ChinaFotoPress/Getty Images)
Photograph by ChinaFotoPress — Getty Images

Tesla CEO Elon Musk is pretty confident that all cars will be self-driving. And he’s thinking it’ll happen pretty quickly.

In response to a question during Tesla’s third-quarter earnings conference call, Musk said that “all cars will go fully autonomous in the long-term.” But he didn’t just stop there, reported USA Today.

Musk, who is known for his outlandish statements at times, added that in the future, it would be “quite unusual to see cars that don’t have full autonomy” within a window of 15- to 20-years.

Unsurprisingly, he said that it would be even sooner for Teslas. The company’s shares rose Tuesday despite the company reporting its biggest loss in 10 quarters, according to Reuters.

During the call, the company announced its already putting together batteries for use by utilities and building owners in its Gigafactory.