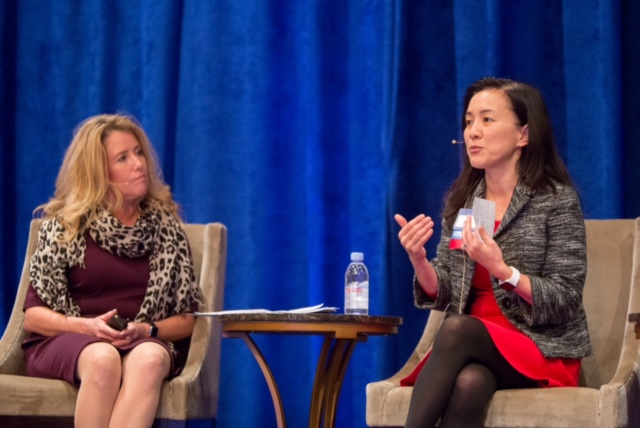 Uber general counsel Salle Yoo has her own formula for hiring a diverse workforce: Appoint women in senior roles early on—and pay them the same as the guys. Last week at a conference in Washington, D.C., hosted by ChiPs—an organization of female intellectual property lawyers in technology—Noreen Krall, Apple’s (AAPL) head of litigation, led a panel that included Yoo and Michelle Lee, a former Google (GOOG) exec who is now America’s Under Secretary of Commerce for Intellectual Property and Director of the U.S. Patent and Trademark Office. While these women have had relatively little problem asking for (and getting) what they need to succeed, they talked about how even the smartest women typically shy from asking for what they deserve. Yoo shared very smart advice for how she deals with this and how she promotes diversity and equal pay at Uber.

While I was working at the law firm Davis Wright Tremaine, the ABA Journal published a story called “Early Exits,” noting that nearly 100% of minority women lawyers leave their law firm within eight years. In other words, the probability that a minority woman associate would move up to partner was basically zero.

This was 2006, and the story made me dig in my heels at my own firm and think, “I’m going to learn how to make partner and then teach other women how to advance.”

My first five hires were women. I wasn’t looking for women specifically. I set out to hire the best lawyers and legal team members to serve the needs of a quickly scaling company. I sought smart legal professionals who aligned with my vision that we would be partners in growth and who would thrive with the pace and pressure of a startup. As we’ve grown, my team has diversified, but one fact is notable: My female leads tend to build teams that are far more diverse, even beyond gender.

Being intentional about who you place at the top matters because of the flow-down effect. So it’s ever critical who you put there.

I also take a data-driven approach in striving towards pay equity. Before any offer is made to a potential hire, I require that HR provide me with an updated chart that identifies compensation information for every hire in my department in the last year, by job level. This chart gives me the ability to double-check that men and women who have equivalent experience and are going into equivalent jobs receive equivalent salaries. Ensuring parity on the way is key; otherwise, the delta will simply grow over time.

I recently received a proposal that recommended that a woman hire receive more than $10,000 less in salary than a male lawyer at the same level, despite the fact that she had three years more experience. I called out the fact, took the position that “this isn’t going to fly,” and asked that the proposal be re-run.

I also have a policy that if someone gets a sign-on bonus, the other person who has equivalent experience and comes in at that level at that same time, he or she gets the same upfront bonus. I once told a female hire, “I’m giving you a sign-on bonus even though you didn’t push for it.” I told her so that next time, she would think to ask for it directly.