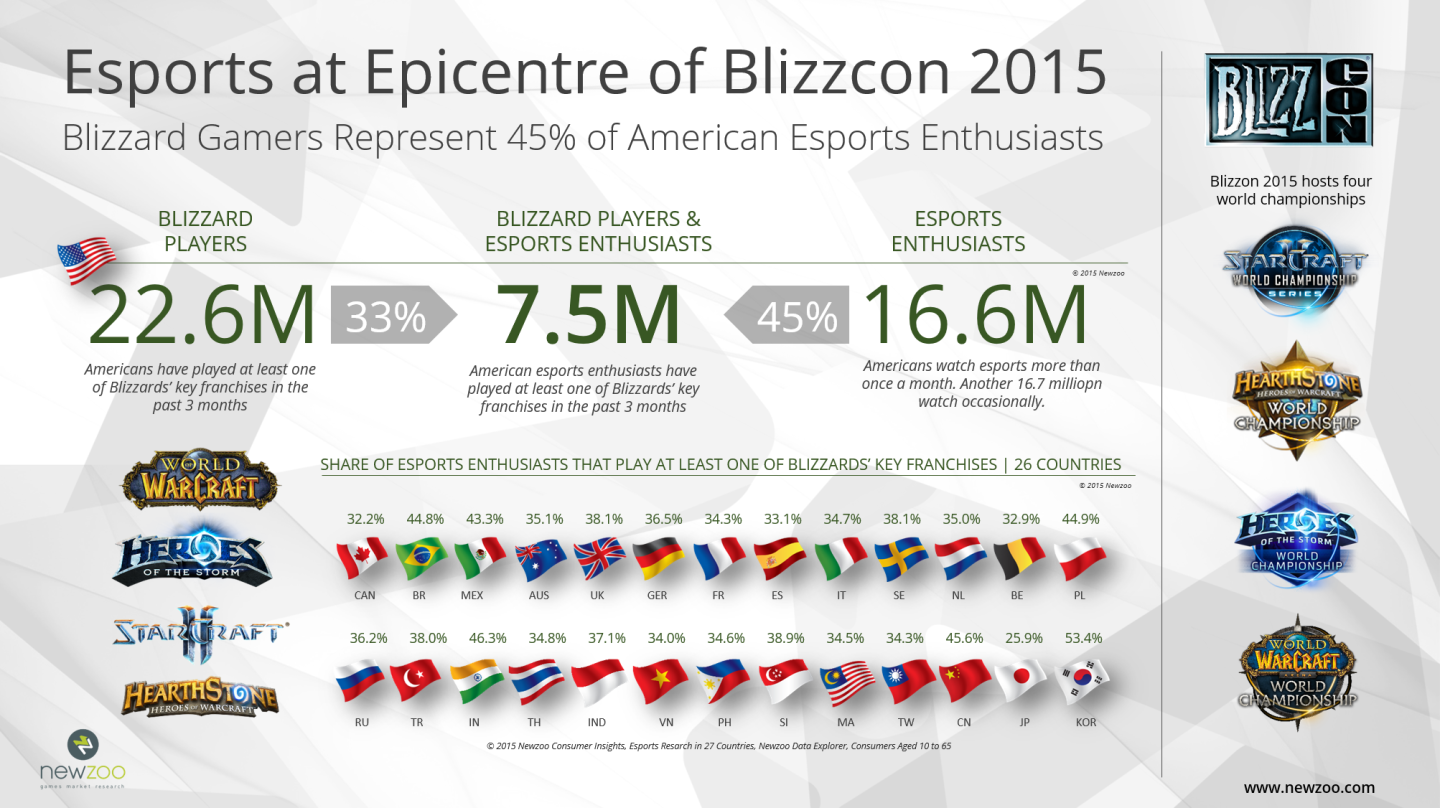 Blizzard Entertainment, a division of Activision Blizzard Inc., was one of the earliest game publishers to embrace eSports. Long before livestreaming channels like Twitch (which Amazon purchased for $1 billion in 2014) catapulted professional video gaming to record audience numbers; Blizzard was organically launching small StarCraft tournaments to help foster gaming communities.

According to Kim Phan, senior manager of eSports at Blizzard Entertainment, these small gaming communities led to larger and larger tournaments and events, which are now popping up all over the world.

“eSports was new and exciting and we loved it, so there was never any question about whether we would carry our eSports commitment over to StarCraft II and other games,” Phan says. “We believe that eSports isn’t limited to the professional scene—eSports is for everyone. It encompasses large-scale events like the Road to BlizzCon and the World Championships as well as the countless community-run tournaments that take place each year.”

The annual BlizzCon convention, which takes place Nov. 6-7 at the Anaheim Convention Center, attracts over 25,000 community members from around the world. The convention features StarCraft II, Hearthstone, World of Warcraft, and Heroes of the Storm world championships, all with matched livestreamed in high definition at www.blizzcon.com. The entire convention, including the eSports tournaments, is available on AT&T/DirecTV pay-per-view for $40.

“We see eSports as one of the best ways we can support our player community,” Phan says. “People don’t just enjoy playing games, they also like being immersed within the culture. That includes enjoying an entertaining streamer on Twitch, meeting people who share their interests at BlizzCon, and watching eSports, where the most skilled players in the world compete for fame and fortune.”

Over $3.45 million is up for grabs to eSports teams as they compete in the Road to BlizzCon tournaments across four games with an additional $1.25 million available to the top players at BlizzCon 2015. Each game has its own qualification path to BlizzCon, with thousands of players participating in the earlier qualification rounds through a partnership with ESL (a company that recently was acquired by Danish media company Modern Times Group for $87 million).

“This makes BlizzCon like the Olympics, offering the very best in eSports excellence with the most competitive players from 40+ countries coming to one location to compete across a variety of events,” Phan says. “Last year we had millions of people watch from home, and we’re anticipating millions of viewers again this year.”

Blizzard is setting up its infrastructure for what could be an expanded eSports offering come BlizzCon 2016. The game maker is promoting the new StarCraft II Archon Mode, which adds two versus two gameplay matches, during this year’s convention. StarCraft II shoutcaster John “TotalBiscuit” Bain believes this mode could infuse new excitement within the eSports scene for a game that really started the entire eSports phenomenon in Korea in the late 1990s.

In addition, Blizzard is releasing a new multiplayer game, Overwatch, next year. Phan says Blizzard thinks that title could make for an action-packed competitive eSport as well.

“Overwatch and StarCraft’s Archon Mode are exciting new Blizzard initiatives that will broaden and strengthen the portfolio of Blizzard’s competitive games,” research firm Newzoo CEO Peter Warman says. “It will only add to the self-proclaimed Olympic status of Blizzards’ BlizzCon event that more than ever puts eSports at its center this year.”

Blizzard has taken a new approach to developing its games because of eSports. Phan says traditionally video games are developed for the player, and the core game features are developed with the player in mind. As the eSports scene has grown, developers have considered a new type of game consumer: the spectator.

“eSports game developers have to take into account how the game looks to the spectator, and that introduces a new set of challenges to solve during development: ‘Is the game fun to spectate? Is the most important information communicated to the spectators? Is the user interface designed for a spectator experience?,’” Phan says. “These are the types of new questions that game developers are adapting to if they’re interested in maximizing their games’ eSports potential.”

In addition to changing the way games are created, Blizzard has also embraced the college sports culture and introduced games like Heroes of the Storm and Hearthstone to the mix. Both of these games have received broadcast time on ESPN2 as the best college teams from across the nation competed in leagues this year.

“Since more and more college students have been participating in eSports, the time is right to provide college gamers with the opportunity to compete, just as they would in collegiate athletics,” Phan says. “We’ve had tremendous success with Heroes of the Dorm and the Collegiate Hearthstone Championship. College sports help students pay for tuition, build teamwork and communication skills, and create lasting memories. We believe eSports has the same power, and our collegiate tournaments aim to bring positive experiences like these to all Blizzard gamers in college.”

While BlizzCon is the pinnacle of Blizzard eSports, and one of the key global eSports events (along with Valve’s The International and Riot Games’ League of Legends World Championship), Blizzard continues to build out its base of players and its worldwide audience to keep fans engaged year-round.

For more on video game streaming, watch this Fortune video on Youtube and Twitch: