Apple Thinks It Can Win This Case at the Supreme Court 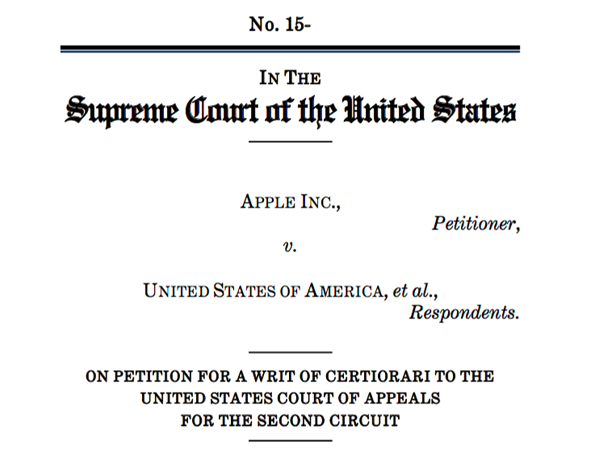 It’s no accident that the petition Apple submitted to the Supreme Court last week begins with a reference to Leegin Creative Leather Products, a manufacturer of fancy cowboy belts. Or that the case known as Leegin v. PSKS comes up 81 times in the 250-page document.

Apple’s appeal rises or falls on Leegin. And Leegin, it turns out, is a precedent this Supreme Court knows well.

Seven of the nine justices who would hear Apple’s appeal were sitting on the high court in 2007 when Leegin was decided. And five of them saw things Apple’s way—or so the company believes.

Leegin raises the question at the heart of Apple’s antitrust defense: Whether the actions of a vertical player in a price-fixing conspiracy must be judged by the same antitrust rules that govern the activities of horizontal players who, by law, are supposed to compete with one another.

The facts in the Leegin case bear a striking resemblance to Apple’s. Here’s Wikipedia’s summary (drawn from court records):

“Leegin, a manufacturer of leather apparel, concluded that its interests would be best served by opting out of a price war ‘race to the bottom,’ focusing instead on quality and brand cachet. Accordingly, with specific exceptions, it decided to refuse sale to retailers if they intended to discount its products below their recommended retail price. Five years after this policy was introduced, Leegin discovered that Kay’s Kloset was violating the policy by marking down the Leegin products by 20%. When Kay’s refused to comply with Leegin’s policy, Leegin cut them off. PSKS, the parent company of Kay’s, sued charging that Leegin had violated antitrust laws when it entered into ‘agreements with retailers to charge only those prices fixed by Leegin.'”

It’s not a perfect fit. Leegin was a manufacturer cutting deals with retailers. Apple was an e-book distributor, negotiating contracts with publishers. Leegin was well-established in the leather-goods trade. In the e-books market, Apple was a new entrant.

But in both cases federal judges rejected the defense that their respective deals were procompetitive, given market conditions. Their actions were found illegal per se—on the face of it. No ifs, ands, or buts.

In Leegin, the Department of Justice and the Federal Trade Commission recommended replacing the per se rule with the rule of reason, a legal framework that takes market conditions into account. The Supreme Court agreed.

“Vertical retail-price agreements have either procompetitive or anticompetitive effects, depending on the circumstances in which they were formed,” wrote Justice Anthony Kennedy. He was joined by a majority that included Chief Justice John Roberts, Antonin Scalia, Clarence Thomas, and Samuel Alito.

In her decision in the Apple case, District Judge Denise Cote acknowledged that the company’s entry into the e-book market increased competition and benefited consumers. But because both Steve Jobs and Vice President Eddy Cue had actively participated in the price-fixing deal, Judge Cote ruled that Apple’s orchestration of the conspiracy was illegal per se.

Her ruling, and its affirmation by two of the three appellate judges in the 2nd Circuit, created what the (sharply) dissenting judge described as a “circuit court split.” Apple seized on that split and boiled the case down to a single question. Here’s how it was presented to the court:

“In 2010 Apple launched the revolutionary iPad, and with it, the iBookstore, an innovative retail platform; together, they disrupted Amazon’s dominant position in the e-books market. Apple entered with a new agency business model, concluding vertical arrangements with e-book publishers that included commonplace provisions that are often procompetitive and unquestionably served Apple’s legitimate business objectives in offering consumers a new e-books platform. Yet a divided court of appeals panel condemned Apple’s conduct as per se unlawful under Section 1 of the Sherman Act because its vertical activities supposedly facilitated horizontal collusion among the publishers, who wished to be free from Amazon’s dominance. The panel majority declined to follow this Court’s decision in Leegin Creative Leather Products, Inc. v. PSKS, Inc., 551 U.S. 877 (2007), which instructed that such vertical conduct must be analyzed under the rule of reason, and also rejected another circuit’s decision that properly followed Leegin.

“The question presented is:

“Whether vertical conduct by a disruptive market entrant, aimed at securing suppliers for a new retail platform, should be condemned as per se illegal under Section 1 of the Sherman Act, rather than analyzed under the rule of reason, because such vertical activity also had the alleged effect of facilitating horizontal collusion among the suppliers.”

The petition is admirably lucid and almost Jobsian in its simplicity. You can read it here: Petition for a Writ of Certiorari

The Justice Department response is due by Nov. 28—although the DOJ can ask for a 30- or 60-day extension. If the government moves quickly, we could get a ruling before the end of June.

For more on the e-book case, see watch this video: