Venezuela faces fresh threat from one of its latest defectors 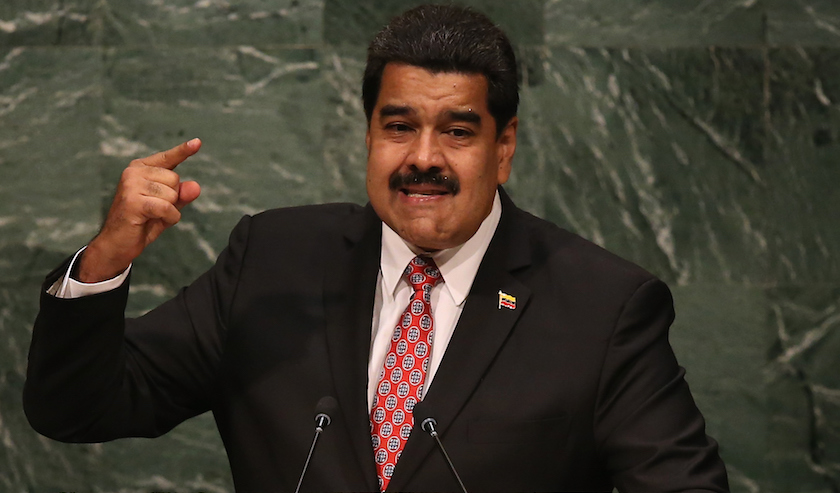 The defection of a leading figure in the plot to imprison the Venezuelan government’s leading political opponent is posing a fresh threat to the corrupt, tottering, ultra-anti-American regime.

The former loyalist is Franklin Nieves, who fled in October from Caracas to Miami, where he’s seeking asylum. Nieves was one of the two prosecutors in what may be the world’s’ most closely watched case of political persecution, the show trial of opposition leader Leopoldo Lopez, who’s now serving a nearly 14-year sentence for allegedly “inciting violence,” a charge based on a speech he delivered at an anti-government demonstration early last year.

Nieves is now apologizing for his role in the Lopez case, declaring that the 44-year old opposition leader was wrongly accused in a “totally political trial,” and assailing the government for refusing to allow Lopez to present witnesses and evidence in his defense. The former prosecutor is claiming that he would have faced years in prison if he refused to pursue the “bogus” case. Nieves’ inside account of how the regime of President Nicolas Maduro orchestrated Lopez’s arrest, and dictated the sentence has let loose a fresh explosion of anger in Venezuela’s streets, cafes, and oil fields.

I recently collected a first-hand story from Lopez’s father, Leopoldo (Leo) Lopez Sr, whom I knew as a student at the Hun School, a New Jersey prep school, in the 1960s. (His son, Leopoldo, is a Hun graduate as well.) On the phone from Madrid, Leo related how Diosdado Cabello, a top Maduro lieutenant and a leading protégé of the late strongman Hugo Chavez, tried to push his son to leave Venezuela, then carried out his arrest, and managed his trial. “Leopoldo went into hiding in mid-February of 2014 after the government put out a warrant for his arrest,” recalls Leo. “On February 14, about midnight, I had 30 guys dressed in black with machine guns surrounding my house in Caracas looking for him.”

Two hours later, Leo had a visitor. It was the president of the National Assembly, Cabello. “He talked to my wife and myself for two hours,” Leo says. “He told me Leopoldo was in danger, that many people wanted to kill him. He returned two days later at 2 a.m., and we had the same discussion. He said Leopoldo should go to an embassy, seek asylum, and leave the country. He recommended that he go to China.” The implied threat, says Leo, was that the choice was between years in jail, and permanent exile. Leo informed Cabello that his son would refuse to leave Venezuela, whatever the consequences.

The day of the second meeting, Leopoldo surrendered to Cabello, who initially promised a fair, prompt trial. “He was civilized, not at all aggressive or menacing,” says Leo. “The idea was that we should trust the judicial system. I told Leopoldo’s wife, ‘This man is a liar. Don’t believe him.’”

Leo thinks that Nieves’ revelations will swell the rising wave of opposition and could even hasten the government’s fall. Venezuelans are suffering from shortages of food, blackouts, and watching prices rise over 15% a month in the world’s worst outbreak of hyperinflation. The fall in oil prices has exposed the Maduro government’s rampant mismanagement. His United Socialist Party is deeply unpopular.

A crucial mid-term vote for Venezuela’s parliament is scheduled for December. Right now, the party led by Leopoldo, Free Will, should win in a landslide—if votes are actually counted. “We don’t know if we’ll have fair elections or not,” worries Leo. “We should get 75% of the seats. But the voting is all electronic. The whole system is a black box. The government has tampered with votes before.” The opposition, he says, has no right to demand a recount in the case of fraud. “The opposition is asking desperately to have a valid audit, or an international observer,” he says. So far, such calls have not been heeded.

The rules state that parliament can declare amnesty with a simple majority vote. So if Free Will takes control, it’s certain that Leopoldo will win freedom, and regain his position as Venezuela’s leading reformer. In that role, he would rally voters to demand a referendum that could force Maduro from office, and perhaps where he wanted to force his opponent: into permanent exile.

Regime change in Venezuela could spark a major economic revival for this country of 33 million that’s twice the size of California and boasts the world’s largest oil reserves. “It’s amazing how many big U.S. auto and other companies keep working in Venezuela,” marvels Leo. “It shows how much potential we have, and how much they want to be here when the regime changes. For cars alone, Venezuela should be as big a market as Italy.”

Trained as an economist at Columbia University and the Wharton School, Leo Lopez himself ran afoul of Cabello. He serves on the editorial board of a prominent Caracas newspaper that recently ran stories accusing Cabello of drug trafficking. A judge issued an order barring Leo from leaving Venezuela. Fortunately, he was in the U.S. for a medical checkup when order was made, and he is now essentially living in exile. Meanwhile, his son is held in a military prison for himself alone. “They have two buildings,” says his father. “In one, there are 170 prisoners, generals to soldiers. In the other, there’s four floors and one inmate, Leopoldo.” He’s the most popular figure in Venezuela, the young dissident who could rescue his country and welcome his father home.