Why Paul Volcker was key to Jimmy Carter’s economic legacy 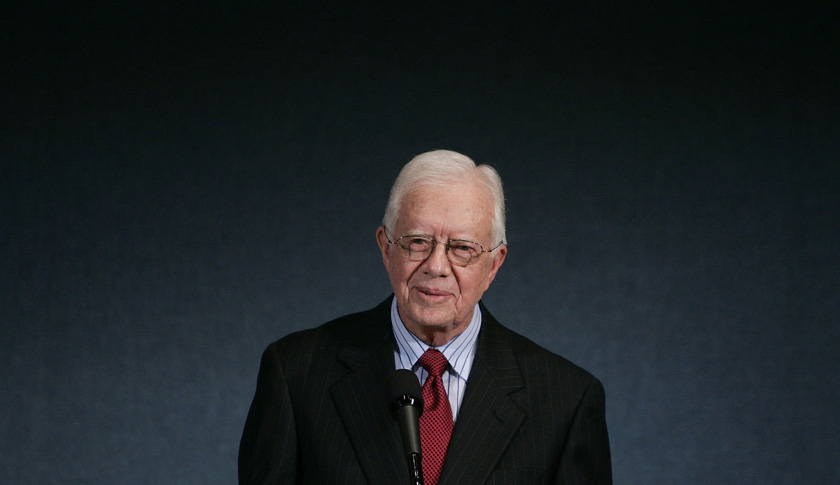 WASHINGTON - APRIL 04: Former President Jimmy Carter speaks after being awarded the Ridenhour Courage Prize April 4, 2007 in Washington, DC. Carter was recognized for his life-long defense of the public interest, his passion for social justice, and the courage he has displayed in speaking forthrightly on contentious and controversial subjects, according to the the Nation Institute and the Fertel Foundation, which jointly award the prize. (Photo by Alex Wong/Getty Images) *** Local Caption *** Jimmy Carter
Photograph by Alex Wong — Getty Images

It’s not a compliment when a president’s economic record is compared to that of Jimmy Carter’s, who held office during a troubled economy. Republican presidential candidates Donald Trump and Ted Cruz have bemoaned President Barack Obama’s slow growth economy as similar to Carter’s. Their criticism parrots the conventional view that Carter, even according to his biography on the White House’s website, presided over “continuing economic woes of inflation and unemployment.”

But it’s unclear how much blame Carter deserves. In his insightful, book The President as Economist, economist Richard Carroll determines that nearly 50% of a president’s economic record is based on what he inherited. The great inflation of the late 1960s, exacerbated by the oil shocks of the 1970s, continued and indeed got worse during Carter’s presidency. And when it comes to implementing economic policy, there are limitations to presidential power. “Before the president makes a decision that affects the economy, so much has already been determined: the budget, labor policy, trade policy, and monetary policy,” Carter told me in September during an interview with him in his office in Atlanta.

Turning around a faltering economy is hard to do, let alone in four years. It’s a point that wasn’t lost on Obama when he said, “I’m not going to let [Romney] win … so that he can take all the credit when the economy turns around,” according to Glenn Thrush’s Obama’s Last Stand published in 2012.

But just as critics lament Carter’s economy and cite supporting economic facts, they praise the man who Carter selected to head the Federal Reserve, Paul Volcker. “I liked Paul Volcker a lot,” said Donald Trump earlier this year. Separately, he said, “I think his policy and his demeanor there was something very solid about him.”

Other notable Republicans who have praised Volcker over the years include Ron Paul, the Fed’s harshest critics: “If I had to name one person that did a little bit of good, that was Paul Volcker. He at least knew how to end — or help, you know, end the inflation,” Paul said in 2011.

So why do folks praise Volcker and trivialize the man who appointed him? I asked Carter the same question. “It’s for historians to decide who deserves credit and how one will be remembered,” he said. “But it certainly wasn’t an easy choice to appoint Paul,” he explained. “My advisers were not all in favor of selecting him. They knew that if I appointed him, he would institute the tough medicine of tight monetary policy, which would be difficult for the economy in the short run.”

When Carter was mulling who to appoint as head of the Fed, his friend Bert Lance, a Georgia banker who served as onetime budget director, called the White House to offer his two cents: “I don’t know who the president is thinking of for Fed chairman. But I want you to tell him something for me: He should not appoint Paul Volcker. If he appoints Volcker, he will be mortgaging his reelection to the Federal Reserve.”

Volcker wasn’t Carter’s first choice. In July 1979, Carter asked for the resignations of members of his cabinet, including Treasury Secretary W. Michael Blumenthal, who had clashed publicly with other members of Carter’s administration. Carter filled the treasury position with G. William Miller who was then serving as Chair of the Fed. Volcker, who was the president of the New York Fed, didn’t think he was in the running to replace Miller at the Fed – and he was right. Carter first offered the job to David Rockefeller, Chairman of Chase Bank, but he declined: “As a wealthy Republican with a well-known name, and a banker to boot, it would have been extremely difficult for me to make the case for tight monetary policy and sell it to…an angry public,” he wrote in his autobiography.

In the subsequent days, a consensus formed around selecting Paul Volcker on Capitol Hill and in the markets. Yet key Carter officials still advised the president that Volcker would be too conservative with his policies and he wouldn’t mesh well with the White House. They reasoned that Carter had already tried to tame inflation by appointing “inflation czars,” implementing fiscal austerity, and appealing to citizens to increase their conservation efforts.

But inflation was still rampant, and Carter wanted to meet Volcker. “Paul is a tall fellow, maybe six foot, seven inches,” Carter told me. “He came striding into the Oval Office and then he sprawled out over the couch. During the interview, I thought he was going to fall asleep,” he laughed. “I didn’t ask him whether he was a Republican or Democrat. I wanted to know whether he was going to do the right thing for the country. I wanted to do something about inflation.” Volcker left the meeting thinking he had no chance of getting the job, “Well, I blew it,” he told friends. But the next day, Carter phoned him and offered the job.

At his first press conference, Volcker sent a powerful message, albeit using Fedspeak: “If we are going to progress and prosper, we need a sense of confidence that we are moving toward price stability at home.” The country was experiencing an annualized inflation rate of 13%, and the only way to bring about price stability was to raise rates dramatically, and that’s just what he did. During his tenure, Volcker raised the federal funds target from about 11% to 20%. Consequently, inflation fell from over 14% in 1980 to less than 3% in 1983. But the precipitous decline was too late for Carter, who had lost to Ronald Reagan in the election of 1980.

According to one post-election poll, 73% of people said that the economy was the nation’s largest problem. Certainly, Volcker’s policies were opposed by Carter’s political operatives and other top economic advisers, as his measures helped push the country into recession in 1980, and the unemployment rate jumped from 6% in August 1979, the month of Volcker’s appointment, to 7.8% in 1980 (and peaked at 10.8% in 1982). But Carter knew that the country needed Volcker’s tough medicine, even if it didn’t win him any friends politically.

“It was a tough decision,” said Carter. “But the right one,” he told me.

For those who lament Jimmy Carter’s economic legacy, remember how he elevated the right man at the right moment – a man who implemented monetary policies that helped get the economy on the right path.