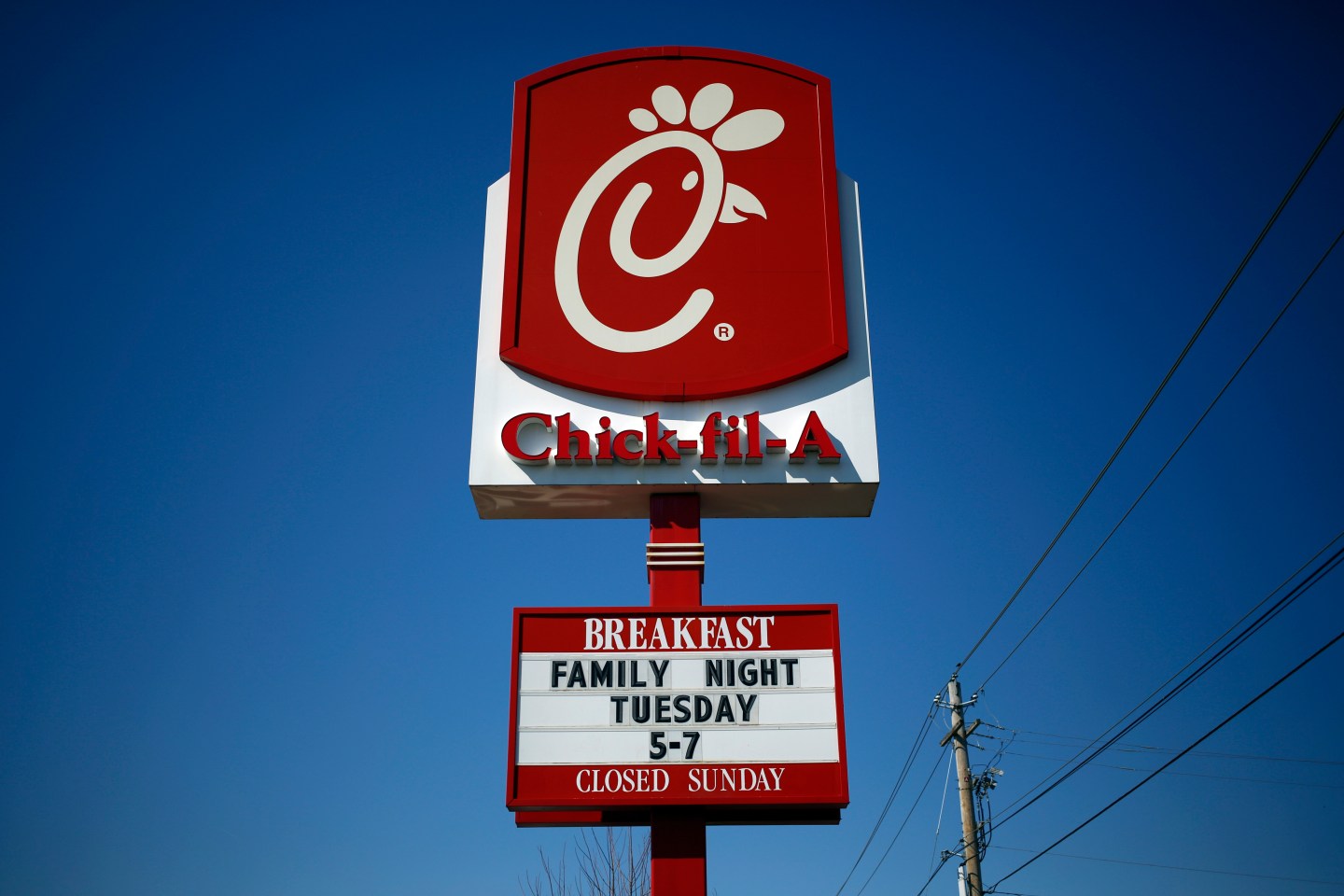 Signage stands outside a Chick-fil-A Inc. restaurant in Bowling Green, Kentucky, U.S., on Tuesday, Mar. 25, 2014. The U.S. economy grew more rapidly in the fourth quarter than previously estimated as consumer spending climbed by the most in three years, showing the expansion had momentum heading into this years harsh winter. Photographer: Luke Sharrett/Bloomberg via Getty Images
Photograph by Bloomberg via Getty Images

Many modern businesses own little inventory or real estate. They’re composed mostly of people, who use their skills to accomplish something bigger together than they could on their own. That makes attracting great employees critical, and yet in a world of layoffs and stagnant salaries, a 2014 Gallup poll found that 68.5 percent of employees are disengaged — presumably doing what is required, but expending little energy thinking up new ideas and solutions.

So a few organizations have proposed a different mindset. What happens if you declare that you and your colleagues are not just a team, but a family? Family “is a place of unconditional love,” says Bob Chapman, CEO of Barry-Wehmiller, a privately held equipment and engineering consulting company based in St. Louis, with annual revenue of about $2.4 billion, and author of the new book Everybody Matters: The Extraordinary Power of Caring for Your People Like Family. “The one place you ought to feel safe and valued is your family.” Just as with parenting, “leadership is the stewardship of the lives entrusted to you.”

In practical terms, that means heavy investments in human capital and no layoffs. It’s an appealing idea, and one that’s distinguished a few high-performing businesses, though it has its flaws as well.

Chapman’s premise is that the popular model of at-will employment — when companies and employees don’t make long-term commitments to each other — misreads human psychology. When times are tight, layoffs seem like the right response. You can choose who to let go, and since every company has low performers, it’s best to hand them pink slips. But “what you can’t calculate is the collateral damage that does to people who are friends” of theirs, says Chapman. People spend a lot of time at work, and get to know their co-workers as well as their family members. Consequently, “they don’t feel safe anymore because they worry they’re next.” When people are worried about protecting their jobs, they hunker down. They aren’t innovative. But when people feel safe and valued, “they find gifts they didn’t even know they had.”

Barry-Wehmiller, which has about 11,000 employees worldwide, tested this philosophy during the 2008-2009 economic downturn. When customers canceled several large orders, Chapman knew he had to do something. However, he realized that “if we let people go, it’s going to be devastating for them;” there were no other jobs to be had. So the company asked everyone to take a month’s furlough instead. The reaction was positive, especially when framed that it was “not to make the company more profitable. It’s to help their friends keep their jobs.” People offered to take colleagues’ furloughs if individual employees couldn’t afford the pay cut. Since the company didn’t lose experienced people to layoffs, it was able to ramp up quickly after the recession. The “family” mindset also turned out to be attractive to job applicants; Chapman reports that his company has no trouble filling positions.

Chick-fil-A, the $5.8 billion restaurant chain with approximately 1800 locations, also uses the word family a lot. “We truly care about each other,” says Dee Ann Turner, Chick-fil-A’s vice president of corporate talent and author of the new book It’s My Pleasure: The Impact of Extraordinary Talent and a Compelling Culture. “As an organization, we care about our employees personally.” For example, “If I’m overloaded with bags — which is almost every day — I get asked several times on the way, ‘can I help you carry that?’” Chick-fil-A has not had lay-offs in its 69-year history, and has a 95 percent retention rate among corporate staff and franchisees. Even young headquarters hires who might be skeptical of the concept are encouraged to consider a lifelong career as part of the family: “You can have a second career, a third career, within the same organization,” says Turner.

Like Chapman, Turner says this is more practical than it might sound. If managers believe that layoffs and terminations are an easy option, they can become lazy about the hiring process. At Chick-fil-A, Turner believes that “great decisions on the front end save you a lot of time and expense on the back end.” The company also hires fewer people than comparable businesses might–there are about 1,400 corporate employees; the franchisees employ about 80,000–partly to keep profits high enough to treat people well. Founder Truett Cathy “always tried to keep a lean staff,” says Turner. “His biggest fear around people is he never wanted to lay someone off because of not managing the business well.”

In a recent poll by Working Mother, 66 percent of respondents listed job security as a top priority in choosing a place to work. A company that doesn’t consider layoffs can wind up becoming an employer of choice.

Yet the “family” metaphor has some flaws. First there’s this: “Not all families are functional,” says Deb Best, an HR consultant. Many people have baggage from unmet childhood emotional needs, and expecting work to fill those voids is asking for trouble. “It creates too much emotional white noise. Work is already fraught with enough melodrama,” she says.

Second, a business has a mission to turn a profit; a family does not. Even if you’re not laying off people, business decisions can undermine the family dynamic. Best once encountered a department with a family vibe that lasted until one colleague was promoted over another. When the new boss tried to give instruction to a former team mate, all hell broke loose. “The boundaries get muddy or they completely disappear,” she says. Too often with people, the family metaphor “leaves too much room for them to forget they’re adults.”

And finally, even the best-managed company likely won’t endure like family. The average lifespan of a company in the S&P 500 has fallen from about 60 years in the 1950s to under 20 years today. That’s barely enough time to see a child off to college. Promising to always take care of your people “is a way of disempowering employees,” says Best. In the new economy, everyone needs to be entrepreneurial. That’s a lesson Best and her husband, who are both self-employed, are trying to teach their son. “We want him to know he can be self-determined, that he’s the source of his money,” she says. “When you make it family, then it’s daddy or mommy giving you an allowance.”