The clown show at VW 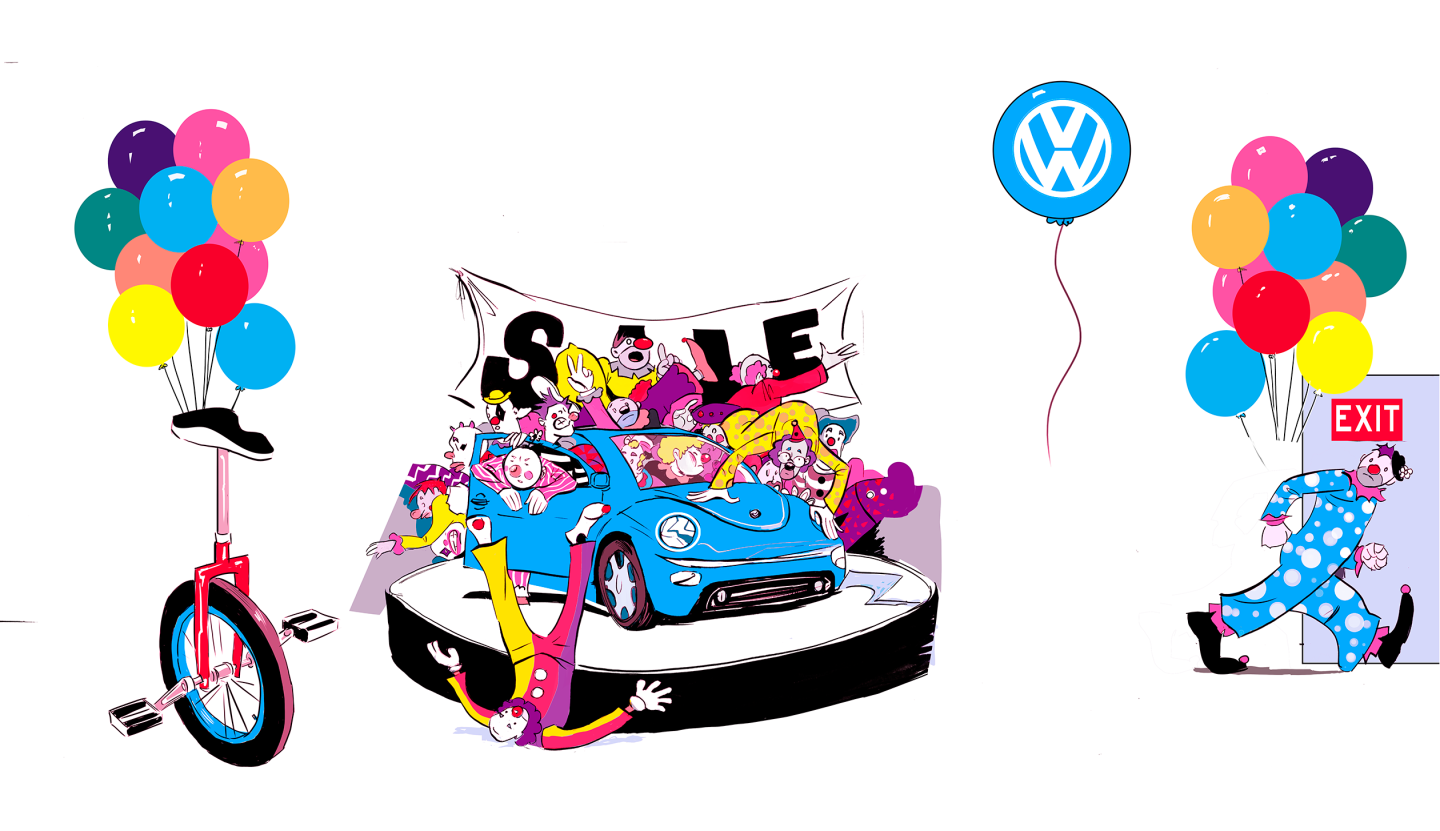 So you ask yourself, What in the world were those guys at Volkswagen allegedly thinking? I’m using the word “allegedly” here not about what they allegedly did but about their thinking, which was most certainly alleged. These menschen structured an ambitious effort to jigger the hardware and software of millions of vehicles over a period of seven model years in order to be able to claim they were greener and more efficient than they were. Plotting? Sure. Executing their nefarious scheme with precision and technological excellence? Jawohl. But thinking as you or I would use the word? Nein. This goes way beyond that.

Why does this kind of thing happen? When you see dishonesty and deceit pursued as a business strategy, you can’t simply say that the people involved are just a bunch of crooks. That’s too simple. So let’s look at the possibilities.

They’re a bunch of clowns. Well, possibly. But if so, they’re very serious clowns. And there are a lot of them pouring out of that VW Beetle.

They didn’t know about it. I’m going to dismiss this one right now. Corporate citizens don’t implement a massive plan to break significant laws without knowledge in a chain of command. Particularly German citizens.

They didn’t know it was wrong. Huh? They were offering the world vehicles that at times exceeded ecologically responsible levels of emissions by 40x. You don’t have to be a polar bear floating out to sea on a tiny ice floe to know there’s something wrong with that.

They don’t care about polar bears. Let’s be kind. There must be individual VW employees who care about individual polar bears, but as a group it’s possible their concern for endangered species being wiped out by carbon gasses was extinguished and replaced by other emotions. Like greed.

Greed? Really? Sometimes the simplest explanations are the most credible. Still, this doesn’t feel like enough. They had to know this would cost them at some point down the road, unless …

They thought everybody else was stupid. I’ll buy that. Corporate arrogance is not unheard of, nor is the belief that one’s intelligence is superior to that of others.

They did it because they could. Now we’re getting somewhere. Mad scientists in white coats don’t build monsters only in movies. Did we really need a hydrogen bomb? How about a method of editing genes to create a new species of übermenschen? They’re doing that today, although not at VW.

They were actually proud of the engineering skill it took to pull it off. Of course they were. I guarantee you champagne corks were flying.

They’re in a desperate fight for market domination that ruptured their normal sense of right and wrong. Yep. The company was facing rules and regulations that might have interrupted their ambitious drive to be No. 1 in the world. With the proper senior officers in charge, virtually any actions would be justified by the greater good that was being achieved.

So they’re operating on an ethical framework in which what they’re doing is actually right, in a way? Yes. That’s generally what people tell themselves when they ignore reports saying their oil rig will explode soon, or jump a turnstile, or hawk a security their firm is betting heavily against. Nobody really ever thinks, I’m going to do something wrong now. There’s always a rationale. Sometimes a divine one.

Maybe they thought they could get away with it forever? Yeah. I bet they did.

And they figured they would be able to handle it if the thing blew up. Of course. People always tell themselves that.

Still, if you add up all these things, there is a moment when the guys in charge look at one another and say, “Achtung, baby,” and pass the good news down the line. And that defining moment is what separates those who cheat, lie, and steal from those who don’t.

So they’re crooks, right? I guess so. Now tell me something we didn’t know.