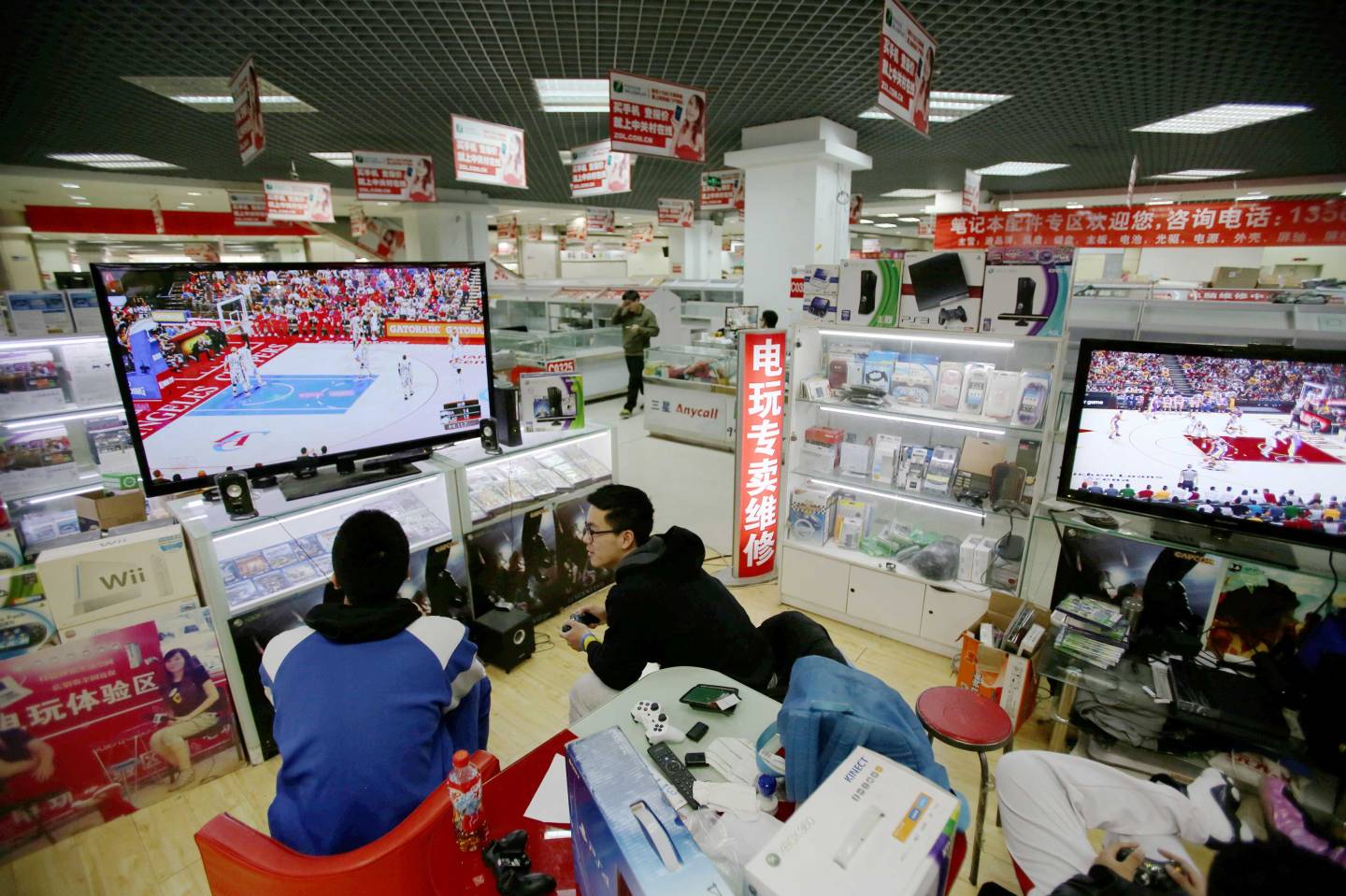 Young Chinese students play electronic games at a stall in an empty electronics mall in Zhongguancun, Beijing, China, 22 January 2015. Hunched over the counter of his tiny, gadget filled stall in Beijing's vast Hailong Electronics City, Wang Ning bemoans a week without a single sale. "It's dying," says Wang, shaking his head as he looks out at abandoned stores and torn promotional posters in what was once the busiest market in the Zhongguancun district, known as China's silicon valley. "There are more sales staff than customers around here. Everyone buys online now." The six football-field-sized floors are dotted with shuttered shops, victims of the rise of Internet-based businesses like Jack Ma's Alibaba Group Holding Ltd. and billionaire Richard Qiangdong Liu's JD.com, which started out in Zhongguancun almost two decades ago. The online revolution promises to boost productivity and could create 46 million new jobs in China by 2025, many of them higher-skilled, according to a report by New York-based McKinsey & Co. in July. The losers will be as many as 31 million traditional roles, the equivalent of the entire employed population in Britain. While such creative destruction is a global phenomenon, its speed and scale in China is unparalleled, said Cao Lei, director of the China E-Commerce Research Center, a private research agency based in Hangzhou, the hometown of Alibaba. "The Internet helps improve productivity and efficiency, but it can be quite painful for traditional businesses,” Cao said. "Bookstores fail first, then clothing chains, then consumer electronics stores, then air-ticket booking offices, and in the future, bank branches and other traditional services facilities may fail."
Photograph by Song jiaru — Imaginechina/AP

The government rarely shares information about the meeting until weeks or months later. But the immediate signs point to a recognition by the government that China is in danger of growing old before it gets rich.

The country’s National Bureau of Statistics has said that by 2030, one in four Chinese will be over 60. That’s a breaking point for many countries that rely on young labor for growth, like China still does.

More information will likely leak out of the main Party apparatus in the next few weeks. For now, this is the biggest decision out of China to break with its past family planning policies since they were enacted in 1980.