This new tool will make astronauts’ lives a lot easier 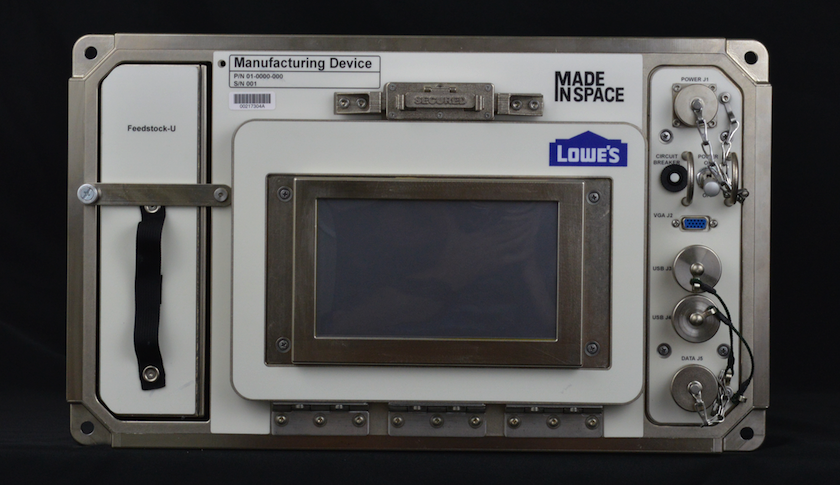 The Lowe's and Made in Space 3D printer
Photograph Courtesy Lowe's

There’s a great scene in Apollo 13 where a group of NASA engineers are dumping out boxes of materials that can be found on the spacecraft, which is in big trouble. They have to figure out how to fix a critical filter problem with only the objects that can be found on board—or the astronauts will die in space. Ed Harris, who portrayed NASA’s flight director on Earth summed up their plight when he said, “Well, I suggest you gentlemen invent a way to put a square peg in a round hole. Rapidly.”

A 3D printer could have solved Apollo 13’s pivotal problem in just a few hours.

On Thursday outer space manufacturer Made in Space and home-improvement retailer Lowe’s (LOW) said they will launch the first commercial 3D printer into space. The printer, set to be delivered at some point between now and next March, will become a permanent manufacturing fixture on the International Space Station (ISS).

“Rather than launch things on rockets, you send a digital file and print things out,” says Jason Dunn, chief technology officer and co-founder of Made in Space, which was founded in 2010 and contracted by NASA to design and build the 3D printer for the ISS.

Here’s how it works: An astronaut on the ISS will call down to Earth and request a part. Let’s say a ratchet goes missing and needs to be replaced. A design team in California will sketch a 3D model, print it, and get NASA approval. The agency’s team on Earth will then sign off, and the ratchet will be printed in space. That process would take about two hours, though for smaller, simpler parts, it could take even less time.

For Lowe’s, the partnership makes as much sense on the ground as it does in orbit.

“Problems that happen in space also happen on Earth—if you solve it in space, you can definitely solve it on Earth,” says Kyle Nel, executive director of Lowe’s Innovation Labs. He says the retailer’s ultimate goal is to learn more about 3D printing from the partnership with Made in Space and use it in other parts of Lowe’s business.

The retailer has already tinkered with 3D printing at its stores. For the last six months, a 3D printer has been tested at a Lowe’s owned Orchard Supply Hardware in California. Customers have come into the store to custom print doorknobs, broken antique parts, and even to print copies of vintage toys so their kids could play with them without the risk of destroying the initial item. Lowe’s hadn’t anticipated so many different kinds of usage, and the retailer says it’s still in the very early stages of finding ways to make 3D printing work in a big-box retail setting.