These 5 hip airlines have stylish amenities 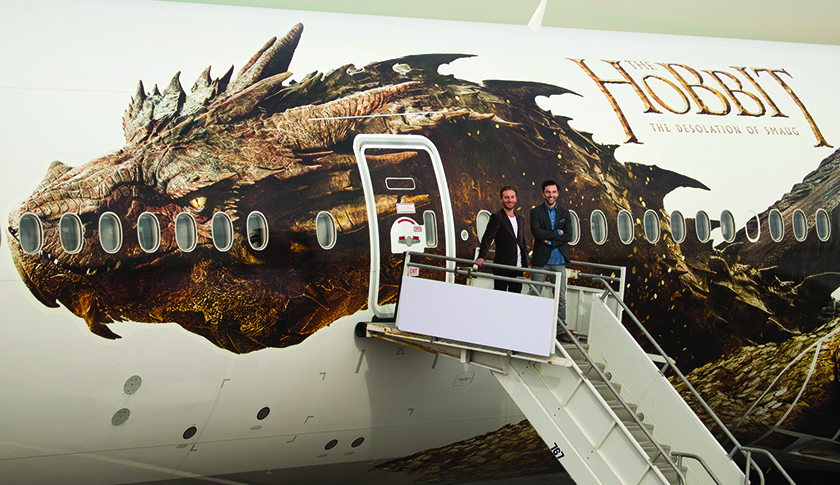 One of the biggest stories in aviation over the past decade has to be the consolidation of airlines, but behind the scenes there’s an inter-industry dalliance between airlines and name-brand entities in food, fashion and design. On both sides the companies seek to elevate their profiles and improve sales. This is what prompts an airline like Emirates to sponsor sports teams and Air New Zealand to paint Lord of the Rings movie scenes on its airplanes.

“The SVP of brand marketing identifies a set of core brand values as well as a target customer he or she wants to attract,” explains Rick Garlick, an analyst with the hospitality and travel group J. D. Power and Associates. For Delta Air Lines, that meant going after the customers of Westin Hotels by installing the hotel’s Heavenly bedding in Delta’s Business Elite cabin. And travelers who appreciate Tumi luggage and accessories should be pleased to see the company has designed the amenity kits on Delta’s airplanes. Recently, New York’s Danny Meyer of Union Square Hospitality signed on to create the menu on the airline’s New York to London flights.

“They’re trying to buy some differentiation, some panache to give their own offer,” says Landor Associates brand strategist Allen Adamson. When it is mattresses or in-flight meals, Adamson thinks the effort is worthwhile, because those are areas where an airline cannot be expected to have in-house expertise. But, he cautions, it is a mistake for an airline to veer too far from the primary business of getting people safely and comfortably from A to B, because that’s all the passenger really wants or is willing to pay for.

But is it? Some airline executives heavily involved in the designer dating game disagree.

Taiwan’s EVA Air is not the highest-profile airline, but the Hello Kitty characters painted on six of its wide-body jets are universal superstars. Whether that’s relevant to EVA’s core mission isn’t the point, according to company president Austin Cheng. “Loads on routes we serve with them are a steady 80 to 90 percent.” Revenue from onboard sales of items like airplane models in the Hello Kitty livery and other tchotchkes are also higher on the Hello Kitty–branded flights, he adds. Cheng would not disclose how much EVA is paying for the right to offer the cheerful kitten on everything from planes to butter pats. But privately I’ve heard airline executives groan about the price.

A few airlines eschew links with outside brands at present, among them, Texas-based Southwest Airlines and Canada’s WestJet. It is no coincidence that these are both no-frills companies that concentrate on budget-conscious travelers. They also employ marketing strategies that are focused on brand identities of their own creation.

“The brand is our people,” and the focus is on customer service, says Chris Mainz, a spokesman for Southwest. “We’ve been admired and studied, and people and other companies and organizations call to ask, ‘How do you guys do it?’” The airline that once was known for dressing its flight attendants in hot pants is unlikely to join carriers like Qantas, All Nippon Airways and Virgin in paying top dollar for designer crew uniforms. “That’s not what we hang our hat on,” Mainz says.

But for those airlines that do want to tie themselves to the stellar brands of outsiders, their plans can be quite diverse—related to individual geography, culture or the pursuit of a particular market niche. When an airline pairing seems mystifying, I remember my mother-in-law, who was fond of saying of the odd couples she encountered, “There’s a lid for every pot.” And so it is in the world of airline partnerships.

Marimekko tableware on Finnair.Courtesy of Finnair

The goal: Leverage the airline’s Scandinavian identity in Asia by reinvigorating its long-term relationship with Finnish designer Marimekko.

What it looks like: Nothing says Finland to outsiders like Marimekko, a 62-year-old fashion design company with stores around the world. But the graphic prints—some evocative of the Scandinavian countryside—are particularly popular in Asia, where more than 50 percent of Finnair’s revenue is generated. There are 23 Marimekko stores in Japan as well as branches in China and Hong Kong.

The goal: Present regionally customized, chef-driven menus from renowned restaurateurs known in their communities for their food and attention to service.

What it looks like: The chefs and sommeliers chosen by Delta are developing route-specific offerings and will provide continuing oversight of the onboard experience, says Tim Mapes, the airline’s senior vice president of marketing. “The reason they have these reputations is because of their quality.”

With a nod to the fact that good can be subjective and delicious is often rooted in regional culture, Delta’s relationship with New York’s famed restaurateur Danny Meyer is one of many partnerships the airline is creating. Quality food and drink is one aspect; taking advantage of the goodwill generated when a large corporation focuses on a region and gives a thumbs-up to a local celebrity—as it’s doing with New York’s Meyer—is another benefit. Delta has been engaged in an aggressive and successful effort to gain market share in New York, and its relationship with Meyer has raised its local profile.

The goal: Make flying fun by embracing the cheerful personality of a globally recognized cartoon kitty that can make “even tired, stressed business travelers smile,” according to EVA president Austin Cheng.

What it looks like: EVA Air purchased from Japan’s Sanrio Company the right to adorn six wide-body jets with Hello Kitty characters and create a special airport check-in at Taiwan’s Taoyuan International Airport. On board the planes, Hello Kitty designs turn up everywhere from the in-flight meal tray to the embossed Hello Kitty toilet paper and hand soap. Flight attendants sport aprons adorned with the family of characters and adopt a similarly effervescent manner with customers of all ages. Licensed merchandise is also sold on board the aircraft.

The goal: Re-establish the airline’s superior reputation by partnering with an internationally famous French chef in Air France’s La Première lounge
in Paris.

What it looks like: The airport experience offered to the airline’s most valued customers looks nothing like what most other travelers get. From the moment of arrival at the terminal until they are ensconced in cushy and spacious leather seats, first-class flyers on Air France are coddled at Charles de Gaulle. It is an attempt to both provide a level of service commensurate with a ticket many times more costly than an economy fare as well as reinforce a historic identity.

“First class is part of our DNA; Air France without first class would not be Air France,” says Bruno Matheu, chief officer for long-haul passengers. Through its partnership with Alain Ducasse, Air France can brag that meals in the lounge restaurant are the creations of the same chef who presides over Le Jules Verne in the Eiffel Tower.

At the same time, the airline is careful not to discount its own 70-year history. “We have to find the right balance between promoting the services provided by Alain Ducasse and remaining Air France,” Matheu says. Toward that end, waiters in the on-demand La Première restaurant wear the historic uniforms of airline stewards in days gone by. The entire experience, Matheu says, is unique.

The goal: Create a modern uniform for airline employees that reflects Qantas’ more visible position as a global airline.

What it looks like: Even the best styles begin to look dated after a while, and with the 10-year-old boomerang prints of Australia’s Peter Morrissey, change was overdue.

“Every Qantas uniform tells the story of its times,” says airline spokeswoman Courtney Treak of the 10 times the airline flight crew uniform has been changed since 1948. From the white and navy military-style suits worn in the ’50s to the Emilio Pucci flower-power polyesters of the ’70s, Qantas has incorporated its own national culture while reaching out to some well-known international designers.

“This edition of the Qantas uniform speaks of Australian style on the global stage,” Treak says of the company’s selection of Martin Grant, a down under designer based in France. Grant’s geometric-inspired, classic garments have been worn by Cate Blanchett and Lauren Hutton. The uniform for ground and air crews incorporates the red kangaroo Qantas logo through its use of triangular panels on the garments.

Uniforms as a branding enterprise can be a little tricky, since they go on a person, not a tray or a tail. Qantas had a panel of 12 employee representatives judge the candidate designs for functionality and durability. It was up to the airline to determine whether the look was “suitable for a premium airline operating across Australia and around the world.”

Christine Negroni is a freelance aviation and travel writer whose work has appeared in The New York Times, the International Herald Tribune, Airways, and other publications. This Executive Travel story first appeared in the Oct. 6, 2014 issue of Fortune with the headline “Flight bling.”