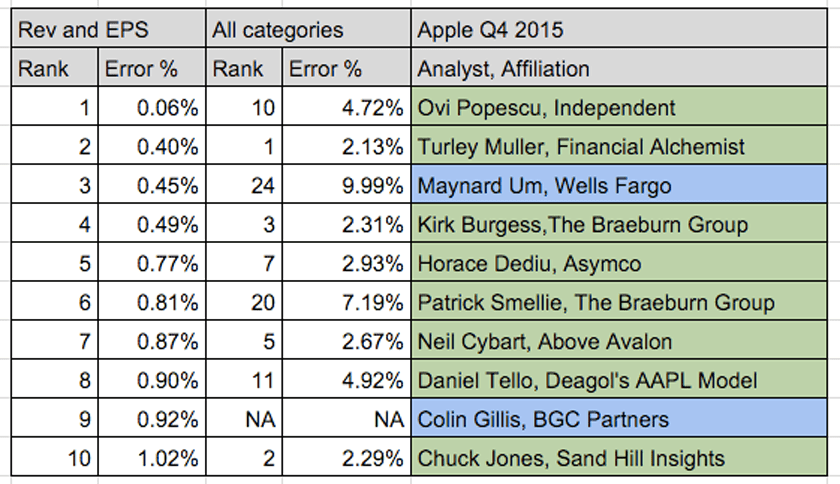 If the Street’s expectations for Apple got ahead of reality in the June quarter, fear, uncertainty and doubt ruled last quarter. And that’s the kind of fog in which the amateur Apple analysts—immune to Wall Street’s darkest thoughts about the company’s prospects in the post-Jobs era—tend to shine.

And so it was that the independents—bloggers, podcasters and assorted retail investors—bested the pros in the Q4 2015 edition of Fortune’s Apple Earnings Smackdown, now in its eighth year.

The rules are simple. Each participant submits estimates for key Apple reporting categories—top and bottom lines, unit sales, gross margin, etc.—and are ranked numerically after the actual results are announced.

Of the 10 best analysts, judged by the accuracy of their estimates for revenue and earnings-per-share, eight were independents.

The professionals did somewhat better when ranked by all the categories (see color-coded spreadsheet here), but still trailed badly.

The crowdsourcing site Estimize.com, which beat our panel in the June quarter, didn’t do quite as well this time around. Drawing on a larger pool of nearly 1,200 independents, its consensus (earnings of $1.92 on sales of $51.35 billion) missed the actual bottom line ($1.96) by 4 cents.

—To independent Ovi Popescu and Financial Alchemist’s Turley Muller who nailed Apple’s EPS to the penny, Muller for the second quarter in a row. Muller was also No. 1 in the all-categories ranking.

—To Asymco’s Horace Dediu and Sand Hill Insights’ Chuck Jones for nailing the top line (revenues). Jones was No. 2 in all categories.

—To Baird’s William Power and the Braeburn Group‘s Pat Smellie for the best and second-best estimates on iPhone unit sales, not an easy number to predict this last quarter.

And a wag of the finger…

—At RBC Capital’s Amit Daryanani. Not only was he part of a trio (along with Baird’s Power and Jefferies’ Sundeep Bajikar) who submitted the worst bottom-line estimate ($1.83, 6% below Apple’s actual result), but he was second only to “Beltway” Greg Boyd for the worst revenue estimate. Boyd overshot by $2.2 billion. Daryanani was under by $1.4 billion.

Below: The full list of analysts, sorted by the top and bottom line, with the pros in blue and the amateurs in green. The all-categories ranking was complicated by the fact that some analysts didn’t submit unit sales estimates and a few seemed not to understand that Apple is hiding Watch and iPod revenue in the category called “Other products.”