This 3D laser printer startup has already made $19 million 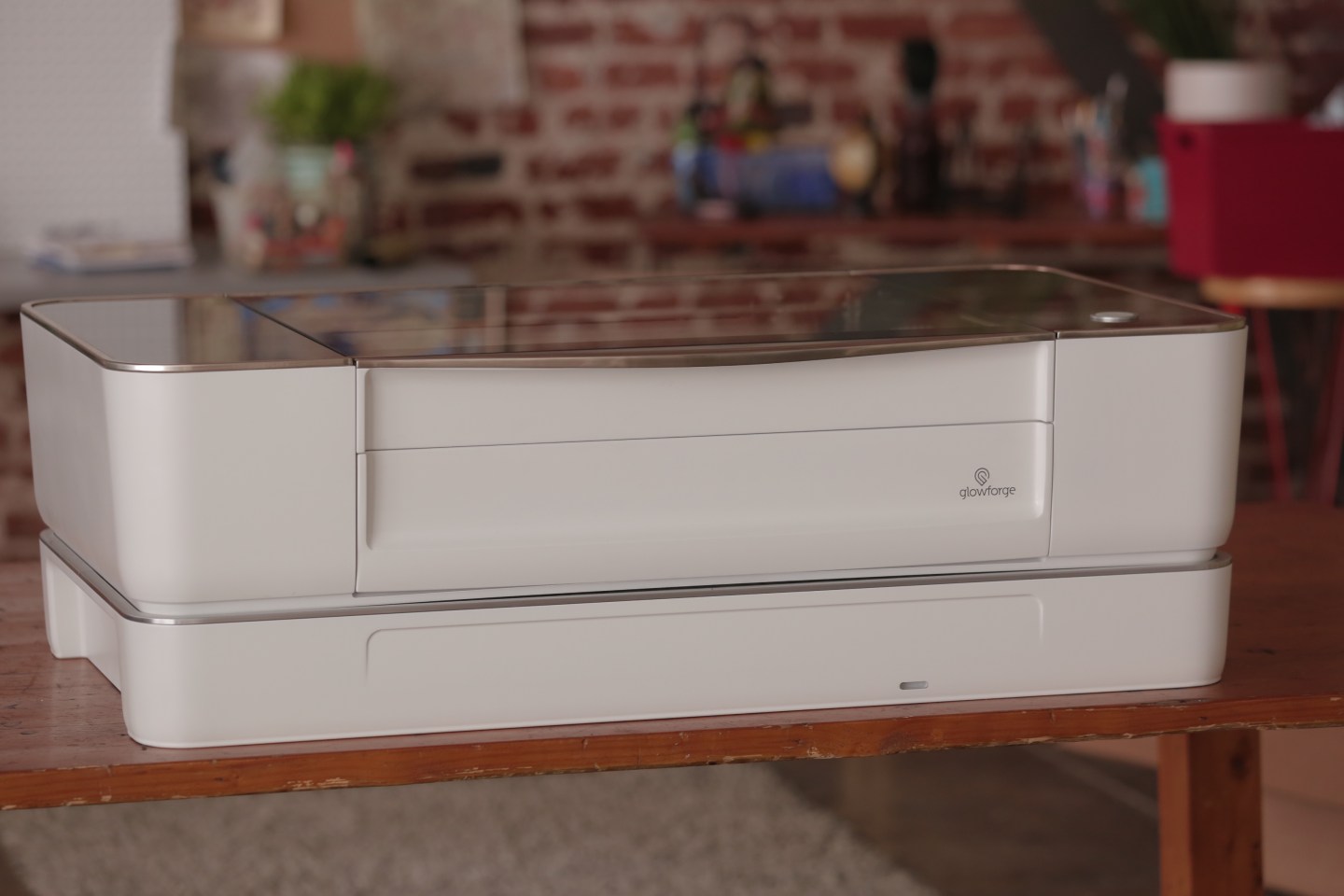 To call the Glowforge a 3D laser printer isn’t quite right. But the liberties the machine’s three co-founders have taken with the name are really more for the sake of having an intelligible way to describe a working laser cutter that’s the size of a desktop yet can perform the functions of the hulking, 700-plus pounds, $10,000-plus laser CNC cutter-engravers that are found in makerspaces and garages.

“I had a traditional laser cutter in my garage, and I would show it to people all the time,” says co-founder Dan Shapiro. “They would say, ‘Your laser printer is amazing.’ I’d say, ‘That’s not a laser printer.’ … At some point I learned the business advice that you’re supposed to be learning from your customers rather than lecturing to them.”

The machine Shapiro and co-founders Tony Wright and Mark Gosselin have created from their headquarters in downtown Seattle is really a laser cutter. It’s a subtractive manufacturing tool, as opposed to the additive nature of 3D printers.

But considering the buzz flying around the Glowforge, one would think the trio had sparked a Marc Andreessen tweetstorm. Big-name investors, like MakerBot founder Bre Pettis and MakerBot investors Foundry Group, have poured $9 million into the development of the machine. In under a month, the Glowforge has surpassed $19 million in pre-orders. On the Glowforge online community forum, one person boasts about how he sold his “vintage convertible” in order to buy his Glowforge. Did we mention the machines don’t start shipping until December?

Glowforge’s technology is the same as far as cutting and engraving goes. Natural hardwoods, acrylic, leather, paper—virtually anything one could cut with an industrial-size laser cutter can be cut with the Glowforge. The machine’s software runs on a web browser, which means an Internet connection will be necessary to use it, but what Shapiro describes sounds like a truly plug-and-play machine.

Two onboard cameras are able to measure the thickness of the material placed inside and perform 3D scans of what’s being cut. The design can then be stretched, moved around, or duplicated in the cloud. And then you click print. The onboard cameras auto-focus, which means whatever is being cut doesn’t need to be aligned like in a traditional laser cutter.

“That’s the downside of laser cutters right now: You have to manually focus these things. Theirs auto-focuses no matter what, which allows them to cut on a curved surface. That I’ve never seen,” says Brook Drumm, founder of Printrbot, the desktop 3D-printer manufacturer.

Other desktop laser cutters exist, but the software is lacking. Some questions about the Glowforge still remain. As with any laser cutter, ventilation is required, something accomplished in one of two ways: Set up the Glowforge by a window, and hang the included 4-inch dryer hose outside. Or buy a Glowforge with the additional $500 air filter, which snaps to the machine’s underbelly. How well that air filter performs needs to be tested by consumers.

The pre-order prices for the Glowforge—three versions are available—are marked down by 50%. Buying a Glowforge at the standard retail price will cost $4,000.

“The price point that they’ve hit is awesome,” says Andrew Coy, the executive director of the Digital Harbor Foundation youth makerspace in Baltimore, but adds that price still “needs to go lower for more folks to benefit.”

Ultimately, where Glowforge seems to represent an innovative leap is in both ease of use and the available software, two areas that would seemingly make the Glowforge a no-brainer purchase for Etsy craft people, designers, and small artisans.

In other words, Shapiro’s argument goes like this: Line up everything you could possible make out of plastic with a desktop 3D printer. Then line up everything you could make out of multiple types of raw materials with the Glowforge. Which is more relevant to your everyday life? A plastic vase or a new leather wallet, which is something Shapiro used the Glowforge to create by first cutting raw strips of leather, carving the holes into the edges of each strip, and then saddle-stitching the leather strips together.

“The thing that the laser does is it gives you your choice of materials, and this just can not be overstated,” Shapiro says. “There’s only so many things in your life that you want made out of plastic.”