Yahoo hopes for ‘historic event’ with its NFL livestream 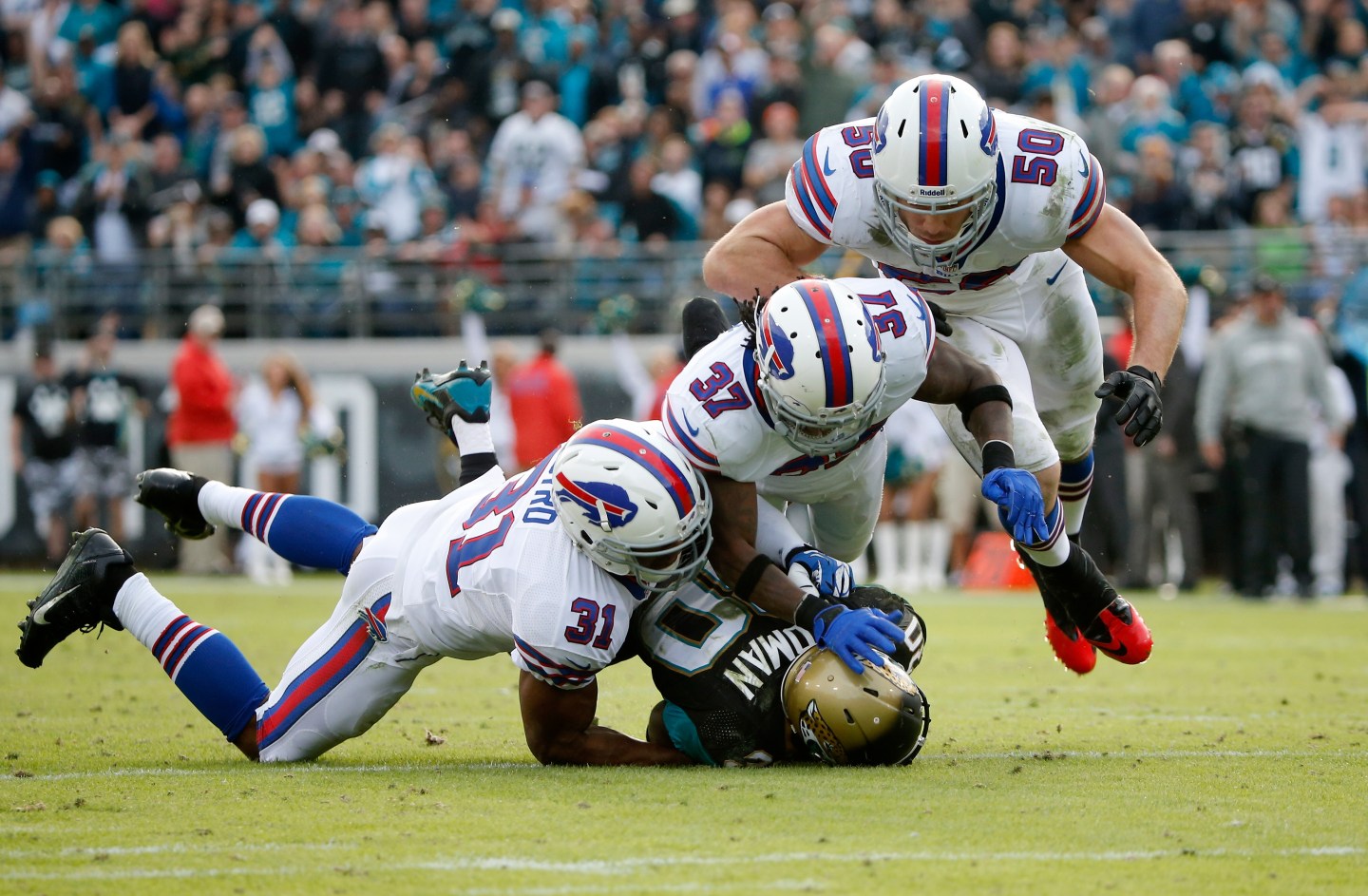 JACKSONVILLE, FL - DECEMBER 15: Jordan Todman #30 of the Jacksonville Jaguars is tackled by Jairus Byrd #31, Nickell Robey #37, and Kiko Alonso #50 of the Buffalo Bills during the game at EverBank Field on December 15, 2013 in Jacksonville, Florida. (Photo by Sam Greenwood/Getty Images)
Photograph by Sam Greenwood — Getty Images

Are you ready for some NFL football—at 9:30 on a Sunday morning?

Yahoo is set to exclusively air a game between the Jacksonville Jaguars and Buffalo Bills on Sunday, October 25, live from London at 2:30 p.m. local time. (That’s 6:30 a.m. Pacific Time.) The game will be available on an extensive list of platforms, none of which is cable: a dedicated Yahoo webpage; all of Yahoo’s mobile apps; Tumblr; and on various connected TV devices: Amazon Fire, Apple TV, Chromecast, Roku, Sony, TiVo, Vizio, and Xbox 360 and Xbox One.

This is the first time the NFL has handed the rights to one of its games to a technology platform. The game will not be available on broadcast television at all, except for in the local markets of Buffalo, New York, and Jacksonville, Fla. It’s a sign that the league is at last attempting to cater to cord-cutters by offering ways to watch games without cable.

The NFL’s digital chief, Brian Rolapp, hinted at deals like this in an extensive interview last year with Fortune, saying that he and others at the league have closely examined Netflix, Spotify, Pandora, and HBO Go for inspiration in their digital efforts.

All of this season’s NFL games can be digitally streamed in some way, but in every cases but this game, it requires spending money for a cable or digital subscription. (For more, see our comprehensive guide to streaming the NFL.)

This digital gambit doesn’t just mark a shift for the NFL, it is also a major opportunity for Yahoo—if it goes well. The company (YHOO) reportedly shelled out $20 million for the rights to offer this game, and promised advertisers at least 3.5 million U.S. streams. Its coverage begins at 8 a.m. ET with an hour of fantasy football discussion, including segments with Yahoo anchor Katie Couric and an interview with Buffalo Bills Hall of Fame quarterback Jim Kelly. Fortune spoke with Yahoo’s SVP of mobile and emerging products Adam Cahan, who oversaw the effort.

Fortune: How did this deal come about, and what arguments did Yahoo make to the NFL to compete with other providers?

Adam Cahan: The NFL was looking at different ways of delivering games to audiences, specifically in the digital area, and they also wanted to reach a global audience. They did look at a number of different capable providers, and I think what it boiled down to was the audience reach, and that we have an endemic user base of 1 billion people. We have a tremendous franchise with Yahoo Sports, which has a strong reach, and then our advertiser relationships, and our tech, which was evaluated on ubiquity of reach and also the quality of the experience we can deliver.

This is a big experiment.

We aren’t using the word “experiment.” From our perspective, we see it as a trial. A trial for us means it really is about a long-term, broader partnership to see what else we can do together.

What else can you do together?

Well, if you start from an industry perspective, there really is a dramatic platform shift coming. Cable providers are losing subscribers for the first time, and what’s underlining that is the way we are consuming media. Millennials are three times more likely to watch video online than in other mediums, and the area where they consume the most video is no longer even TV. And this is the first time we’re seeing that. I mean, to address my own behavior, I’m not watching a lot of TV anymore.

The NFL and live sports has been one of those things that always leads the platform shift, so if you think about people moving from cable to satellite, and now satellite to digital, it’s the NFL and sports that start to define the shift.

What we can do is, in terms of audience, we have a billion users across all of our platforms. And then for advertisers, we have the ability to bring true premium advertisers who want access to this type of experience. So after the game, we’re going to be talking a lot about the quality and scale of the experience. This game will be free and live to a global audience. So it’s also about the globalization of the league.

How will Yahoo measure success from this trial?

Success for us will be measured by consumer reach and scale—what kind of audience can we deliver, quality of the technical experience, and advertiser satisfaction.

Do you think more people will watch than tune in for a normal Sunday NFL game?

Our hope is that we can rival broadcast audiences.

Do you have any specific prediction on which platform will be most popular?

From sheer reach, it’ll probably be a combination of desktop and then, ultimately, mobile. But it will have a lot to do with time of day and where people will be. It will probably start on desktop and then move to a mobile device. But we may be surprised! Maybe everyone will want to do it as a big-screen experience using their TV, we don’t know.

It’s sort of a tough proposition for people in the U.S., though, right? Nine-thirty in the morning for the East Coast and 6:30 for the West Coast, when a Sunday game typically starts at 1 p.m. ET.

Sure, but football games last a few hours.

Will Yahoo and the NFL release the numbers on exactly how many people watch the game, and on which platforms?

Data will come out—I can’t say exactly what data yet—but not just actual viewership. We’ll have data on screens, demographic, and then, within 30, 60, 90 days after the event, an advertiser will have the opportunity to re-target someone who watched. With advertisers we will certainly provide them with a granularity of data, but for the public we will release more general stats.

Are you guys doing anything at Yahoo corporate headquarters in Sunnyvale to observe this?

Oh, we’ll all be together on Sunday, at the office, watching the game but also making sure the technical part works. We’re treating this as a historic event.

Do you wish you guys had gotten a better game? Jaguars-Bills isn’t exactly a thrilling matchup…

We think it’ll be a great game.