The NFL has a plan to recruit more female refs. Will it work? 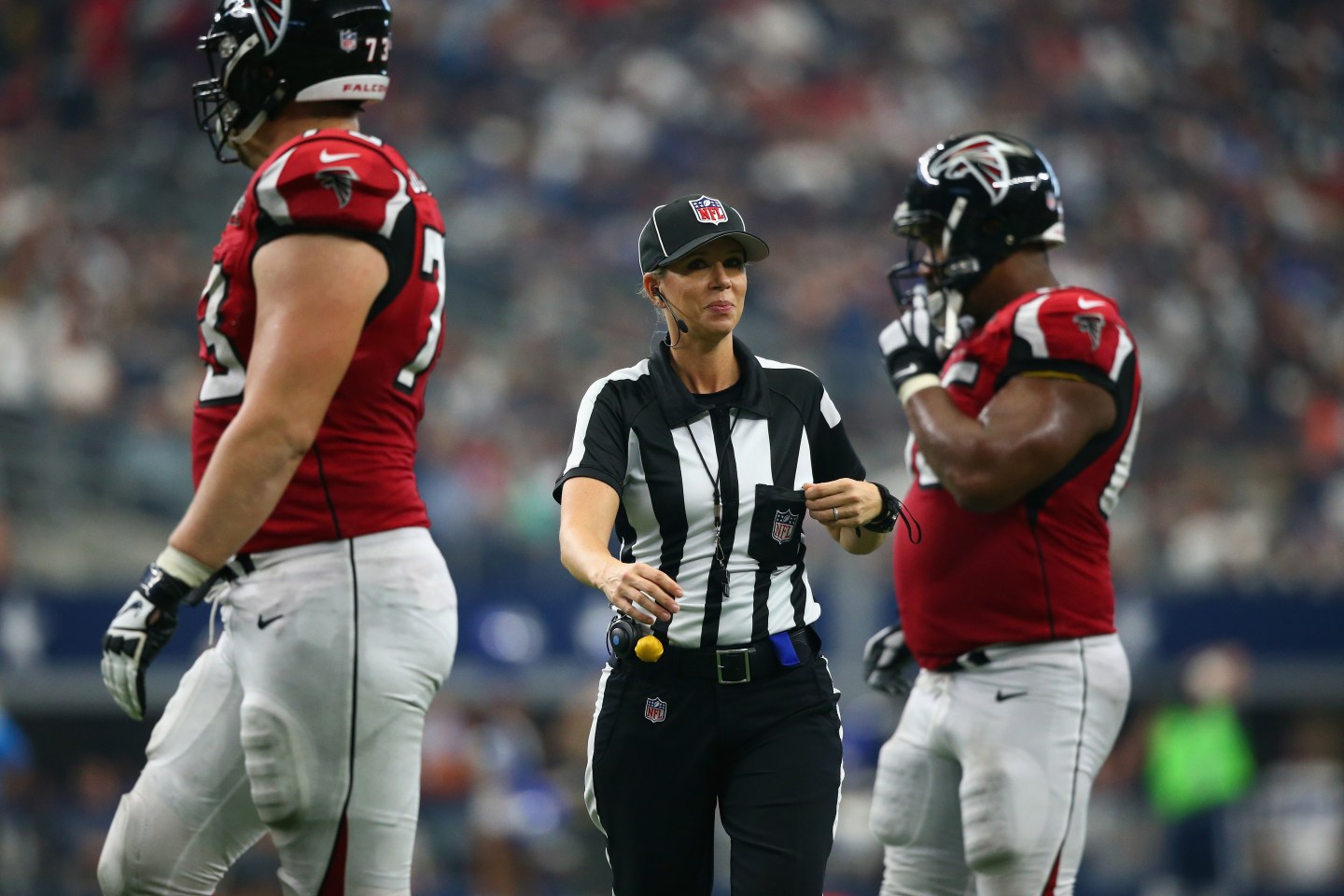 In August 2000, longtime football fan Cat Conti was working at a sports bar in California when a local high school coach suggested that she could consider officiating.

“I remember laughing at him,” she said.

Nevertheless, Conti was intrigued and she attended a training session for high school officials. “The man there said, ‘This is football officiating. Not volleyball. It’s a contact sport,” she said. “I said, ‘Great.’”

Today, Conti is a referee with the Big 12, the first women to ever officiate in the conference and is still a rarity in football more than 15 years after that initial chuckle. Of 122 NFL officials, only one—Sarah Thomas—is a woman. Thomas joined the pro ranks this season, the first female official in the league.

The NFL is now in the midst of trying to recruit more women follow in Conti and Thomas’ footsteps with a program designed to put more female officials on the football field.

It’s no surprise that the sport is looking for ways to increase the visibility of women. Even as 44% of today’s football fans today are female, according to data from the ESPN Sports Poll and the U.S. Census, the game—at least at the elite levels—has been able to muster about as much momentum as a deflated pigskin when it comes to improving it’s relationship with women. A flurry of domestic violence cases at the collegiate and professional level marred the integrity of the game off-field, as well as questionable handling of the cases by football executives. (Most notably, the league was blasted when it offered only a two game suspension of Ray Rice after video surfaced of him dragging his fiancée by her hair in an Atlantic City elevator.) Several squads of NFL cheerleaders have sued the league regarding compensation and treatment. And despite a few recent female hires, the league is still largely operated by men, financed by men and reported on by men.

Recognizing the jarring gender disparity, as well as the continuing need for quality officials, in 2012 the NFL began to ramp up its efforts to recruit women officials, says Terell Canton, the program manager of football development with the NFL. The league launched Women Officiating Now, a subset of their recruiting efforts, which focuses on bringing more women to training workshops and sponsors events for female officials, including one last year with the International Women’s Football League.

“It’s about engaging females in the opportunity,” Canton says. “I think many women don’t realize it’s an opportunity because they don’t see women doing it. We want to give them support and get them involved.”

The league has roughly 300 officials who go through its training programs across the country. Anywhere from two to five percent of each class are women, says Canton.

The NFL has more than 50 scouts who canvass high school and collegiate games to recruit potential officiating talent, Canton says. Additionally, the league has a grassroots program that aims to get a broad base of officials engaged in high school and Pop Warner games, with the hope that they will ultimately advance to more senior leagues, a similar trajectory to that traveled by players. Typically, Canton says, a referee at the NFL level will have five to 10 years of experience with collegiate officiating by the time they hit the pros.

“It’s a progression,” Canton said. “All of our officials start at Pop Warner and some advance quite fast based on opportunities. An official in Texas, for example, would have access to so much football. They could rise up the ranks very fast by virtue of the experience gained.”

In seminars, attendees learn the basics of officiating: the rulebook, how to handle confrontations on the field, proper hand signal use. The schedule of an official can be punishing, particularly with weekend travel. “Having thick skin is definitely part of the recipe of being a great official,” he said.

While we’re nowhere near gender equity in football officiating, Conti says she thinks it’s possible for determined women to move things in the right direction.

“I knew there had never been any women officiating games that I watched,” Conti said. “I knew no females had ever done it and that it was not done. But that didn’t mean it couldn’t done, nor did I ever worry about how I was going to be embraced. I thought, ‘I love it. I want to be here. I want to learn.’ It was very much for the love of the game and I just wouldn’t be deterred.”

Conti’s hope is that more women will consider officiating, particularly as women like her and Thomas build attempt to foster a culture of mentorship. While officials are spread throughout the country, they’ve been able to stay in touch via email and conference calls.

“It’s hard enough to walk the journey of an official,” Conti said. “It’s an interesting community and now we’re a subset of this elite fraternity. We talk about how we make each other better and stronger. If I’m able to connect with other females and share with them the experiences I’ve had over the last 16 years, positive and negative, then it makes all of us stronger and better.”

She added, “I never want to be prevented an opportunity because of my gender. I knew I would be more highly scrutinized and would have to prove myself. But if they saw I was a good official and I had the opportunity, that was my goal.”