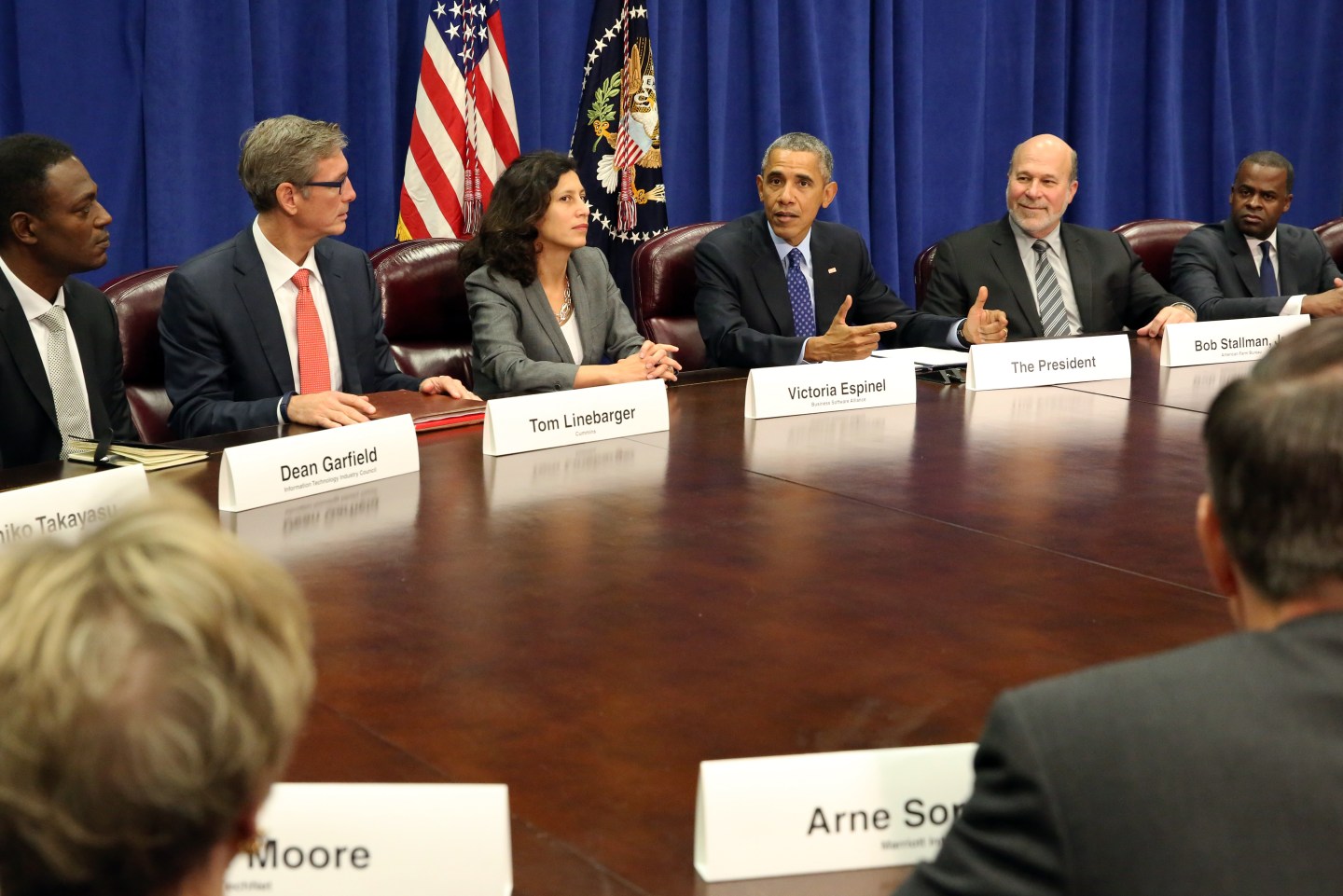 President Barack Obama meets with agriculture and business leaders on the benefits of the Trans-Pacific Partnership for American business and workers, at the Department of Agriculture in Washington, Tuesday, Oct. 6, 2015. Flanking the president are Victoria Espinel, CEO, The Software Alliance (left); and Bob Stallman, Jr., President, American Farm Bureau.
Pool 2015, Martin H. Simon

Earlier this month, the U.S. Trade Representative announced the completion of negotiations on the Trans-Pacific Partnership (TPP). Despite the agreement’s far-reaching scope, some commentators have heavily criticized its exclusion of China.

The disappointment is understandable. China is now the world’s second largest or largest economy – depending on whom you ask. Although President Barack Obama rightly notes that the global economy is too important for China to write its rules, the exclusion of this important market will certainly make the regional pact less attractive.

One question that has not been explored much within the U.S. is whether China actually cares about its being excluded from the TPP. It is also worth asking what followup actions China will take in response to the adoption of this regional pact.

Why China might care about being left out of TPP
From its inception, the TPP has been considered by many as a strategic instrument to isolate or contain China. Given the country’s ambitions, its leaders are understandably concerned about the concerted effort by the U.S. and other Asia-Pacific countries to curtail its economic growth and geopolitical influence.

China’s outsider status could also be seen as an indictment of its inadequacies, such as limited intellectual property protection and a lack of government procurement standards. The exclusion of China not only has caused the country to lose face, but has also provided a painful reminder of its continued struggle to gain an equal status in the international community. Finally, the lack of TPP membership will prevent China from enjoying new tariff reduction and preferential market access. If this regional pact is to operate according to design, it will divert trade and manufacturing from China to TPP members.

Why China could care less
Nevertheless, four reasons exist to explain why China may not care much about its being left out of the TPP. First, China continues to actively engage its neighbors and trading partners. Indeed, many Asian countries – including those involved in the N – fear that they will have to pick between China and the U.S. As policymakers from Australia and New Zealand have reportedly told their U.S. counterparts in the early stages of the negotiations, their countries would withdraw if the TPP were designed to contain China. Without containment, however, countries can still negotiate other bilateral or regional trade agreements with China.

Second, that the U.S. and other like-minded countries have gone outside the World Trade Organization (WTO) and other multilateral fora to negotiate new rules has set an important precedent for China to undertake similar maneuvers. From China’s perspective, such maneuvers could come in handy when the country needs to avoid multilateral intervention in sensitive matters such as those involving Taiwan, Tibet and the South China Sea.

Third, China continues to face myriad challenges within its own economy, which include massive urban migration, widespread unemployment and an enormous gap between the rich and the poor. Although China has worked hard in the past two decades to ensure compliance with WTO rules, the country may not be ready for new and higher trade standards. These standards can be particularly burdensome in view of the recent downturn of the Chinese economy.

Finally, China is unlikely to be able to join the TPP unless some of its standards are substantially revised. For example, the agreement’s government procurement standards would drastically alter the structure and operation of Chinese state-owned enterprises. The TPP electronic commerce standards could also deeply affect the country’s censorship and information control policy.

China’s wait-and-see approach
Given its ambivalence about the TPP, China may initially take a wait-and-see approach – or what its Ministry of Commerce has called an “open-minded attitude.” After all, the TPP negotiations have only been recently concluded, and it will take some time before the final agreement is adopted. At this point, it remains difficult to predict whether the U.S. and other negotiating parties will quickly ratify the pact.

An instructive point of comparison is the Anti-Counterfeiting Trade Agreement (ACTA), which was negotiated by the E.U., the U.S. and other developed and like-minded countries. Although this controversial agreement was adopted in April 2011, it has yet to enter into force. Thus far, only Japan has ratified the agreement. Many commentators have therefore wondered whether ACTA will ever take effect.

Second, China may become more active in the negotiation of the Regional Comprehensive Economic Partnership (RCEP) within the ASEAN+6 framework, which includes ASEAN, Australia, China, India, Japan, New Zealand and South Korea. Thus far, commentators have been skeptical of this initiative – due in large part to the slow pace of development within ASEAN. Nevertheless, if China considers the RCEP an important instrument to counterbalance the TPP, it may exert greater pressure on its neighbors, or even offer attractive concessions, to ensure the completion of the RCEP negotiations.

Third, in view of the TPP, China may reassess its cooperation with the U.S. For those embracing a growing G-2 partnership between the two countries, the TPP could provide a major setback to U.S.-China cooperation in areas such as climate change, nuclear nonproliferation and cybersecurity. China may also develop a closer relationship with the E.U., considering that the latter was equally left out of the regional pact.

In sum, the TPP could elicit responses from China that would dramatically alter the trade and power dynamics within the Asia-Pacific region. Yet enough evidence suggests that China may initially take a wait-and-see approach – at least before the TPP enters into force.

Peter K Yu is a professor of law and co-director of the Center for Law and Intellectual Property at Texas A&M University. This article originally appeared on The Conversation.