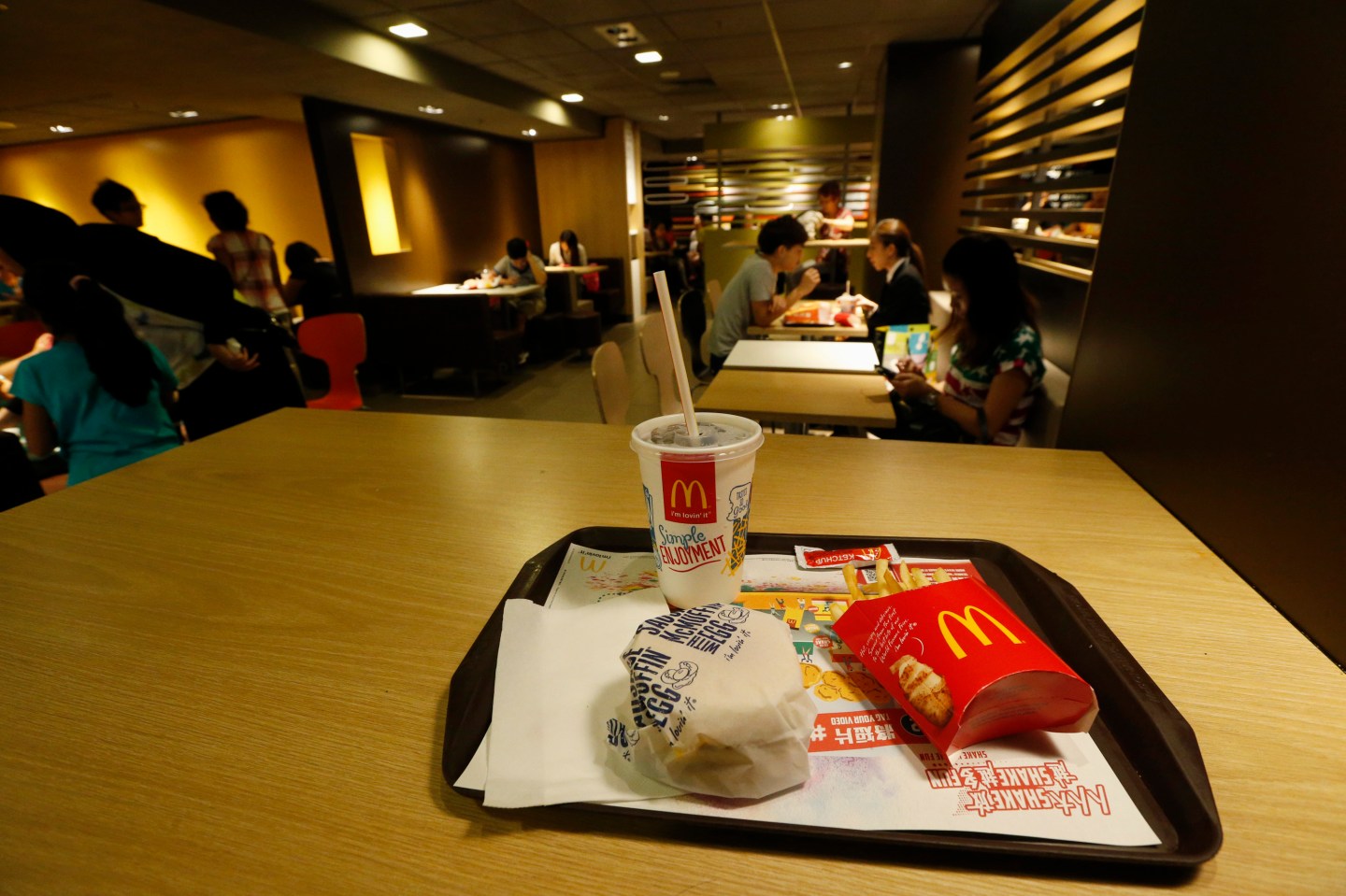 A burger set is displayed at a McDonald's restaurant in Hong Kong in this photo illustration taken July 31, 2014. Around two-thirds of the more than five dozen consumers Reuters reporters spoke to in Shanghai, Beijing and Hong Kong on Thursday said they would scale back their visits to McDonald's, at least for now. Diners in Hong Kong also said they were likely to eat less frequently at McDonald's, but noted that the chain's low prices made it hard to give up. REUTERS/Bobby Yip (CHINA - Tags: HEALTH BUSINESS FOOD) - RTR40T5R
Photograph by Bobby Yip — Reuters

McDonald’s, lately struggling to find solutions to flagging sales and a weakened reputation, is promoting a movie that advises high-school students that if they eat at McDonald’s, they will be following a healthy, “balanced” diet.

It is offering to school officials a documentary produced by a high-school science teacher who claims he ate only at McDonald’s for six months and lost nearly 60 pounds. He also exercised.

John Cisna, the Iowa teacher, made the short documentary. “540 Meals: Choices Make the Difference,” in 2014 as a retort to Morgan Spurlock’s “Super Size Me,” which came out more than a decade ago and was widely viewed as an indictment not only of McDonald’s, but of fast food in general and indeed of the entire industrial food system. Spurlock ate nothing but McDonald’s for 30 days, and reported suffering a panoply of physical and psychological ills, including weight gain, elevated cholesterol, and mood swings.

Unlike Cisna, Spurlock started out in good physical shape, and didn’t discriminate in his food choices. He purposefully ate to excess, always answering “yes,” when counter clerks asked if he wanted to “super size” his meals.

By contrast, Cisna, who started out overweight and out of shape, limited himself to just 2,000 calories a day, though he ate every item on the McDonald’s menu at least once, including dessert items.

After getting attention for his film, Cisna was approached by McDonald’s, for whom he is now a paid “brand ambassador,” making appearances at schools and maintaining a busy Twitter account where he promotes his school appearances.

This week, freelance writer Bettina Elias Siegel reported on her blog, The Lunch Tray, that McDonald’s has produced a “teacher’s discussion guide,” which suggests the 20-minute documentary be shown in classes “as a supplemental video to current food and nutritional curriculum.” A McDonald’s franchisee in the New York Tri-State region issued a press release in August recommending “540 Meals” to “high school educators looking for information to demonstrate the importance of balanced food choices.”

Siegel, who advocates for healthy school meals, was scathing in her assessment of all this. The documentary amounts to a “veritable infomercial for the beleaguered fast food chain,” she wrote. And worse, it’s promoting a dangerously unhealthy approach to eating. Anyone can lose weight by restricting calories, even if they eat fatty, salty, sugary foods, Siegel noted. “But ‘540 Meals’ is hardly a neutral lesson in calorie balancing. Instead, it instills in children as young as age 11 the explicit and potentially harmful message” that eating fast-food on a regular basis is harmless.

McDonald’s, meanwhile, is standing by its use of documentary, while also stressing it didn’t create the movie.

Cisna’s “original experiment was conducted independent of McDonald’s, and McDonald’s Corp. did not learn about John nor his experiment until it gained national media attention in January 2014,” McDonald’s spokeswoman Lisa McComb wrote in an email to FORTUNE. “Later that year, McDonald’s named John Cisna an official brand ambassador and he travels the country to share his personal story of choice and balance.”

John’s story is not a weight loss plan, and we do not recommend that anyone eat every meal at one restaurant every day for an extended period. Rather, John’s story is about making informed and balanced choices no matter where you choose to eat and incorporating exercise into your daily routine.

As an educator, he independently conducted his experiment and he uses it to promote critical thinking about balance and informed choices. As part of his relationship with McDonald’s, the original documentary John Cisna created to track his experiment was updated to better reflect the importance of food choice and balance together with moderate physical activity.

Cisna did not respond to a request for an interview.