Europe vs. the sharing economy: Spain’s bus drivers star in the latest round 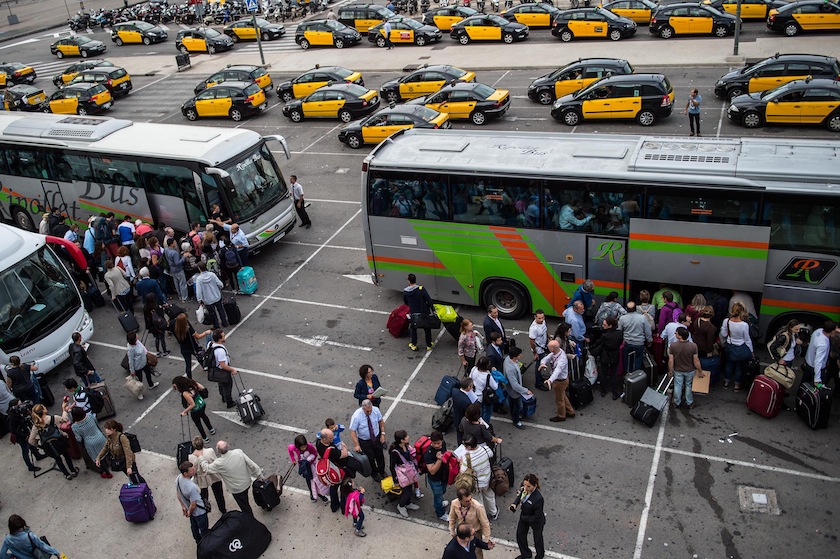 BARCELONA, SPAIN - OCTOBER 08: Travellers board buses heading to Tarragona and Figueres-Vilafant train stations as the AVE high-speed train services remain suspended at Barcelona-Sants train station on October 8, 2015 in Barcelona, Spain. A total of 20 trains and 7,000 travellers have been affected since early this morning after a suspected theft of fiber-optic cables used to power the communications system. AVE services have been halted between the stations of Vilafranca and Figueres-Vilafant. Trains departing from Madrid are also affected. (Photo by David Ramos/Getty Images)
Photograph by David Ramos—Getty Images

Two years ago, a friend told Jorge Martín about the carpooling website BlaBlaCar, which matches drivers with potential passengers willing to defray the costs of a long car journey. It seemed like it had been made for Martín, a Madrid bank worker whose wife and daughter were living in their hometown of Almería, 550 kilometers (325 miles) to the south.

Pretty soon, on most weekends he was doing the five-hour drive home with several strangers he met via BlaBlaCar. Each put in about €20 (about $23); with three passengers, he collected a little more than enough to cover gas, which ran €40-€50.

“I travelled ‘free,’” says Martín, 35. “I say that in quotes because I took the car in to be checked every few months.”

As harmless as carpooling may seem, Martín and BlaBlaCar’s 2.5 million other registered users in Spain have become the latest flashpoint in a war in Europe between web-based proponents of the “sharing economy” and incumbent industries with high sunk costs that accuse the upstarts of unfair competition.

A judge in Spain has already forced ride sharing app Uber to shut its low-cost ride service, and in Paris two of its executives were detained by police. In the case of BlaBlaCar, on October 1 a Madrid judge—the same one who shuttered Uber’s ride service—took up a suit filed by the trade group representing Spain’s intercity bus companies, Confebús.

Using BlaBlaCar, which was founded in 2006 and launched in Spain in 2009, drivers can publish a journey they plan to make and set a trip price in a range suggested by the site. People who want to make the same journey can then sign up and pay BlaBlaCar, which takes a commission and charges tax before passing on the remainder to the driver

The Confebús trade group says this constitutes unfair competition because BlaBlaCar is essentially operating a for-profit public transportation company without complying with the necessary licenses and regulations. Bus companies have to carry certain kinds of insurance and provide service even if the buses are almost empty, for example.

Confebús has asked the judge to issue a restraining order to shut the service down.

“We are an industry subject to regulation and BlaBlaCar is operating in the same industry without complying with the same regulations,” says Rafael Barbadillo, co-president of Confebús. “The rules of the game have to be for everyone. They can’t hide behind e-commerce laws. We also sell a lot of tickets online.”

Without question, Spain’s bus industry has suffered in recent years. The number of passengers who took long-distance buses (over 300 km) fell by 18.9% between 2009 and 2014, something that Confebús attributes in good part to BlaBlaCar.

According to a Confebús study of 17 major routes, on Fridays BlaBlaCar offers an average of 32% of the number of seats for sale by bus companies – and usually at significantly lower prices. At the time of writing, a BlaBlaCar trip from Madrid to Valencia could be found for €15, while a bus ticket cost almost double that amount.

But to the eyes of the Paris-based BlaBlaCar, which just raised $200 million in venture capital, Confebús’ suit is just a dying industry looking for a scapegoat.

According to the service’s country manager for Spain, Jaime Rodríguez de Santiago, BlaBlaCar is not a transport company but a social network that puts riders and drivers together to help them save money. While the service collects a 10-20% commission, the drivers barely break even, meaning they don’t qualify as professional transport companies. Over 96% of the service’s users do an average of less than two trips a month, Rodríguez de Santiago says, and 97.6% make less than €50 euros a month.

In this, Rodríguez de Santiago takes great pains to point out the differences between BlaBlaCar and the banned Uber, whose drivers are most definitely in it for the money.

“Their drivers are doing it for profit; ours are not. Theirs is a radically different model,” he says, noting that courts in other parts of Europe have drawn a hard legal line between making money and sharing costs.

The bus industry has blamed other sources for its problems, anyway, Rodríguez de Santiago says, noting that Spain’s economic crisis hurt all domestic travel companies and that Confebús has filed an unfair competition suit against Renfe, the country’s monopoly high-speed train operator, for dramatically lowering its ticket prices.

The judge’s ruling is expected in the coming days. But the issue may not be whether BlaBlaCar is legal or not under the existing rules. Instead, says Sandra Sieber, a professor of information systems at Barcelona’s IESE Business School, it may be that the rules need to be rewritten for a new age, and ways need to be found to compensate legacy operators most affected by “sharing economy” services – like taxis and buses.

“With the entry of this new business model, the old forms don’t hold. So the question is how to rethink the sector, and that has to be agreed upon. The common good has to be debated,” Sieber says.

What form that solution takes is up for discussion, of course. Sieber mentions the possibility of Uber-like services paying into a trust fund that would compensate taxi drivers who bought their licenses – an expensive investment now rendered almost worthless – on the assumption that they could sell it at retirement to finance their golden years.

“From the social point of view, it’s logical to do something because you’ve ruined the modus vivendi of a taxi driver,” she says. “If I am about to retire and I was going to fund it with selling the license and now I can’t, something has to be done.”