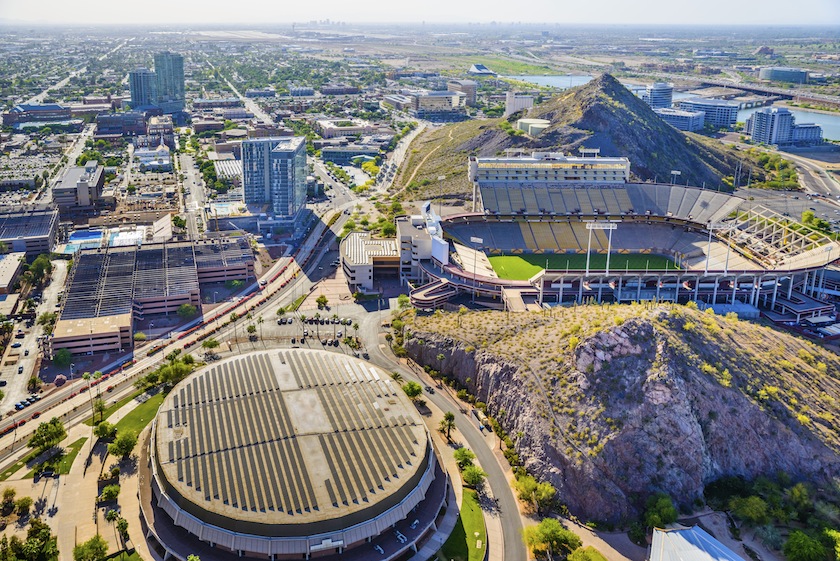 (Poets&Quants) — On Wednesday, Arizona State University’s W. P. Carey School of Business became the first school to make its full-time MBA program completely free, with no strings attached. The decision to increase its annual intake of MBA students by 40% to a class size of 120 and to cover the full tuition and fees of every enrolled student will ultimately result in a loss of more than $20 million annually.

The big question: Is it merely a PR gimmick?

Amy Hillman, dean of the Carey School of Business, would certainly refute that notion. She’s saying a tuition-free MBA will more freely allow graduates to pursue startups and work in the social sector.

“If someone has a great start-up idea, and they know they would be more successful in their venture if they had the skills and networking that an MBA would give them, they might be concerned about spending the money because it takes away from the capital needed for the start-up venture,” Hillman says in a statement. “We’re very hopeful that we’ll get more high-quality applicants as a result of this program, and the kinds of people who might think they can’t pursue a top MBA program.”

Applicants who apply to Carey for admission to its full-time MBA program next fall will be eligible for the free deal. Tuition and fees for the full-time MBA program are $54,000 for Arizona residents, $87,000 for non-residents, and $90,000 for international students. If the typical mix of students enter the program, it would cost Carey slightly more than $10.5 million a year, or over $20 million annually when first and second-year students are counted.

Hillman says the funding for what it is calling the “Forward Focus” MBA program will largely come from the original endowment from William Polk Carey, the real estate investor whose foundation donated a $50 million naming gift to the business school in 2003. “His investment in us can allow us to invest in these students,” Hillman says, who adds that ASU is committed to the free deal beyond next year. “I think this really is the path forward.”

The novel offer comes at a time when an increasing number of educators are saying the MBA degree is overpriced. Betsy Ziegler, chief innovation officer for Northwestern University’s Kellogg School of Management, recently told a conference of business school officials that “we are pricing ourselves out of the market.” She cited annual increases in tuition of 4.5% in the past five years far outstripping increases in MBA starting salaries which have risen by only 1.6% a year. “Demand and supply is misaligned,” Ziegler said. “The power is shifting to the student. The expectation that they will pick reputation over everything else is fading.” Ziegler made the remarks at a September conference in Chicago sponsored by the AACSB, the accrediting body for business schools.

Last month, Rochester University’s Simon School of Business slashed the cost of its two-year MBA program by 13.6% to $92,000 from $106,440. Dean Andrew Ainslie said he believes that Simon’s tuition costs were higher than the costs for the MBA programs at several peer schools and needed adjustment. “We have all gotten into this habit of upping our prices 3% to 5% a year and then separately being worried about attracting the best students,” he told Poets&Quants. “So everybody has been simultaneously raising their scholarship support.”

In the past five years, many of the nation’s top business schools have been in what several deans call “an arms race” to use scholarships to get the best students to attend their MBA programs. Scholarship dollars range from a high of $31.5 million a year at Harvard Business School to $3 million a year at the University of Texas’ McCombs School of Business. The ASU plan clearly ups the ante on the scholarship wars.

For ASU, the free-MBA deal will further cement the university’s reputation as one of the more innovative players in higher education. More importantly, perhaps, it also will give the school a significant boost in the rankings. Carey’s MBA program is currently ranked No. 41 by Poets&Quants and generally competes in a peer group of such public universities as the University of Illinois at Urbana-Champaign, the University of Iowa, and the University of Georgia—all U.S. schools in the top 50. By offering free tuition, MBA applications should soar and the school should be able to make itself much more selective than its current 25% acceptance rate.

Carey’s full-time MBA program receives fewer than 500 applications a year, typically enrolling a class of fewer than 70 students who have an average GMAT score of 673. The MBA class that began this semester was on the high side, with 86 students, 70% of whom are male. The average age of the group is 28, and about a quarter are international students, down from 33% a year earlier.

Because differences among MBA programs ranked in the second tier of the top 50 are small, improvements in those metrics should result in a big jump in Carey’s rankings. Earlier this year, U.S. News ranked Carey 30th best in the U.S., a drop of three spots from its No. 27 ranking in 2014. It’s almost certain that the free tuition deal will put the school’s MBA program in the top 25 in the U.S.

Full-time MBA rankings tend to have a halo effect for a business school’s overall programs, so the investment seems calculated to have an offsetting benefit for Carey’s reputation. The free-MBA deal may especially appeal to international students from emerging economies who find U.S. tuition prices shocking.

The school says that it hopes recipients of the full-scholarship offers will “pay it forward to future do-gooders.” “What we’re hoping to engender in the students is that this is like an ‘angel investor’ who has invested in them as opposed to an enterprise, and as they go out to be successful in whatever walks of life, they will make this opportunity available to those students who come behind them,” says Hillman.

Anatomy of a Rebellion: Inside The Revolt Against The Stanford Business School Dean

Why The MBA Remains An Awesome Investment