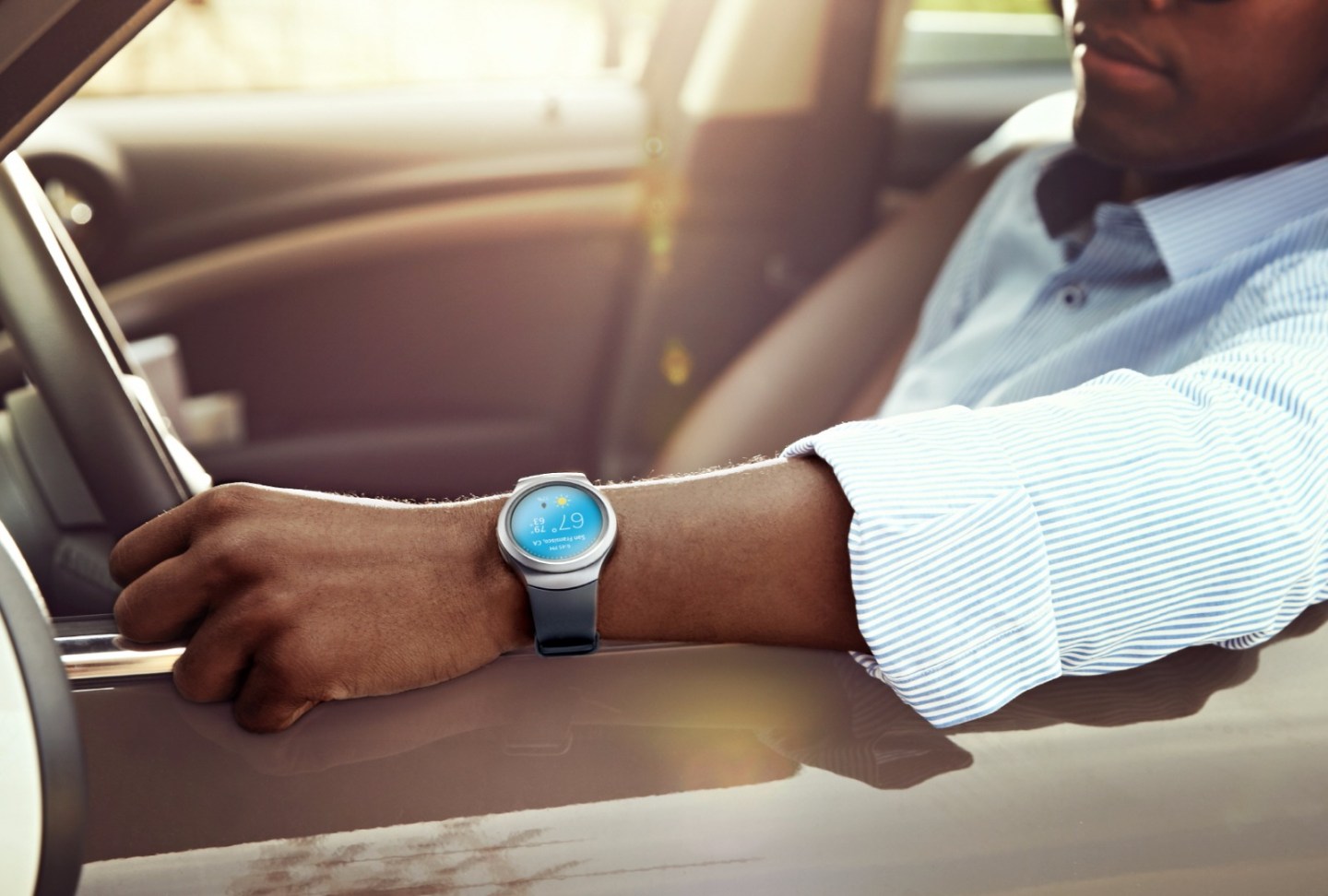 Samsung (SSNLF) is once again trying its hand at creating a must-have smartwatch with the Gear S2. The circular smartwatch is compatible with other Android smartphones, and includes an easy-to-use rotating bezel.

The Gear S2 will work with any Android device running Android 4.4 (KitKat) and up that also has 1.5-gigabytes of RAM or more, unlike most of Samsung’s previous wearables that only worked with Samsung smartphones. If you’ve purchased a high-end Android device in the past year, or so, you should be safe.

Despite the new upgrades, is Samsung’s new smartwatch good enough to compete with Android Wear, Pebble, or even the Apple Watch? Let’s take a look.

One of the most important aspects of a smartwatch is how it looks on your wrist, and in that area the S2 excels. I’ve been wearing the $299 dark grey Gear S2, which is composed of stainless steel housing and a matching “elastomer” (rubber) watch band. The Gear S2 is also available in a white color scheme.

Unlike some of Samsung’s previous smartwatches, I like the look and feel of the S2. It’s comfortable to wear, and doesn’t look as awkward as the Gear Fit or original Gear S.

Samsung also released a slightly more expensive Gear S2 Classic. Carrying a $50 premium over the standard S2, The premium smartwatch offers a more refined look, and comes with a leather band. I prefer the look of the classic model, but the lower-priced S2 is still a looker.

The device also comes with a small watch band, a large watch band, magnetic wireless charging stand, microUSB cable, and a power adapter. The standard S2 will only work with a proprietary connector when installing third-party bands, while the S2 Classic will work any 20-millimeter band.

When setting up the watch with a non-Samsung smartphone, you’ll first need to download the Samsung Gear companion app for managing settings and apps. The app walks you through how to pair the watch and smartphone via Bluetooth, although once a connection is established you’re immediately prompted to install another app called GearS2Plugin from Google’s Play Store. Afterwards, you’re asked to yet again install another application called Samsung Accessory Service. Only after all the three apps are installed on your smartphone are you able to begin using the watch.

Setting up the S2 with a Samsung smartphone does offer a more streamlined approach, with any additional software being downloaded on your behalf during the setup process (instead of forcing you to go between the Gear app and Google’s Play Store).

In contrast, Android Wear and Apple Watch apps bundle everything together inside their respective platform apps. Meaning, if you download an Android app that offers Android Wear support the application is instantly installed without any additional work required on the users part. The same can be said about how Apple Watch apps.

Competing smartwatch platform Pebble faces the same OS-level integration hurdles as the Gear S2. Only instead of forcing users to download multiple pieces of software, users can download and manage apps on their smartwatch using a dedicated Pebble app. Neither solution is ideal, but Pebble offers a more user-friendly workaround.

Surrounding the 1.2-inch screen is a rotating bezel. A quick turn to the right or left and you’re able to browse missed notifications, or scroll text up or down; similar functionality is found throughout the interface. I found the bezel to be intuitive and easy to use, and—in some ways—better than the Digital Crown found on the Apple Watch. A pair of buttons on the right side of the watch also act as a back and home key.

Samsung lists battery life at “2–3 days” and after a week’s worth of use, I can report I’ve consistently landed on the lower end of that range, and that’s fine with me. Apple’s (AAPL) smartwatch can go past a single day, but will need a mid-day boost, whereas the Gear S2 gets through two complete days without a recharge.

Overall, there’s a lot to like about the Gear S2: design, intuitive interaction, battery life. Ultimately, however, the initial setup experience combined with a frustrating experience when installing a single watchface is a drawback. In other words, don’t expect much outside of a step tracker or notification manager.

Samsung has told me there are “plenty of apps” set to launch in the coming months, but I just can’t see mass developer adoption of a platform that’s so disjointed when it comes to something as simple as installing an app.

At the very least, hopefully other smartwatch manufacturers will take note of the rotating bezel and battery life and incorporate it into future devices.

For more on Samsung, check out the following Fortune video: