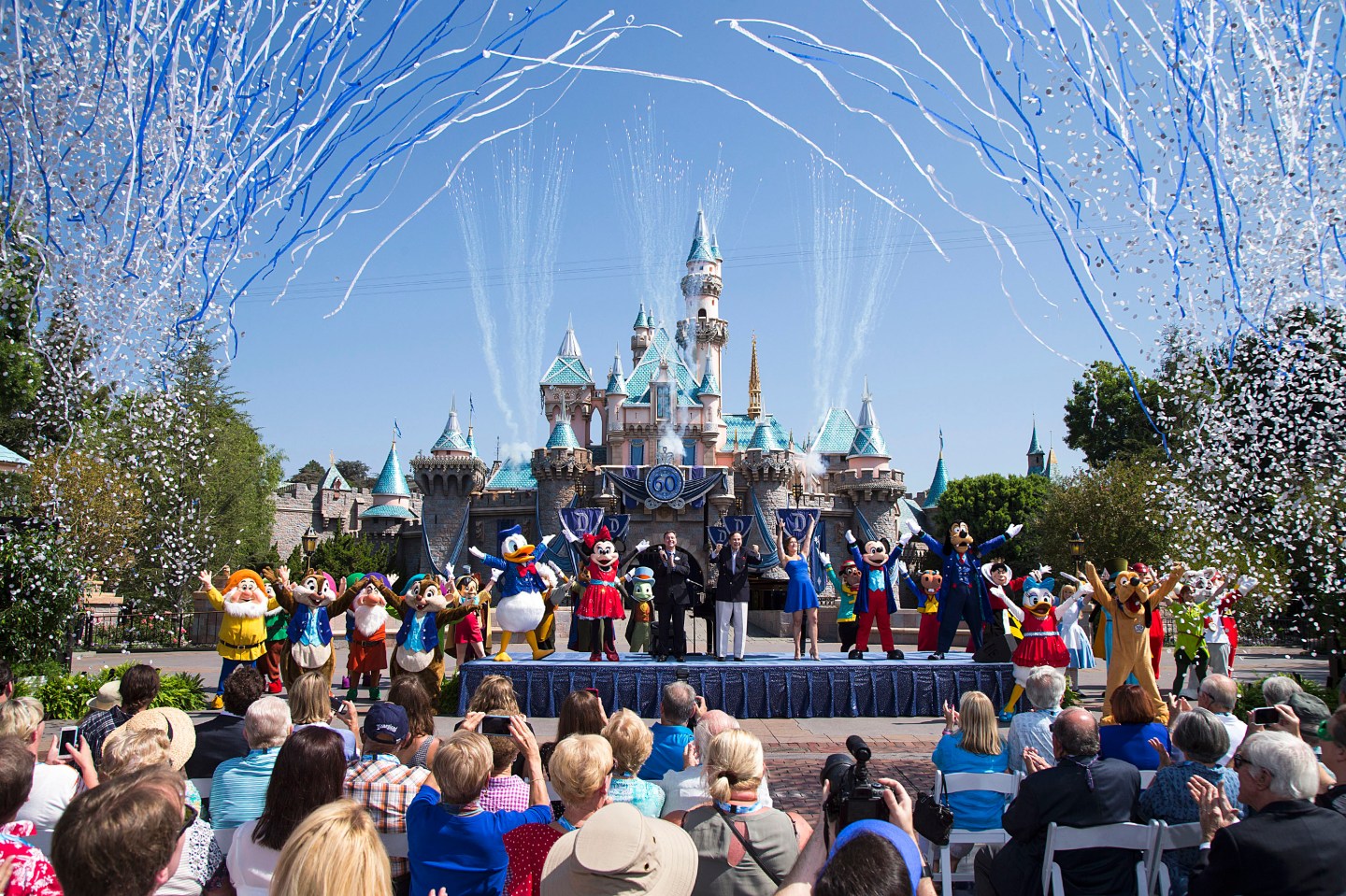 (July 17, 2015) Ð Mickey Mouse and his friends celebrate the 60th anniversary of Disneyland park during a ceremony at Sleeping Beauty Castle featuring Academy Award-winning composer, Richard Sherman and Broadway actress and singer Ashley Brown, in Anaheim, Calif. on Friday, July 17. Celebrating six decades of magic, the Disneyland Resort Diamond Celebration features three new nighttime spectaculars that immerse guests in the worlds of Disney stories like never before with "Paint the Night," the first all-LED parade at the resort; "Disneyland Forever," a reinvention of classic fireworks that adds projections to pyrotechnics to transform the park experience; and a moving new version of "World of Color" that celebrates Walt DisneyÕs dream for Disneyland. (Paul Hiffmeyer/Disneyland Resort)
Courtesy of Disney Enterprises, Inc.

When the Walt Disney Co. (DIS) announced in 2009 that it had reached an agreement to buy Marvel Entertainment and most of its associated comic assets for $4 billion, a ripple of fear spread through the comic industry: Would Disney ruin all those great Marvel characters like Iron Man and The Avengers? And on the financial side of the equation, more than a few investors were concerned that the entertainment giant might have paid too much for Marvel. Could there really be that much value in the comic-book empire?

Six years later, it seems more obvious than ever that the fears of both of these groups were completely unfounded. Measured by almost any standard, artistic or financial, Disney’s acquisition is arguably one of the best things that CEO Bob Iger has ever done. Only the company’s acquisition of Pixar—which the company bought in 2006 for about $8 billion—even comes close and that’s mostly thanks to home video sales.

If you look at the simplest measure of value, Disney’s share price, you can see some of the power of the Marvel deal. At the time it was consummated, some investment analysts were skeptical about whether Disney’s stock was a buy, but anyone who listened to them missed out on a huge run-up in value. Disney stock was $26 just before the company acquired Marvel; it is now over $100. There have been other factors involved in the increase, obviously—including ESPN and Pixar—but Marvel is a big part.

Last year alone, Disney’s earnings climbed by more than 22% over the previous year, which is a huge increase for a company of Disney’s size. Although there were a range of hit properties, including the movie Frozen, much of the earnings increase came from assets related to Marvel, whether it was movies like Guardians of The Galaxy or merchandise sales involving characters from the Avengers’ franchise.

As of mid-way through 2015, Disney had generated box-office revenue of more than $8 billion from Marvel-related movies and TV shows, according to one estimate. That doesn’t include merchandise or other revenues related to the franchise. One analyst said that by the time it was finished with The Avengers, Iron Man 3 and the Captain America and Thor sequels, Disney probably paid for the acquisition of the entire company.

As many industry watchers expected when the Marvel deal was announced, Disney has also been expanding the number of vehicles it has that are based on Marvel characters, with multiple new movies and TV shows in the works that are centered on or make use of secondary names, whether it’s Doctor Strange or Captain Marvel. While some might associate Marvel with just a few prominent superheroes like Iron Man, the comic universe it represents is much larger than that.

And perhaps more than any other comic-related corporation, Disney has gotten some fairly good marks from comic lovers for the faithfulness of its Marvel properties and the attention to detail shown in both the movies and TV shows. Comic fans are one of the hardest-to-please audiences imaginable for popular adaptations of their favorite books, so even getting a passing mark makes Disney look better than just about anyone else.

In large part, industry insiders say Disney has done this by being relatively hands-off with Marvel, just as it has been for the most part with Pixar. The visions that some had of Disney jamming Iron Man or Captain America into awkward partnerships with other elements of the empire have turned out to be mostly smoke.

Whether Disney can manage to extend its successful track record with Marvel is an open question. The movie and TV industries are notoriously hit-driven, after all, and if the company makes a mis-step somewhere it could lose some of the potential future value of the Marvel franchise or those characters. There’s also the question of whether, as more and more superhero movies from both Marvel and Warner Brothers hit the big screen, the audience for that kind of film will become saturated. But for now, at least, it seems to be on a roll.