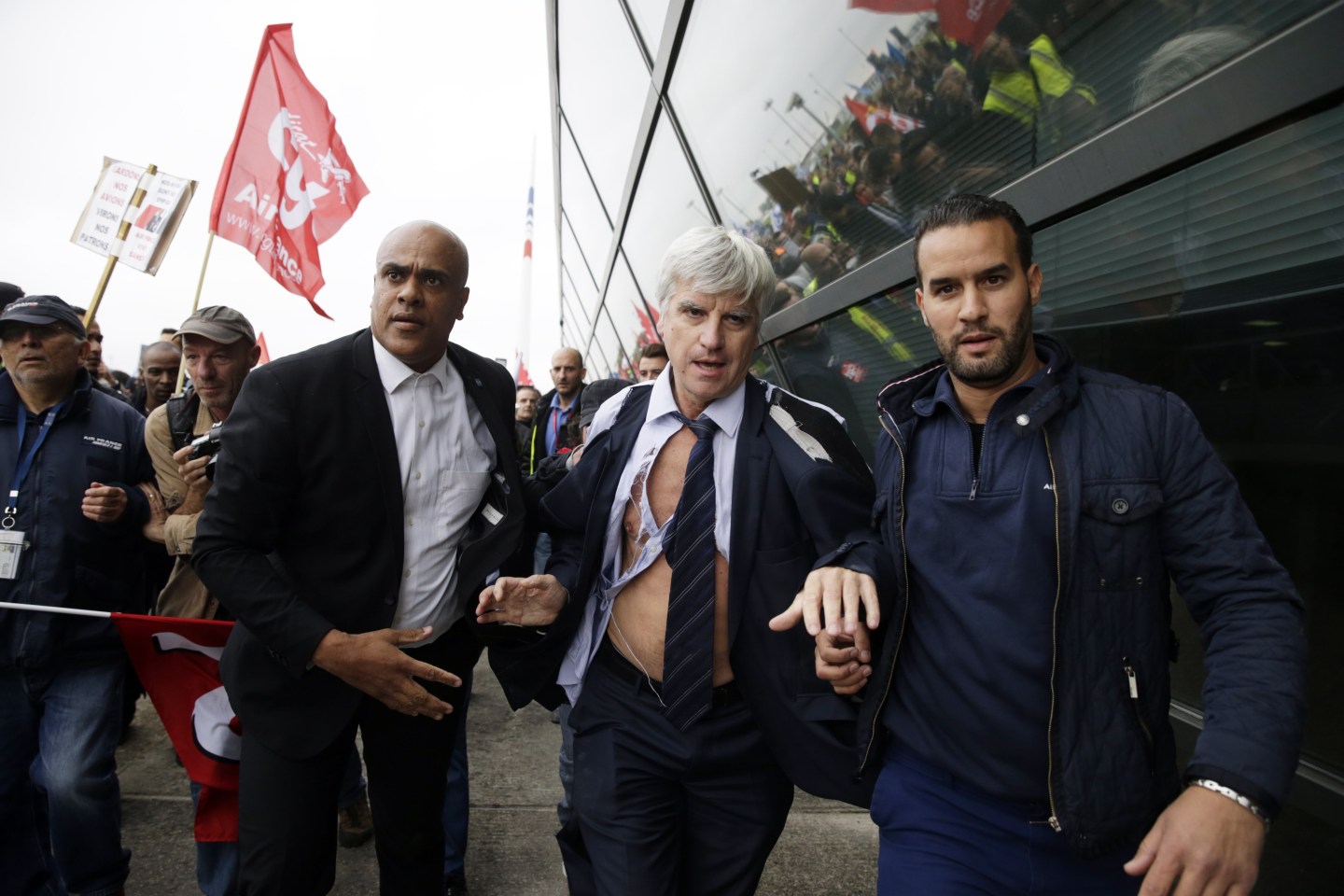 Director of Air France in Orly Pierre Plissonnier, nearly shirtless, runs away from the demonstrators, helped by security officers, after several hundred of employees invaded the offices of Air France, interrupting the meeting of the Central Committee (CCE) in Roissy-en-France, on October 5, 2015. Air France-KLM unveiled a revamped restructuring plan on October 5 that could lead to 2,900 job losses after pilots for the struggling airline refused to accept a proposal to work longer hours. AFP PHOTO / KENZO TRIBOUILLARD (Photo credit should read KENZO TRIBOUILLARD/AFP/Getty Images)
Photograph by Kenzo Tribouillard — AFP/Getty Images

Workers at Air France are angry. So angry, in fact, that a horde of them stormed a company board meeting on Monday and attacked the French airline’s executives, tearing their shirts to shreds while they fled the scene, reported the Guardian.

Xavier Broseta, the company’s human resources director, escaped with the help of bodyguards while wearing nothing but a tie on his upper body as he fought his way through hundreds of protestors. Pierre Plissonnier, VP of the airline’s hub at Orly airport in France, hopped a fence in rags to make his getaway.

Human Resources Director of Air France Xavier Broseta, shirtless, tries to cross a fence, helped by security and police officers, after several hundred of employees invaded the offices of Air France, interrupting the meeting of the Central Committee (CCE) in Roissy-en-France, on October 5, 2015.Photograph by Kenzo Tribouillard — AFP/Getty Images

Managers had convened the meeting, which took place at Air France headquarters, near Charles de Gaulle airport in Paris, in order to finalize thousands job cuts as part of a corporate restructuring plan. The losses would involve eliminating thousands of staffers, including 1,700 ground staff, 900 cabin crew, and 300 pilots, and 14 long-haul aircraft through 2017, reported Reuters, citing anonymous sources.

The airline also sought to cancel or defer its orders for 25 Boeing (BA) 787 Dreamliner aircraft, the newswire reported.

In light of the disruption, the meeting was canceled.

Air France union activists break through a gate as they storm the headquarters to disturb a meeting at Roissy Airport, north of Paris, France, on October 5, 2015.Photograph by Jacques Brinon — AP

The FNAM aviation industry union issued a statement condemning the harassment as “comportement qui date d’un autre âge” (Google translation: “behavior dating from another age”). “In this particularly difficult time for Air France, and more generally for all French airlines, FNAM urges respect for others and supports the management of the company,” the translated statement read.

The protests come at a rocky time for the company, which has been battling alternative budget airlines in Europe as well as long-haul competitors in the Middle East. Recently, the Franco-Dutch company has been drastically trying to cut costs in order to get out of the red.

Watch the incident in the video below.

For more on airlines, watch this video.