What the Pope eats in NYC 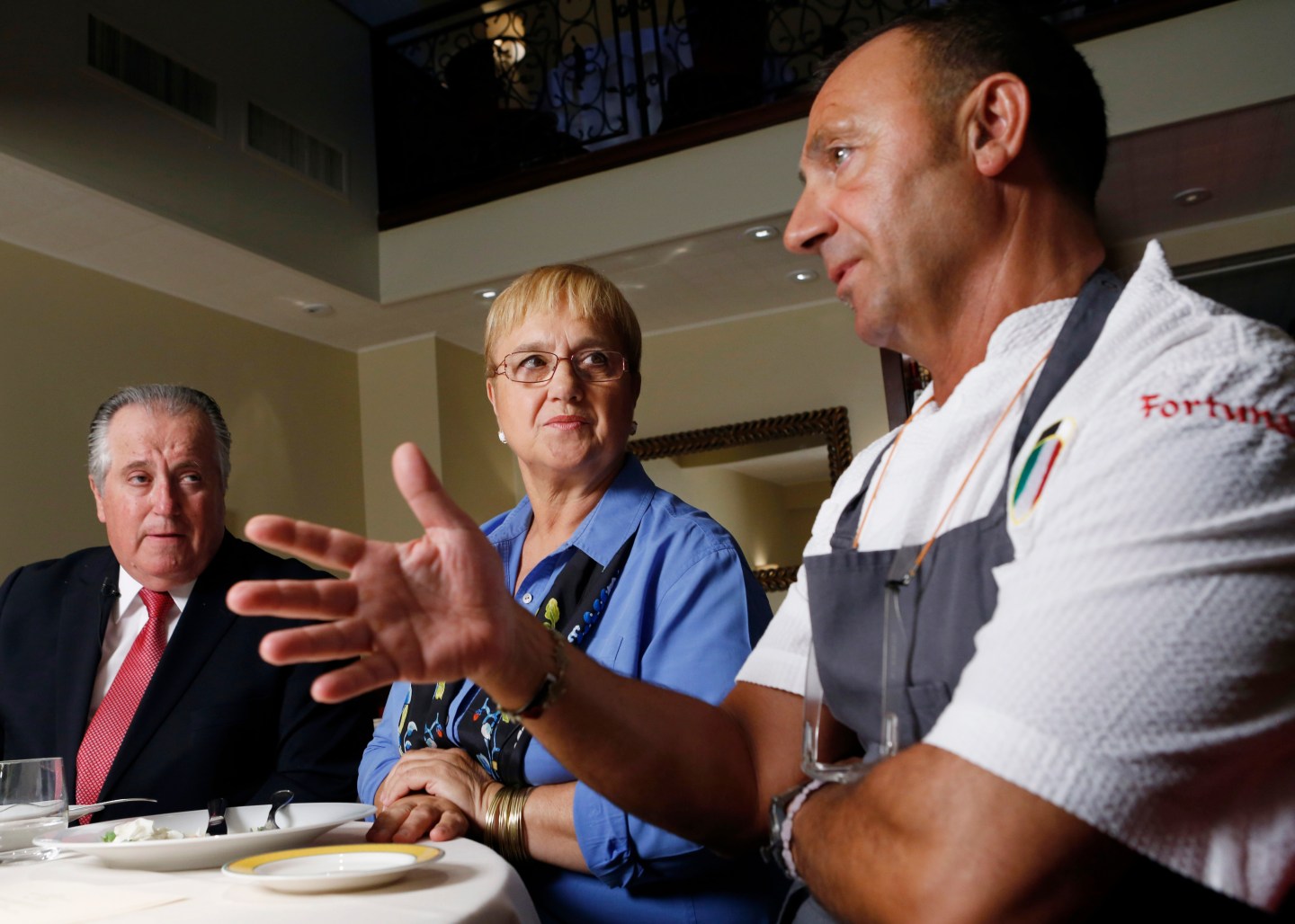 The Pope is coming to dinner.

Imagine you’ve been blessed with the rare honor of overseeing Pope Francis’ dining experience on his historic trip to America. The Vatican has chosen you not only to help pick the dishes on the menu, but to serve as the pontiff’s personal waiter. Before his arrival, the Vatican gives you the guidance of the Pope’s highly individual diet. You’re also briefed in the Papal dining protocol that dictates where the dignitaries sit, and who is served in which order. For three days, you’ll have the awesome responsibility of providing culinary comfort to one of the most famous and revered figures on the planet.

So, what do you serve?

The person who devotedly placed each plate in front of the Holy Father during the Papal New York City visit from September 24 to 26 is none other than renowned, 69-year old Manhattan restaurateur Angelo Vivolo, who has owned and run Vivolo, an Italian eatery on Manhattan’s Upper East Side, for 38 years.

Serving Pope Francis presents a special challenge. The famously frugal pontiff is just as sparing in his diet as he is with his living and travel arrangements.

“He had a highly restricted diet,” says Vivolo. “We served him the same dishes [as the other guests], but prepared differently.” The Pope passes on pasta. He likes cooked vegetables, but doesn’t eat greens, or any vegetables with seeds, cooked or uncooked, such as tomatoes or eggplant. Nor did he take even a sip of the many fine wines poured for the guests.

A pillar of the Italian-American community who heads the foundation sponsoring the annual Columbus Day Parade, Vivolo is accustomed to welcoming, and charming, famous guests. His roster of frequent customers includes Governor Andrew Cuomo, who dined at Vivolo just after the Pope’s visit, and Cardinal Timothy Dolan, the gregarious prelate of New York. “In 15 minutes, he’ll make you think he’s known you your whole life,” says Vivolo, referring to Dolan.

Late baseball great Joe DiMaggio became a buddy of Vivolo’s over helpings of parmigiano and classic Italian cheeses. “You couldn’t talk to him about Marilyn Monroe,” he recalls. “I had a signed and numbered edition of the last pictures ever taken of Marilyn, by Bert Stern, but I didn’t put them up in the restaurant until several years after Joe passed away, out of respect for Joe.”

Vivolo was already well schooled in the setting, and formalities, for serving the Papal meals in the Big Apple. He’d attended to Pope Benedict XVI and his entourage during their visit in April 2008. Once again, the Pope’s residence, and the venue where he mostly dined, was the Vatican’s Apostolic Nunciature, its embassy to the United Nations, a townhouse on 72nd Street near Madison Avenue, just four blocks from Vivolo’s restaurant. “I’d served Benedict there for three days, but walking over to the Nunciature, my feet barely touched the ground at the idea of serving Pope Francis,” says Vivolo.

In charge of the cooking was Vivolo’s close friend Lidia Bastianich, author of celebrated cookbooks and proprietor of Manhattan’s Felidia, along with Felidia’s Silician-born chef Fortunato Nicotra. The dishes were from Felidia, chosen from that menu by Lidia and Angelo. Vivolo managed the dining room with the help of Lidia’s daughter Tanya Manuali. He was also aided by his long-time maître d’ Tony Gauna, who, like the Pope, is a native of Argentina. Vivolo’s days at the embassy stretched from 5 a.m. to late into the evening.

Vivolo says that he was immediately impressed by the size of the Pope’s security detail. “He’d drive up to the embassy in a black Fiat, and it looked a lot more modest than the way Benedict arrived,” says Vivolo. “But he had many more security people traveling with him.”

A contingent of 18 security personnel accompanied the pontiff, and they belonged to two groups: the Vatican secret service, and Swiss guards, who famously patrol the Vatican clad in orange-and-blue striped pantaloons. In a testament to the elaborate precautions taken during this trip, the Swiss guards joined the secret service to provide extra protection, in street clothes sans pantaloons, of course. The top security officials stayed in the embassy, while the others were in the Carlyle Hotel, making trips back and forth to the residence to provide 24-hour surveillance.

The first meal was an 8 p.m. dinner on Thursday, immediately following the Pope’s vespers service at Saint Patrick’s Cathedral. “There were 12 people at the table,” says Vivolo. The Pope sat in the middle of the table, with two people flanking him on each side. Across the table sat five people, with the nuncio in the middle, directly across from the Pope. “Before dining, everyone stood, and the Pope said a prayer in Italian. He said another prayer at the end of the dinner.” The before-and-after blessings were a regular ritual during his stay.

Except for the nuncio or UN ambassador—archbishop Bernadito Auza of the Philippines, who speaks perfect Italian—the guests around the table had all accompanied the Pope from Rome. The entourage included the Pope’s two personal physicians, several of his top secret service officials, and his close aide, Monsignor Mark Miles. He’s the young, black-haired priest sporting rimless glasses who’s at Francis’ side in almost every photo, and who, as always, translated his greetings and conversations from Italian and his native Spanish into English.

Obeying official protocol, Vivolo always served the Pope first, followed by the nuncio and Monsignor Miles. At the welcoming dinner, the first course was buratta, a combination of mozzarella and cream, and poached lobster. “The Pope had some of that,” recalls Vivolo. A second course was capon soup with raviolini. The Holy Father, however, was served his own version, the broth with Italian rice.

For dessert, Vivolo served the pontiff angel cake with seedless compote of grape, accompanied by grape sorbetto, Italian sorbet. It was a dish that pleased the papal palate.

For the 7 a.m. breakfast on Friday, the Pope dined on fresh fruit and biscottates, crunchy square biscuits, along with tea without lemon or sugar. “Every day he met lots of people in the residence,” says Vivolo. “On Thursday night before dinner, a woman whose child had had three operations came, and he blessed the child. On Friday and Saturday after breakfast, he greeted around 35 people from local parishes.” Over those two days, the Pope blessed all four of Vivolo’s grandchildren. “The Holy Father held the tiny feet of my six month old grandson and kissed his forehead,” says Vivolo. “It was such a poignant moment.”

During his stay, the Pope greeted only one outside official at the residence. Cardinal Dolan arrived just after breakfast on Friday and met with the pontiff in an anteroom for around 15 minutes before the Pope resumed his frantic round of appearances in Manhattan.

On Friday, super-chefs Bastianich and Nicotra prepared the Pope a luncheon of cooked yellow squash and yellow onions and radicchio, served by Angelo. The second course was risotto specially tailored to his taste, containing onions and consume, but no cheese. For dinner, the regular menu featured crudo of tuna, both raw and seared. Angelo brought the pontiff plain grilled tuna and cooked vegetables with no oil or seasoning.

Pope Francis is particular about the water he consumes. He brought his own no-bubble acqua from Italy, a brand called Santa Fina, and drank it religiously at room temperature.

Vivolo was impressed by Francis’ easy, unintimidating manner with his colleagues. “The conversation flowed very freely at dinners,” says Vivolo. “The Pope was smiling and talkative despite his exhausting schedule during the day.” He and Benedict are a study in contrasts, says Vivolo. “Benedict had 24 people at dinner, and the conversation wasn’t nearly as easy or informal,” says Vivolo. “He was a great man, but a lot more reserved than Francis.”

On Friday evening, the assembled were debating whether to schedule Saturday breakfast at 6:45 or 7:00. Francis broke the impasse with a gest, “Make it 9:00,” quipped the pontiff, who famously rises at 4:30 a.m. to pray. The security folks recalled an old Vatican joke: if it’s midnight and the pontiff says it’s 9 p.m., it’s 9 p.m.

On Friday after lunch, the nuncio told Vivolo that the Pope wanted an espresso. It was the only coffee, by the way, that he took during his time at the residence. Then Francis walked into the kitchen. “He starts chatting with Tanya, Lidia, Fortunato, and me like we’re the best of buddies,” says Angelo. “Since he’s a Jesuit, I told him my kids all had gone to Jesuit schools.” The Pope’s response? “Now they’re members of the flock!”

Just before the Pope left the nunciature on Friday, he entered the kitchen, and turned to Angelo. Placing his hand on his loyal waiter’s shoulder, he declared, “Don’t forget to pray for me.” Then he drove off in the black Fiat to perform a legendary mass at Madison Square Garden. “For a brief moment,” says Vivolo, “New York stood still.”